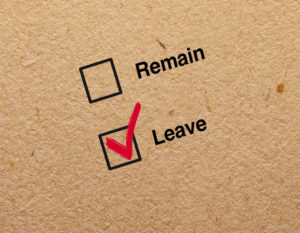 How much change can we see in asset prices in 24 hours? Apparently, a lot as extreme volatility roils the world’s financial markets in reaction to Britain’s decision to vote in favour of exiting the European Union.

It was a wild overnight trading session with an immediate impact to UK stocks and their currency. The FTSE100, United Kingdom’s stock index was dragged down by financial shares to initially open lower over 6 per cent. The British pound seeing a trading range yesterday from above $1.50 US to as low as $1.32, but as we watch the North American markets open this morning, we are seeing financial asset prices begin to settle somewhat.

Markets repricing was the big question leading into this Brexit vote. Many economists and analysts were warning of this risk should we see an exit outcome, and over the next few days investors are watching nervously to see at what price level comes some stability.

Gold, for its safe haven appeal, attracted its typical fear and uncertainty bid driving the precious metal all the way up to an overnight high of $1358 USD/ounce. Having broken the key technical level and psychological level of $1,300, sustained momentum in precious metal prices certainly seems plausible.

There is now another factor driving precious metal markets and that is populism policies have prevailed. This was a referendum on free trade, immigration, and nationalist economic policies. What this contributes to sentiment in other EU member countries like France, Italy, and Germany will weigh on the outlook for the global economy in the months to come. Investors have to question whether this was an isolated event or if the first domino has fallen in the potential unraveling of European Union.

To summarize, there are two immediate concerns for investors and they are posed as questions. Unfortunately at this point all we can do is ask questions as answers are to be determined. First though, is this thin trading and prices overshooting as many exchanges are advising clients to stand aside of these markets, or could there be some momentum behind risk assets like stocks selling off and havens getting a bid?

Second, from a geopolitical stand point is there further implications for populism upheaval from other European nations, and is that weighing on how investors view the global economy?

We are amidst a very fluid moment in the world today. Some have referred to the Brexit Vote as a ‘Lehman Moment’ and given the magnitude of market movements seen today, that comparison seems appropriate. Britain’s membership in the European Union was not perfect. They had a choice, to either stick with the devil they knew, or jump into unknown. They chose the latter. Now we must watch in the coming days how the situation unravels.

Robert Levy is Managing Director of Border Gold Corp., a retail precious metal dealer based in White Rock, BC.