Consolidated Woodjam Copper Corp. [WCC-TSXV; CWMCF-OTC] is continuing the drilling program for the Deerhorn Zone at its 100% owned 64,000 hectare Woodjam project located 50 kilometres east of the community of Williams Lake, BC. Results from the first hole of the drilling program, DH-20-71, have been received and confirm another long mineralized intercept in this portion of the Deerhorn Deposit.

The 2020 drilling program was designed to test continuity at depth in the steeply dipping system within an interpreted feeder zone of the higher grade portion of the deposit. Hole DH-20-71 was drilled to 380.5 metres at a minus 75 degree angle across the strike of the zone to get a deep cross-cut of the zone. A secondary goal was to test the continuity of a second parallel zone to the southwest that had been intersected in two holes drilled in 2012, collared 50 metres to the northwest and southeast of DH-20-71. The results are as follows:

The Company is encouraged by these results as the intercepts yielded long sections of higher grade than other holes in the area. Results from DH-20-72 which was collared in a position to drill down the system below previous drill levels will be reported when received. The third hole, DH-20-73, was lost at 58 metres and hole DH-20-74, another cross-cutting hole, was collared a few metres further to the southwest. Hole DH20-74 has been shut down at 692 metres and the first batch of samples have been shipped to the lab; the remaining core samples will be shipped in a few days once they are prepared. The drilling program is now suspended as unusual amounts of rain and local flooding along with weight restrictions on roads as directed by the BC Forest Service has left the Company unable to move the drill and equipment. Drilling will restart when conditions allow.

Glen Garratt, P. Geo., is the qualified person who takes responsibility for this news release.

Woodjam Copper (TSX-V: WCC) trades on the TSX Venture Exchange and owns a 100% interest in the 64,000 hectare Woodjam copper gold porphyry project located in south-central British Columbia approximately 50 km east of the community of Williams Lake in a low elevation flat to undulating landscape, well accessed by logging roads and in close proximity to hydro power.

For more information on Woodjam please visit the Company’s website at: http://www.woodjamcopper.com 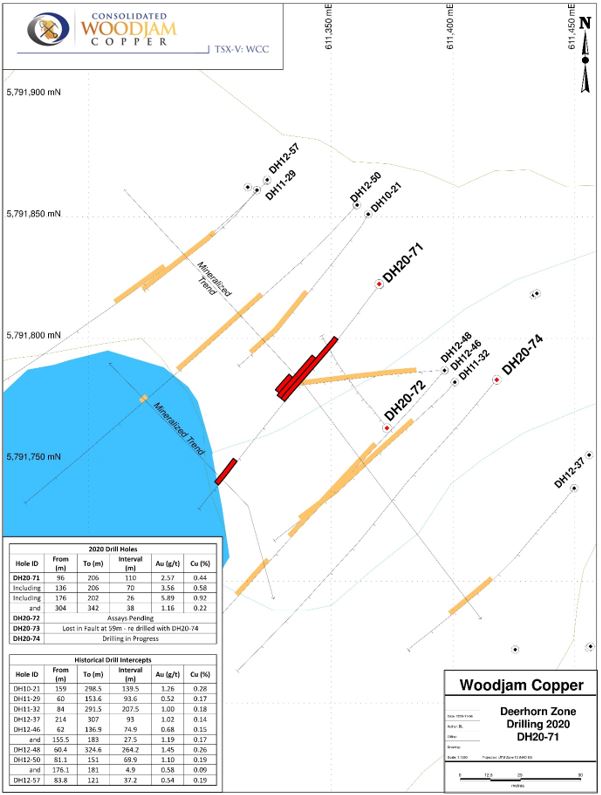