The lithium-bearing claystone formation was encountered in all the holes drilled during Cruz’s first phase of drilling on the â€˜Solar Lithium Project’, including values as high as 1,300 ppm/Li (announced on January 17, 2022). Cruz Management cautions that past results or discoveries on properties in proximity to Cruz may not necessarily be indicative of the presence of mineralization on the Company’s properties.

Jim Nelson, President of Cruz Battery Metals stated, “We are encouraged that the first hole of the phase II drill program has encountered such a long intercept of targeted claystone. At 700 continuous feet, this more than double’s any previous clay intercept from our phase I drill program (345 feet) on the Solar Lithium Project and one of the longest clay intercepts reported in Nevada in recent years. As we continue this phase II drill campaign, we are optimistic about what the remaining program could yield. Cruz has a large footprint and a similar size property to our neighbor, American Lithium, who has a current market capitalization of approximately $750 million. Lithium prices are currently at all-time highs due primarily to the massive demand for electric vehicle (EV) batteries. Cruz’s goal is to locate and provide a new, domestically sourced, battery grade lithium deposit.” 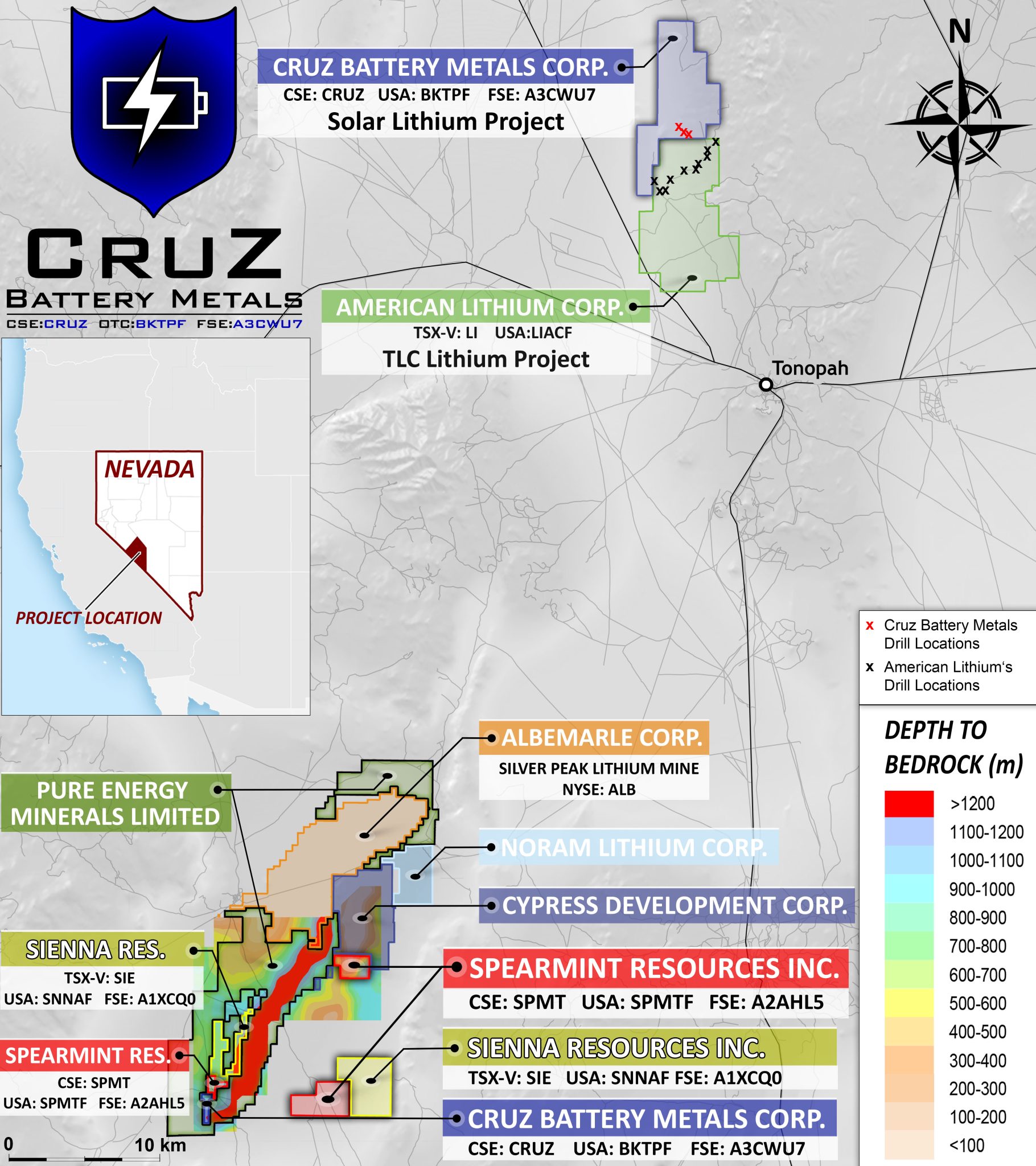 The technical contents of this release were approved by Frank Bain, PGeo, a qualified person as defined by National Instrument 43-101.

Cruz currently has several projects located throughout North America. Cruz’s Nevada lithium projects consist of the 8,135-acre â€˜Solar Lithium Project’ and the 240-acre â€˜Clayton Valley Lithium Project’. Cruz’s three separate Ontario projects are all located in the vicinity of the town of Cobalt, making Cruz one of the largest landholders in this historic silver-cobalt producing district. Cruz’s Ontario projects, which are prospective for cobalt, silver, and diamonds, include the 988-acre Johnson cobalt project, the 6,146-acre Hector cobalt project, and the 1,458-acre Bucke cobalt project. Cruz’s BC project is the 1,542-acre War Eagle cobalt project. Cruz’s Idaho projects include the 2,211-acre â€˜Idaho Cobalt Belt Project’ and the 80-acre â€˜Idaho Star Cobalt Project’. Management cautions that past results or discoveries on properties in proximity to Cruz may not necessarily be indicative of the presence of mineralization on the Company’s properties.

If you would like to be added to Cruz’s news distribution list, please send your email address toÂ info@cruzbatterymetals.com

For more information regarding this news release, please contact:

Neither the CSE nor its Regulation Services Provider (as that term is defined in the policies of the CSE) accepts responsibility for the adequacy or accuracy of this release.