Fremont Gold Ltd. (FRE: TSX-V; FRERF: OTCQB; FR2: FSE) (“Fremont” or the “Company”) is pleased to announce that the drill program at the North Carlin gold project (“North Carlin” or the “Project”) has started. The Project is located at the northern end of Nevada’s prolific Carlin Trend, one of the richest gold mining districts in the world (see Figure 1).

“We have developed a number of compelling drill targets in an underexplored area of the Carlin Trend,” said Blaine Monaghan, CEO of Fremont. “This is an excellent geological setting for the discovery of a major gold deposit.”

The Company has identified several high-priority drill targets at North Carlin based on soil geochemistry, gravity and magnetic surveys, and the projection of key faults that control gold mineralization in the Carlin Trend. The first drill hole, drill hole NR-1, has been sited at the intersection of the Dee Fault and the Coyote NE Fault on the edge of a large multi-element soil anomaly (see Figure 2). The target is a Carlin-type deposit in lower plate units. 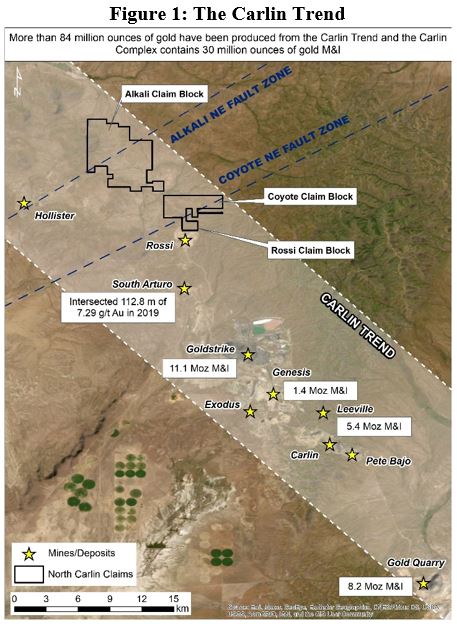 Coyote is located at the intersection of projected Carlin Trend faults and the Coyote NE Fault. Surface geology is upper-plate Ordovician Vining Formation, which is likely underlain by the Roberts Mountain thrust and lower plate Paleozoic carbonate rocks – common hosts of Carlin-type deposits.

Fremont has identified broad areas of chalcedonic breccias and siliceous alteration on surface at Coyote, frequently associated with concealed gold mineralization in the Carlin Trend, and sampling has defined a large arsenic-in-soil anomaly. Arsenic is the most important pathfinder for gold in Carlin-type deposits.

Alkali is located at the intersection of projected Carlin Trend faults and the Alkali NE Fault, a northeast-trending structural corridor that hosts Hollister to the southwest and Tuscarora and Jarbidge to the northeast. The Alkali NE fault cuts through a 1,500 metre by 2,000 metre magnetic high and coincident gold and mercury soil anomalies that occur on the eastern flank of the magnetic high (see Figure 3). Together, the data suggests the presence of gold mineralization beneath alluvial cover. 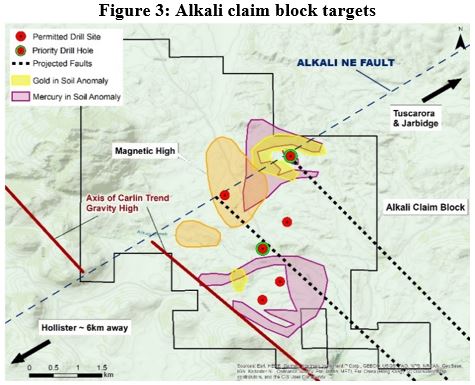 The magnetic high at Alkali may indicate an intrusive body at depth. Magnetic highs representing intrusive bodies coincident with Carlin-type deposits can be found at Gold Standard Venture Corp.’s Railroad-Pinion project at the southern end of the Carlin Trend. They are also known to be associated with epithermal deposits at Hollister and Tuscarora. 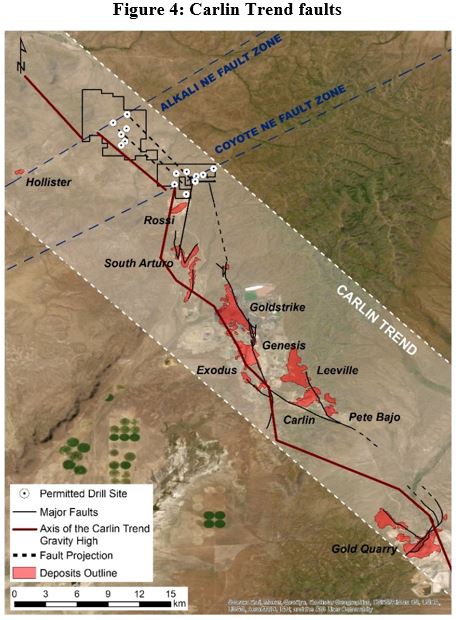 Founded by geologists that have a track record of making multi-million-ounce gold discoveries, Fremont has assembled a portfolio of quality gold projects located in Nevada’s most prolific gold trends. The Company’s property portfolio includes North Carlin, a new discovery opportunity, Cobb Creek, which hosts a historic resource, Griffon, a past producing gold mine, and Hurricane, which has returned significant gold intercepts in past drilling.

The content of this news release was reviewed by Dennis Moore, Fremont’s President, a P.G. and a qualified person as defined by National Instrument 43-101.