Within the area, the stratigraphy is dominated by the sub-horizontal Pliocene Quenamari Formation, which is mainly composed of ignimbrite layers. Uranium anomalies occur on plateaus that are composed of the Upper Yapamayo Member of the Quenamari Formation. Sampling to date has shown that the most significant uranium anomalies appear to be restricted to this assemblage. Mineralization within the area is dominated by very high-grade Autinite veins along ‘enriched fault planes’, with lesser disseminated mineralization. The significant fault planes can vary from up to 2 m thick, while multiple enriched fault planes occur in shear zones up to 150 m across.

Drill program highlights are as follows:

In addition to identifying significant uranium resources, the Macusani region is also highly prospective for lithium. Of note, Plateau Uranium’s Macusani projects, which are adjacent to Fission 3’s projects are also host to substantial quantities of Lithium within several uranium deposits, specifically: resources of 52.3Mt at 0.13% containing 67,000t Li2O (Indicated) and 87.7Mt at 0.12% containing 109,000t Li2O (Inferred). Fission 3 believes that its ground is similarly prospective to host anomalous lithium and samples from Fission 3’s drill program will also include assaying for lithium.

Ross McElroy, COO, and Chief Geologist for Fission 3, commented, “This upcoming drill program at Macusani is a very exciting next step and will represent the first drill holes to be drilled on the property. Mapping and prospecting has not only discovered numerous uranium in bedrock anomalies on the Llama trend, with peaks assaying as high as 24.48% U3O8, it has validated the model that the same mineralized trend that hosts shallow-depth uranium and lithium resources on adjacent projects appears to be present on our claims. Our Macusani Project represents an important project with high-grade uranium mineralization and excellent drill ready targets in a highly prospective new uranium district in Peru, where the infrastructure is well-established and exploration costs are low.”

The drill contract has been awarded to Muchik Corp SAC of Lima and is expected to commence in late May. Fission 3.0 Corp. is a Canadian based resource company specializing in the strategic acquisition, exploration and development of uranium properties and is headquartered in Kelowna, British Columbia.

The Macusani property is located within southeastern Peru. Fission 3.0 Corp. holds the rights to 9 claim blocks encompassing 51 kmÂ². The district is mining-friendly, has a mild climate and has solid infrastructure, including all-weather roads and low-cost power.

Updated maps can be found on the Company’s website at http://fission3corp.com/projects/macusani/maps/ 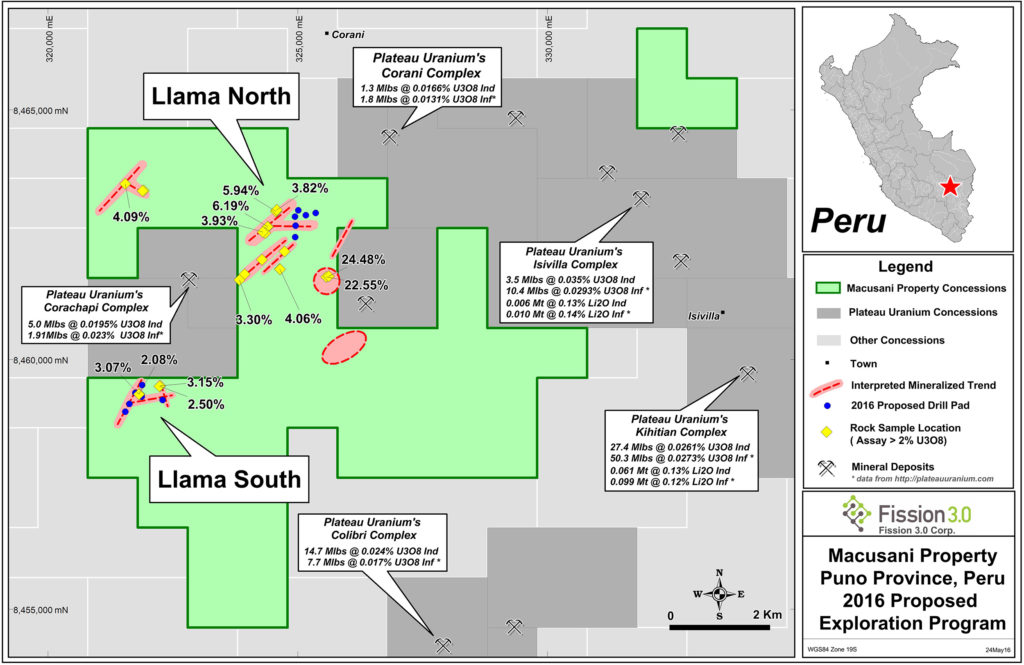