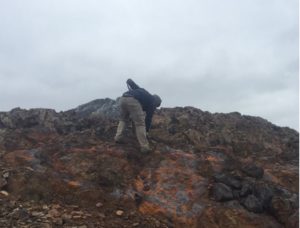 Garibaldi Resources Corp. [GGI-TSXV] is an exploration company with properties in some of the most prospective mining regions of Mexico and British Columbia. At the company’s newly acquired Brass Hill area, within their expanded E&L Project, recent regional sampling of several sulphide and precious metal occurrences, “has returned exceptionally high zinc values and highly anomalous gold and copper” reports the company.

Brass Hill is 2.7 km northeast of the company’s E&L Ni-Cu-Au deposit at Nickel Mountain in northwest BC’s prolific Golden Triangle. In May, Garibaldi Resources announced that it had increased its landholdings in the Golden Triangle nearly 10-fold through acquisitions.

The newly-acquired Brass Hill area is described as  resting “along faults trending east-west toward the E&L Ni-Cu-Au deposit and the associated Q magnetic anomaly which remains untested below the massive sulphide outcrop.”

Steve Regoci, Garibaldi President and CEO, stated: “Brass Hill helps confirm the geologically robust diversity of this very under-explored area which covers the 23 sq. km E&L Project, highlighted by the Ni-Cu-Au deposit we’re advancing at Nickel Mountain where detailed progress updates are expected soon. Much has been overlooked the last 50 years in this rich district, and we’re taking full advantage of that.”

The company states that rock samples were taken from outcrops at two of several MINFILE showings at Brass Hill:

Showing A (three chip samples) returned zinc values of 55.9% and 42.4% from strongly disseminated to massive chalcopyrite, sphalerite and pyrite in two samples from different sections of a zoned sulphide lens, while the third sample from adjacent wall rock in disseminated sulphides returned 1.2% Zn. Copper grades ranged from 1.0% to 7.2% Cu in the three samples while silver values ranged from 11 g/t to 56 g/t Ag. Highly anomalous gold is also present in all three samples.

Garibaldi Resources cautions investors that the samples are “selective samples and are not considered to be representative of the mineralization hosted within the target area”.