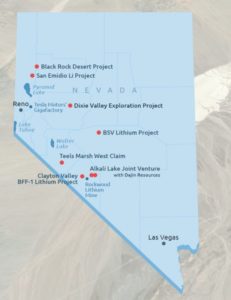 The San Emidio Desert Project consists of 143 placer claims in total, covering about 1,156 hectares (4.5 square miles) of playa and alluvial fan in the San Emidio Desert, Nevada, about 98  km north-northeast of Reno, Nevada. The basin is fed by anomalous lithium bearing geothermal fluids interpreted to be meteoric waters heated by relatively deep circulation in the earth’s crust.

The company states that the results are important in that they demonstrate that dissolved lithium has been transported into this portion of the San Emidio Desert and is available for potential concentration by evaporative brines.

In August, Nevada Energy Metals announced encouraging results from a sampling program at their 100% owned Big Smokey Valley Project. The geochemical sampling program was designed to test for lithium values in surface soils and/or playa evaporates.