In conversations about lagging resource investments and depressed markets I have heard it said that, what we need, to get investors excited about gold and the resource industry in general again, is a really great discovery story. That may be true, but just how likely is a major discovery, especially a major gold discovery?

The chart below provides an interesting, if sobering, juxtaposition of gold exploration spending and gold discoveries. Palisade research defines a major discovery as “either containing a million ounces in reserves, or at least two million in resources”. It appears that explorers have to spend a lot more money to discover a lot less gold. In 1992, an exploration investment of less than US $2 billion resulted in 16 major gold discoveries; a $6 billion investment in 2012 resulted in only four discoveries. Does that mean gold is four times rarer and four times more valuable now than it was in 1992?

In 1992 gold started the year at US $559.47 per ounce and ended the year at US $608.80 per ounce. The price of gold as of July 20, 2016 is US $1,313.70 per ounce. So it would seem gold is currently undervalued when cost and rarity are factored in. With exploration investment falling dramatically after 2012, it begins to look even less likely that there will be a market moving gold discovery. 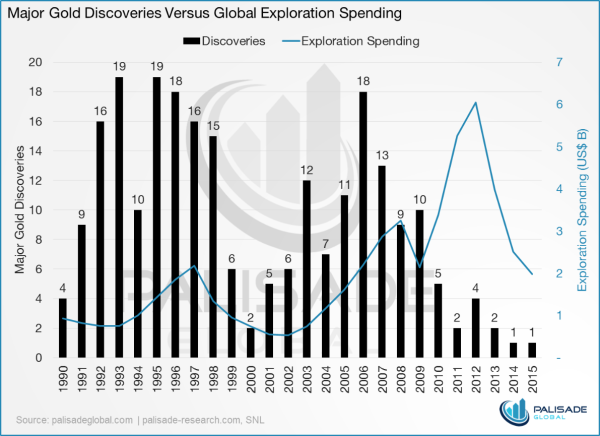 Then there is grade. We have all heard, that when it comes to gold, “Grade is King”. But not only are there fewer gold discoveries being made, average gold grades are also on the decline. Deposits need to be much larger in order to qualify as major and as a result the mines need to be larger in order to process the tonnage required to extract a million ounces of gold. The following chart published by CaseyResearch.com illustrates declining gold grades between 1998 and 2012. 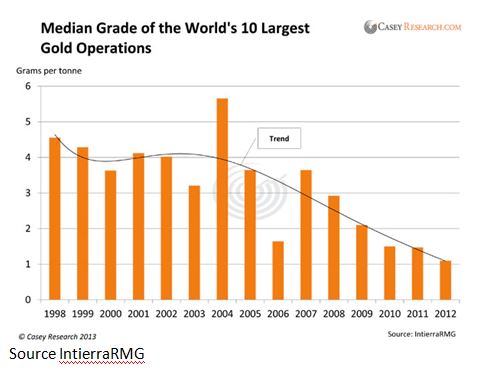 The above chart contradicts the “Grade is King” mantra; it seems size really does matter after all, especially when it comes to making lower grade deposits profitable. Though these charts and numbers focus on exploration investment and grade, it is important to remember that geopolitical, environmental, permitting challenges, just to name a few, can shelve even a major discovery, that is if a company can raise the money required to make the discovery in the first place.

I asked exploration geologist, Danae Voormeij, P.Geo, of Mynah Exploration, who has many years’ experience exploring for gold to comment on how difficult it is to make significant gold discoveries and why. Voormeij said, “I’m not surprised at the low number of major gold discoveries. Ten years ago it was so easy to raise the money for a new gold play. These last four years I have had to work much harder at convincing investors of the merits of a new grassroots project. If I had brought forward an advanced gold project that already had a NI 43-101-compliant resource and could produce gold in a few years, it would have been fairly easy to get $50 million, but no one wants to invest even $1-$5 million in early stage projects anymore.”

Funding isn’t the only challenge according to Voormeij who added that, “Even if money wasn’t an issue, a lot of ground has already been covered. The geologist has to be innovative in their exploration targeting. In my search for gold deposits I’ve always targeted first mover terrain; gone to countries no one could or wanted to go before, and ended up working in places like Suriname, Madagascar, Uganda and PNG. Some of the benefits are that there is a lot of ground available with high mineral potential that has never been explored by modern methods; you can acquire vast land packages and labour is inexpensive.”

For those exploring closer to home, Voormeij suggested they, “could target abandoned gold mines in their own province, stake the land online and drill at depth beneath them to find new ore shoots, although this requires a large budget and concentrated examination of historic drill data. The geologist would have to make a very convincing presentation to get investors interested.”

It doesn’t seem unreasonable to think, that eventually, the price of gold, in order to reflect its increasing rarity, will increase as its fundamentals become even more apparent to investors as miners scramble to replace mined out reserves.