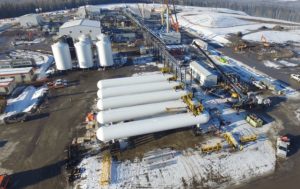 Painted Pony Petroleum Ltd. [PPY-TSX] provides the following update on the commissioning by AltaGas Ltd. [TSX-ALA] of the Townsend Facility. The facility is a 198 MMcf/d natural gas and liquids processing facility located in the Townsend portion of Painted Pony’s Montney assets in northern BC.

Painted Pony is pleased that the capital cost of the facility continues to trend below budget as a lower final cost will reduce the capital lease fee amount paid by the company on the Facility.