â€œThe Golden Arrow technical team has a keen interest in Chile as a mature mining jurisdiction that currently offers undervalued projects with excellent upside and the potential for low development costs, with reasonable acquisition and transaction fees.Â  Â Â Â The team is enthusiastic about expanding the Companyâ€™s activities in Chile, and has reviewed dozens of precious and base metal projects to select for further evaluation those with the best potential for value creation. With copper prices rising rapidly, the Rosales Project has emerged as an excellent candidate, with the opportunity for both high-grade copper and additional metals,â€ stated Joseph Grosso, Golden Arrow Executive Chairman, President and CEO.

The Rosales Project is adjacent to claims hosting the currently operating small-scale underground Margarita mine, which exploits a copper stockwork zone with malachite-azurite-cuprite-chalcocite mineralization. The Margarita mine lies along a structural trend that continues to the southwest onto the Rosales Project. Mineralized occurrences along this trend on the Rosales Project were sampled and returned values between 0.37% and 4.37% Cu from five rock chip samples in an area of 100 x 200 metres. [Golden Arrow cautions that proximity to a mineralized occurrence does not indicate that mineralization will occur in sufficient quantity or grade on Golden Arrowâ€™s property that would result in an economic extraction scenario.]Â  Additional initial sampling throughout the Project outlined several other target areas, including approximately three kilometres to the northwest, where samples returned up to 5.74% Cu (see Figure 1: https://bit.ly/32z6Vs7). Based on the initial results, Golden Arrow has applied for an additional 824 hectares of adjacent mineral rights.

The 1,450 hectare Rosales Project is road-accessible and is situated less than 90 kilometres from the mining centre of Copiapo, with world-class exploration and mining infrastructure readily available. The Company is embarking on a Phase 1 exploration program that is expected to include detailed mapping and sampling, as well as ground magnetics and IP/resistivity geophysical surveys.

The Rosales Project is underlain by Jurassic-aged volcanic-sedimentary sequences, overthrust to the east by Triassic aged sediments. These sequences were later intruded by a dacitic dome and related felsic dykes, of probable Paleocene-Eocene age. Finally, a sinistral strike-slip fault system was emplaced to the east of the project where the Margarita Mine is found. 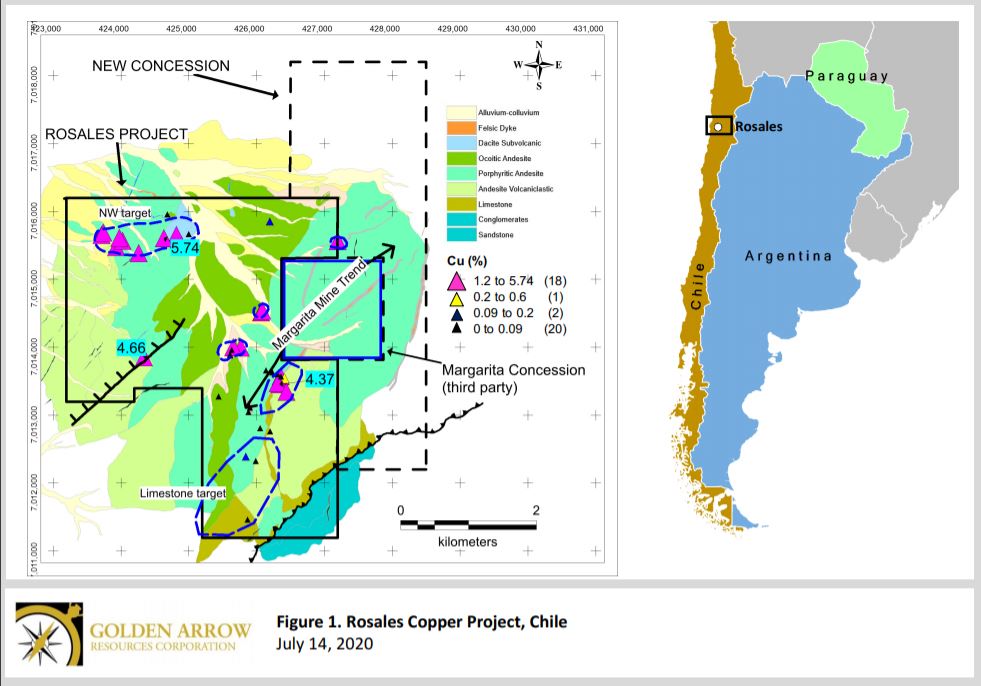 The MMT is a 3.5-kilometre-long structural corridor, oriented northeast-southwest, mainly defined by a felsic dyke. Situated within the corridor, the Margarita Mine is a small operating underground mine with mineralization known to extend to at least 200 metres depth; the mined zone is open at depth (L. Bocanegra, Pers.Comm June 2020). Plus 1% copper values are hosted in crackle breccias and veins along lithologic boundaries and fault traps, extending outwards from the structural corridor up to 200 metres. Approximately one third of the southwest part of the MMT is located within the Rosales Project, and similar mineralization has been found in this part of the trend on the Rosales property at surface. Chalcocite and chrysocolla was identified in outcrop, filling fractures and disseminated in the andesites, in an area covering 100 x 200 metres.Â  Five rock chip samples from this area averaged 2.53% copper with a highest value of 4.37 % Cu. There are further indications of a manto-type mineralization two to four metres thick in this zone.

Based on geological mapping interpretation, the projected strike extension of the MMT to the southwest on the Rosales concessions should intercept a limestone unit at the base of the Jurassic sequence which could be a prospective host for replacement style copper mineralization.Â  This conceptual target will be further evaluated with geophysical methods.

The NW Target is located 2.7 kilometres to the northwest of the MMT. It includes outcrop with veinlets and fractures hosting quartz-chalcocite-copper oxides within an area measuring 1,500 by 400 metres. This mineralization is hosted by porphyritic andesite and dacite, which may represent a dome complex. Eight chip samples collected from old trenches and pits throughout the target area averaged 3.19% Cu and 13.9g/t Ag with a highest value of 5.74% Cu and 37.1g/t Ag. Most of the chip samples were taken over 2 metres of width from trenches between 50 and 400 metres apart. The anomalous silver values together with the presence of low temperature opaline-silica veinlets in the dacite suggests a possible epithermal system at depth. Two samples from the east end of the target of quartz-chalcedony veins contained low metal values.

Reconnaissance sampling also detected four other showings with mineralization in old pits as shown within blue outlines in Figure 1. Six samples returned values ranging from 1.42% to 4.66% Cu; Additional mapping and sampling work is planned to further assess these areas.

Following the receipt of these encouraging initial results, Golden Arrow has applied for new concessions to cover the east and north extension of the MTT, adding 825 new hectares to the project. These applications are in progress.

The Company also wishes to report that it is not proceeding with its option of the Indiana Gold-Copper project in Chile.

Field samples were shipped for preparation and analysis at ALS Laboratories, an internationally recognized assay service provider. Samples were prepared at their facility in Copiapo, Chile and assayed for gold by Fire Assay/Atomic Absorption finish and analyzed for a multi-element package by ICP-OES following a four-acid digestion at their laboratory in Lima, Peru.

The results of the Company’s exploration program have been reviewed, verified (including sampling, analytical and test data) and compiled by the Company’s geological staff under the supervision of Brian McEwen, P.Geol., VP Exploration and Development to the Company.Â  Mr. McEwen is a Qualified Person as defined in National Instrument 43-101, and has reviewed and approved the contents of the news release.

Golden Arrow Resources Corporation is a mining exploration company with a successful track record of creating value by making precious and base metal discoveries and advancing them into exceptional deposits. The Company is well-leveraged to the price of gold, having recently monetized its Chinchillas silver discovery into a significant holding in precious metals producer SSR Mining Inc.

Golden Arrow is actively exploring a portfolio that includes a new epithermal gold project in Argentina, a district-scale frontier gold opportunity in Paraguay, a base-metal project in the heart of a leading mining district in Chile and more than 180,000 hectares of properties in Argentina.

Forward-looking statements are subject to a number of risks and uncertainties that may cause the actual results of the Company to differ materially from those discussed in the forward-looking statements and, even if such actual results are realized or substantially realized, there can be no assurance that they will have the expected consequences to, or effects on, the Company. Factors that could cause actual results or events to differ materially from current expectations include, among other things: the impact of COVID-19; risks and uncertainties related to the ability to obtain, amend, or maintain licenses, permits, or surface rights; risks associated with technical difficulties in connection with mining activities; and the possibility that future exploration, development or mining results will not be consistent with the Companyâ€™s expectations.Â  Actual results may differ materially from those currently anticipated in such statements. Readers are encouraged to refer to the Company’s public disclosure documents for a more detailed discussion of factors that may impact expected future results. The Company undertakes no obligation to publicly update or revise any forward-looking statements, unless required pursuant to applicable laws.Â