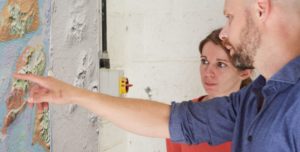 Shares of Hannan Metals Ltd. [HAN-TSXV; HANNF-OTC; C8M-FSE] advanced on Monday December 24 after the company released an update on its exploration activities in Ireland and plans to explore for copper in Peru.

Hannan acquired 100% interest in the Clare zinc-lead-silver-copper project in County Clare from Lundin Mining [LUN-TSX] in September 2016. It consists of nine prospecting licenses covering 35,444 hectares. Roughly US$30 million has been spent on the property, searching for new zinc deposits over the past nine years.

There are two known Waulsortian-hosted zinc-lead deposits on the property, including the flagship Kilbricken prospect and smaller Milltown prospect, where Belmore Resources Ltd. intersected 13.3 metres at 5.8% lead, 10.5% zinc from 45.4 metres while drilling in 1994.

Hannan commenced a resource expansion diamond drill program in April 2017 at Kilbricken. The aim was to focus on the extraction of metallurgical samples and expanding the footprint of the known mineralization beyond the current 1,500 metres of strike length. The company says it is now planning a 20,000-metre drill program to test geological, seismic and soil targets generated both at Kilbricken and across Hannan’s large Clare prospecting license.

“Hannan’s exploration strategy is to open up new exploration search spaces for base metals,” said Hannan Chairman and CEO Michael Hudson. “For example, the company is a leading proponent of seismic technology that has unlocked the potential for new zinc deposits below 200 metres depth in Ireland,” he said. “Along similar lines, the company is now looking to augment and diversify its portfolio into new exploration areas for copper in Peru.”

The highlight from Hannan’s 2018 seismic survey is the definition of the Kilmurry target, considered one of the largest basin-scale fault displacements mapped in Ireland. He said these faults are known elsewhere to form the conduits for base metal mineralization.

Drilling to test Kilmurry is anticipated to start during the first quarter of 2019 when drill permitting is complete.

Lundin retains a 2% net smelter return royalty on all mineral sales. However, Hannan can buy back 0.5% for US$5 million.

Under an agreement, Lundin can also receive additional payments, including a US$5 million bonus in the event of a decision to proceed to mine construction, plus a cash fee of US$2 million if it transfers its rights to the prospecting licenses.

Meanwhile, Hannan said it has identified an opportunity to diversify its base metal portfolio and has staked claim applications for copper in Peru. The company said mineral claim applications have been filed for an area in northern Peru covering 14,800 hectares.  However, at this time, the claim applications are in process and have not been granted.