Japan Gold Corp. (TSXV: JG) (OTCQB: JGLDF) (“Japan Gold” or the “Company“) is pleased to report high-grade gold-silver intercepts from its first drill holes at the Ryuo Prospect, within the Ikutahara Project, Figure 1. The Ikutahara Project is 100% held by Japan Gold and is not included in the Barrick Alliance.

The Ryuo Prospect hosts five areas of workings along a 1 km open ended trend of alteration and mineralization that were developed prior to the government-imposed closure in 1943. Three initial scout drill holes totaling 828.3 m were completed between May and July 2021. Figure 2 shows the geology of the Ryuo Prospect area, the location of the completed drill holes and the pads permitted for future drilling. Table 1 summarizes the drilling results.

The intersection in IKDD21-001 shows that high-grade gold and silver mineralization remains open to depth below the Jinja Vein workings and, having a true width of 4.74 m, is significantly wider than average vein widths reported historically in the underground workings (See Figures 3 and 4).

The intercepted vein zone exhibits multiple phases of hydrothermal brecciation, quartz and quartz-sulphide veining, including ginguro banding. The quartz vein textures are very fine-grained or chalcedonic, indicating the quartz veining is still high in the hydrothermal system and that mineralization should persist to depth.

Drill hole IKDD21-003, located 550 m southwest of IKDD21-001, on a separate parallel structure, targeted mineralization below the Ryuei historical workings. Four separate zones of hydrothermal breccia up to 20 m in down-hole width were intersected down the length of the 350 m drill hole (Figure 5). Zones of fine-grained or chalcedonic quartz and quartz-sulphide vein-fill within the breccias included the following mineralized intercepts (reported as downhole intervals):

These multiple phases of hydrothermal brecciation, quartz and quartz-sulphide veining in IKDD21-003 may represent the upper, flared portions of an epithermal vein system which could possibly coalesce at depth (Figure 5). Elevated path-finder element geochemistry including antimony, arsenic, and mercury associated with the hydrothermal breccias supports this model.

Drill hole IKDD21-002 targeted the northeast strike extension of the Shouei Vein and a coincident CSAMT resistivity geophysical anomaly, Figure 2. The drill hole failed to intersect a significant vein zone apart from a narrow quartz-stockwork / faulted zone which is interpreted as the northeast extension of the Shouei structure. Workings at the Shouei Vein were as extensive as those at the Jinja Vein, but no detailed underground sampling data exists. Historical reports however indicate two parallel veins were exploited at Shouei with shoots that carried gold and silver grades comparable to those at the Jinja Vein1,2. Based on the drill result at the Jinja Vein, 300 m to the northwest, further drilling will be required to test down-dip and southwest strike extensions of the Shouei Vein which remain open.

“The initial drill holes at Ryuo have confirmed wide, high-grade vein mineralization is continuous below the historical workings closed in 1943. The Ryuo prospect has never been drilled and these initial results provide strong encouragement to continue drilling at Ryuo, and the other similarly under-explored Ikutahara prospects.” Commented, Japan Gold’s Vice President of Exploration, Andrew Rowe.

Drilling recommenced on the 6th of September to test the lateral strike extensions of the intercept in IKDD21-001 at the Jinja Vein. A second drill rig is targeting a vertical CSAMT resistivity anomaly that lies below the Taisei workings. Up to five additional drill holes are planned to be completed by the end of November at the Ryuo Prospect. 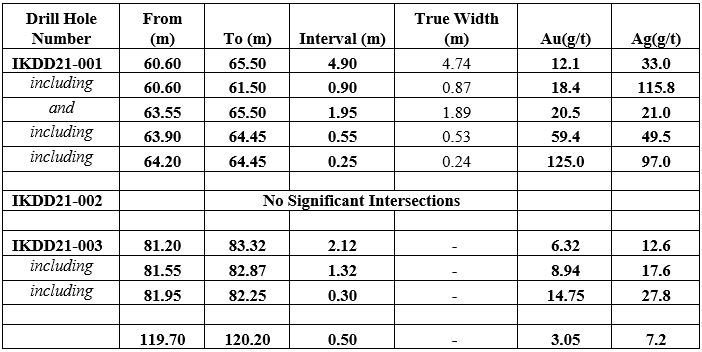 At the Ryuo Prospect, five areas of workings were developed along a 1 km long, open ended trend of alteration and mineralization prior to the government-imposed closure in 1943. Underground sampling carried out in the 1950’s in the Jinja Vein workings revealed high-grade gold-silver mineralization including ‘level 4’ of the workings, which was sampled along a 72 m strike length giving an average grade of 40.8 g/t Au and 193 g/t Ag, average vein width approximately 0.5 m. Figure 3 illustrates a long-section of the Jinja vein workings with the  underground sampling reported by the Metal Mining Agency of Japan (MMAJ)3 and the IKDD21-001 vein pierce-point. High-grade gold/silver quartz veins were mapped on all four of the lower levels of the Jinja vein system. Chip-channel samples were collected across the veins at intervals spaced between 0.3 m and 4.7 m along strike.

On behalf of the Board of Japan Gold Corp.

The technical information in this news release has been reviewed and approved by Japan Gold’s Vice President of Exploration and Country Manager, Andrew Rowe, BAppSc, FAusIMM, FSEG, who is a Qualified Person as defined by National Instrument 43-101.

Note:  The Company’s compilation of underground sampling data at Ryuo has been based on data published by the MMAJ and the Company has not resampled the underground workings or re-assayed samples. The MMAJ report does not refer to QA/QC protocols followed historically.

The drilling results discussed in this news release are from drill core samples obtained by PQ, HQ and NQ-size triple-tube diamond core drilling using a PMC700 and PMC-400 man-portable drill rigs owned and operated by the Company. The drilling program was fully supervised by Company senior geologists at the drilling site.

Drill core was collected in plastic core-trays at the drill site and transported by road in Company vehicles to its core shed storage facility in the nearby Ikutahara Village, located centrally within the project area. The drill core was carefully logged, photographed and sample intervals marked-up along predicted mineralized and selected unmineralized intervals by Japan Gold KK senior project geologists and VP Exploration.

Sample lengths varied from 0.1 to 1.0 m; depending on the positions of geological contacts and variations in vein texture and composition. The core was split by diamond rock saw supervised by project geologists. Half-core sample was collected from the entire length of each designated sample interval and placed into individual-labelled, self-sealing calico bags for secure packaging and transport to the laboratory. The half-core samples weighed between 0.2 to 5 kg depending on the sample length and core size. A Chain-of-Custody was established between the Company and receiving laboratory to ensure the integrity of the samples during transportation from site to the lab. The samples were sent in batches to ALS Laboratories in Vancouver, Canada for sample preparation and assaying.

Certified Reference Materials (CRMs) were inserted by Japan Gold KK at every 20th sample to assess repeatability and assaying precision of the laboratory. In addition, the laboratory applied its own internal Quality Control procedure that includes sample duplicates, blanks & geochemical standards. They report these results with the certified Assay Report. Laboratory procedures and QAQC protocols adopted are considered appropriate. The CRMs and internal QC-QA results fall within acceptable levels of accuracy & precision and are considered to lack any bias.

Japan Gold Corp. is a Canadian mineral exploration company focused solely on gold exploration across the three largest islands of Japan: Hokkaido, Honshu and Kyushu. The Company has a country-wide alliance with Barrick Gold Corporation to jointly explore, develop and mine certain gold mineral properties and mining projects. The Company holds a portfolio of 31 gold projects which cover areas with known gold occurrences, a history of mining and are prospective for high-grade epithermal gold mineralization. Japan Gold’s leadership team represent decades of resource industry and business experience, and the Company has recruited geologists, drillers and technical advisors with experience exploring and operating in Japan. More information is available at www.japangold.com or by email at info@japangold.com

Neither the TSX Venture Exchange nor its Regulation Services Provider (as such term is defined in the policies of the TSX Venture Exchange) accepts responsibility for the adequacy or accuracy of this release. This news release contains forward-looking statements relating to expected or anticipated future events and anticipated results related to future partnerships and the Company’s 2021 gold exploration program. These statements are forward-looking in nature and, as a result, are subject to certain risks and uncertainties that include, but are not limited to, general economic, market and business conditions; competition for qualified staff; the regulatory process and actions; technical issues; new legislation; potential delays or changes in plans; working in a new political jurisdiction; results of exploration; the timing and granting of prospecting rights; the Company’s ability to execute and implement future plans, arrange or conclude a joint-venture or partnership; and the occurrence of unexpected events. Actual results achieved may differ from the information provided herein and, consequently, readers are advised not to place undue reliance on forward-looking information. The forward-looking information contained herein speaks only as of the date of this News Release. The Company disclaims any intention or obligation to update or revise forward‐looking information or to explain any material difference between such and subsequent actual events, except as required by applicable laws.