MONARCH GOLD CORPORATION (“Monarch” or the “Corporation”) (TSX: MQR) (OTCQX: MRQRF) (FRANKFURT: MR7) is pleased to announce the first set of results from its 2020 surface exploration diamond drilling program on its wholly-owned Beaufor Mine project, 20 kilometres northeast of Val-d’Or. The results include a significant number of high-grade assays, including 535 g/t over 0.5 metres, 180 g/t Au over 0.5 metres and 148.5 g/t au over 0.5 metres.

The Beaufor Mine began commercial production in the early 1930s and over the years has produced over 1.1 million ounces of gold. The mine is currently on care and maintenance, which has given Monarch an opportunity to complete a 3D compilation and targeting program to identify, define and drill exploration targets throughout the mine area. In June 2020, the Corporation initiated a 42,500-metre diamond drilling program to test two types of targets: the areas around historical high-grade intersections near the existing underground infrastructure, and isolated resource blocks, which are typically defined by a single drill intersection. These “near-mine” exploration targets can be tested from the existing underground workings or by shallow holes drilled from the surface. Currently, 275 exploration holes are in the process of being drilled or planned to be drilled, and if positive results are received, additional holes will be drilled to allow the zones in question to be converted into resources and ultimately reserves to be included in a future mine plan. Along with the surface drilling, the underground portion of this exploration program has been ongoing since June 2020 with four underground drill rigs. The first series of underground assay results were reported in a press release dated October 1, 2020.

A total of 4,787 metres of drilling in 21 surface drill holes were completed on the Beaufor property, representing 11% of the planned program. These holes were aimed at testing targets developed through the 3D modelling program undertaken on the property that included extensions of high-grade intersections or previously defined resource blocks. Many of these previously defined targets coincide with Priority 1 type targets as defined by Goldspot using their AI technology. These shallow, near-surface targets, located between a depth of 50 to 325 m, are all located within a 1 km radius of the Beaufor mine shaft. All the target areas are easily accessible from the existing underground workings, with minimal new underground development required.

Complete assay results have been received for 14 of the 21 surface exploration holes. Ten of the holes intersected anomalous gold mineralization, which is considered good given the characteristic nuggety-style gold distribution. The best intersections are shown in the table below. Several of the holes have multiple intersections due to the stacked nature of the mineralization. The intersection widths in these surface exploration holes are reported as core lengths, but are expected to represent 85 to 100% of the true thickness based on known vein orientations. High-grade intersections were not capped, as the vein interpretation and statistics have not been finalized for the zones. The locations of the new mineralized intersections are shown in figures 1 and 2, attached.

Good continuity of the gold mineralization was seen in the different clusters of recent surface drill holes.

A similar vein structure with anomalous gold was intersected in holes BES-20-018 and BES-20-019. The best intersection, located approximately 20 metres above this vein, assayed 34.20 g/t Au over 0.5 m.

“Our second set of drill results from our program on the Beaufor property continue to show excellent results,” said Jean-Marc Lacoste, President and Chief Executive Officer of Monarch. “These near-surface intersections are important as they demonstrate that significant gold mineralization still exists outside of the main orebody. Developing resources and reserves in other parts of the mine, outside of the main deposit yet within easy access of the current underground development, is important to permit more flexibility in future mining operations. We plan to continue with our current exploration program aimed at identifying and drill testing high-grade veins and vein extensions, with the ultimate goal of restarting gold production at the Beaufor Mine within 8 to 14 months to take advantage of the very favourable gold market.” 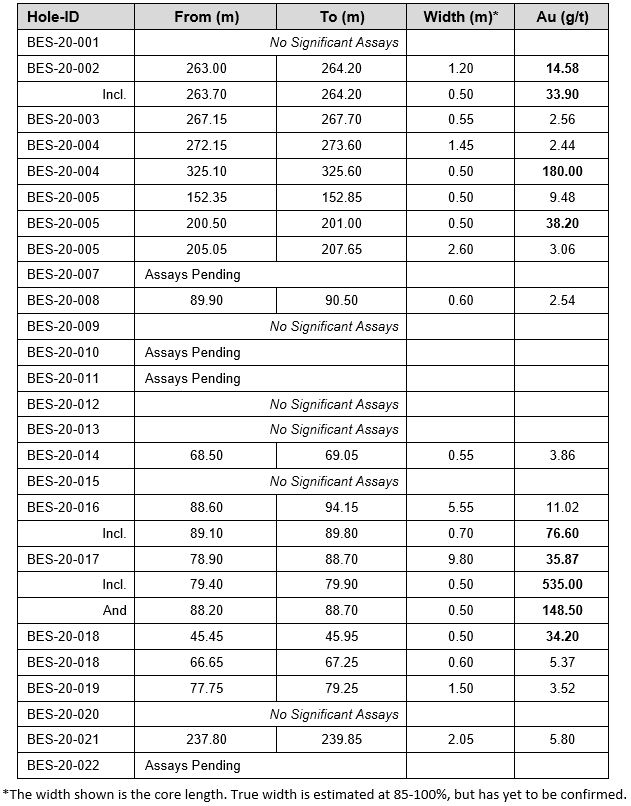 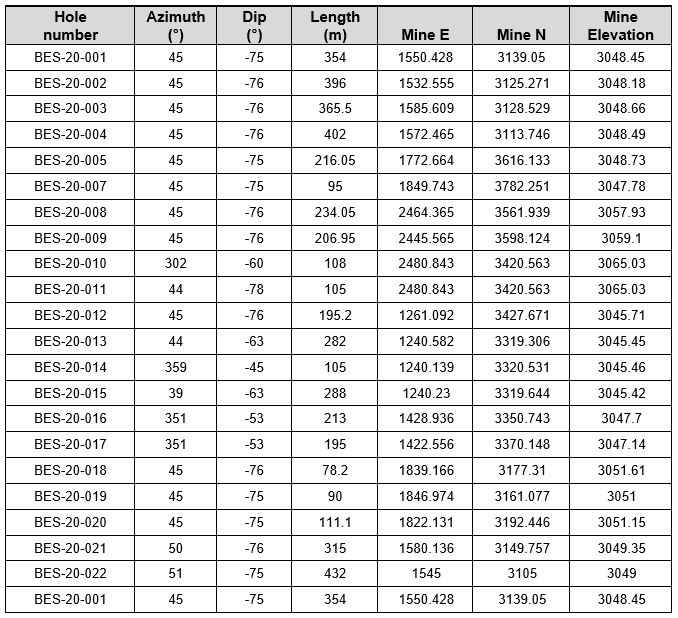 Sampling consists of sawing the core into equal halves along its main axis and shipping one of the halves to the laboratories of ALS Canada in Val-d’Or, Quebec and AGAT in Mississauga, Ontario, for assaying. The samples are crushed, pulverized and assayed by fire assay, with atomic absorption finish. Results exceeding 3.0 g/t Au are re-assayed using the gravity method, and samples containing visible gold grains are assayed using the metallic screen method. Monarch uses a comprehensive QA/QC protocol, including the insertion of standards and blanks.

The technical and scientific content of this press release has been reviewed and approved by Christian Tessier, P.Geo., the Corporation’s qualified person under National Instrument 43-101.