Musk Metals Corp. (“Musk Metals” or the “Company”) (CSE: MUSK) (OTC: EMSKF) (FSE: 1I3) is pleased to announce that it has entered into an agreement to acquire a 100% interest in the Pakeagama Lithium claims, located in the “Electric Avenue” pegmatite field of northwestern Ontario.  The property consists of four contiguous mining claims covering approximately 1,490 hectares. Musk’s Pakeagama property is contiguous to Frontier Lithium’s (“FL”: TSX.V) claim group and only 3km south of the “PAK” and “SPARK” lithium deposits (see Figure 1).

The nearby PAK Lithium deposit contains one of North America’s highest-grade, large tonnage hard-rock lithium resources in the form of a rare low-iron spodumene. The PAK deposit has a mineral reserve in the proven and probable categories of 5.77 MT averaging 2.06% Li2O and hosts a rare technical/ceramic grade spodumene with low inherent iron (below 0.1% Fe2O3). The Spark Deposit, located 2.5km northwest of the PAK, was winner of the “2019 Discovery of the Year Award”. The Spark Deposit has a mineral resource estimate of 3.2 MT averaging 1.59% Li2O (indicated) and 12.2 MT averaging 1.36% Li2O (inferred).  Frontier Lithium recently completed a Preliminary Economic Assessment that outlines life of project revenue of $8.52 billion over 26-year total project life, and a chemical plant producing 23,174 tonnes of battery-quality lithium hydroxide monohydrate (LiOH-H2O) per year (See FL: TSX.V news dated February 16th 2021).

Figure 1. Proximity of Musk Metals claims to the PAK and Spark lithium deposits of Frontier Lithium 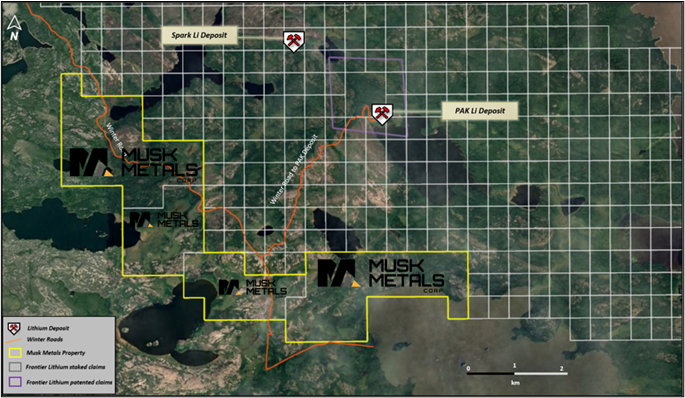 Musk Metals CEO and Director, Nader Vatanchi states, “Musk’s second lithium project acquisition is situated next to one of North America’s highest-grade, large tonnage hard-rock lithium resources in Ontario’s Electric Avenue. Musk Metals has continued to diversify its portfolio of highly prospective exploration projects to include the “Pakeagama” lithium property as the Company continues to maximize shareholder value by participating in the battery revolution.”

The Electric Avenue is host to four known lithium bearing pegmatite deposits thus far, all occurring in a northwest trending belt proximal to the Bear Head Fault (Figure 1). The Bear Head Fault is a regional crustal scale structure that is traceable for over 400km through Ontario and Manitoba and is associated with the emplacement of peraluminous fertile granites host to the spodumene-rich lithium bearing pegmatites. Studies by Breaks et al. (OFR6000) in 1998 concluded that the Pakeagama Lake pegmatite field was one of the largest and most evolved rare-element pegmatite systems in the Superior Province of Ontario. Within Musk’s Pakeagama lithium claims are six pegmatic granite occurrences that have been mapped by the Ontario Geological Survey (Map P3224). The property is also strategically located along the Sandy Lake First Nations winter road and the PAK lithium deposit winter road. 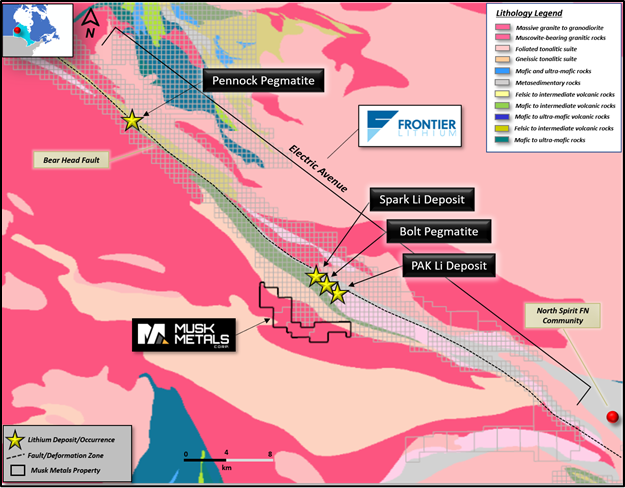 Mike Kilbourne, P. Geo, an independent qualified person as defined in National Instrument 43-101, has reviewed and approved the technical contents of this news release on behalf of the Company.