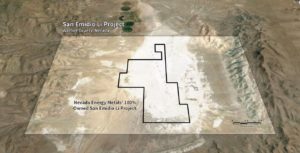 Nevada Energy Metals Inc. [BFF-TSXV] reported very encouraging results from a sampling program designed to test for lithium values in surface soils and/or playa evaporates at its 100%-owned San Emidio Desert project located about 98 km north-northeast of Reno, Nevada. A total of 172 samples were collected with lithium values ranging from 30.3 to a high of 600 parts per million (30 – 600 mg/l) with a median value of 215 ppm (215 mg/l). Thirty-two samples were above 300 ppm (300 mg/l) and 13 were over 400 ppm (400 mg/l).

Geochemical sample points were arranged on a grid pattern of 17 east-west lines spaced 400 metres apart north-south, with stations every 200 metres along the lines.

The San Emidio desert project consists of 143 placer claims in total, covering about 1,156 hectares (4.5 square miles) of playa and alluvial fan in the San Emidio Desert. The property is adjacent to the nine-megawatt Empire geothermal power generation facility of U.S. Geothermal Inc.

Gravity survey results indicate the depth of valley fill to be approximately 1,800 metres and that there is subsurface closure of the valley a short distance to the north of the claim block. The basin is fed by anomalous lithium-bearing geothermal fluids interpreted to be meteoric waters heated by relatively deep circulation in the Earth’s crust.

The San Emidio Desert results are comparable with those obtained at Clayton Valley, Nevada (300 to 1,100 ppm Li). Additional work is required to determine what relationship, if any, exists between lithium values in brine concentrates and lithium values found in surface soils and/or playa evaporates.

Of note, the results show that dissolved lithium has been transported into this portion of the San Emidio Desert and is available for potential concentration by evaporative brines.