After the discovery of the Comstock Lode in 1859, the first major discovery of silver ore in the United States and named after American miner Henry Comstock, a silver rush ensued that led to mines being built and communities such as Virginia City being established. All this activity resulted in Nevada known as “The Silver State’ although the Comstock Lode also carried substantial quantities of gold.

Between 1859 and 1979, these mines produced more than $500 million in silver and gold. The mines declined after 1874, although underground mining continued sporadically into the 1920s. But this was only the beginning. Important discoveries of lead, zinc, copper, tungsten, iron, salt turquoise and vanadium have also been found that led to many mines being built.

However, a monumental event was to take place that would propel Nevada into the biggest of the gold mining big leagues – the discovery of ‘invisible gold’ deposits that were later to be called Carlin-type deposits. The Carlin gold discovery in 1962 was one of the most significant events and ranks up there with the discovery of the Comstock in importance to Nevada mining.

The Carlin trend, a belt extending northwest and southeast from the original discovery, now contains more than 20 mines and is one of the major gold-producing regions of the world.

Nevada Carlin-type gold deposits (CTGD) have a combined endowment of more than 250 million ounces, which are concentrated (85%) in only four trends or camps of deposits: Carlin, Cortez (Battle Mountain-Eureka), Getchell and Jerritt Canyon.

Newmont Mining has been pouring gold in Nevada for over 50 years along a 100-mile corridor in the northern part of the state. Other major players include Barrick Gold and Kinross Gold. These are some of the biggest gold miners in the world.

Along Nevada’s gold trends are numerous old, abandoned gold and silver mines that are currently being explored in light of the prevailing high gold prices.

In recent years, Nevada’s potential for lithium has been in the spotlight, particularly in Esmeralda County near North America’s only lithium mine – Albermarle’s Silver Peak Mine.

Coupled with the fact that the vast majority of Nevada is not built up and available for mineral exploration and it being a pro-mining state means that explorers and miners alike are excited by the tremendous mineral potential the state still offers. 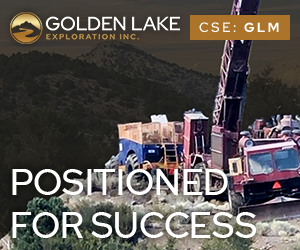 Golden Lake Resources Inc. [GLM-CSE] is currently following up on encouraging exploration results at its 100%-optioned flagship Jewel Ridge gold project near Eureka on the south end of Nevada’s prolific Battle Mountain -Eureka gold trend, along strike and contiguous to the  Archimedes/Ruby Hill gold mining operations to the north (acquired in 2015 from Barrick by private equity firm Waterton Resource Management) and the Timberline Resources advanced-stage Lookout Mountain project to the south.

The Battle Mountain-Eureka gold trend hosts numerous famous gold mines, including Marigold, Cove McCoy, Pipeline, and Cortez Hills to name a few. Between 1976 and 2012, production from these Carlin-type deposits in the Eureka District totaled 1.38 million ounces of gold. 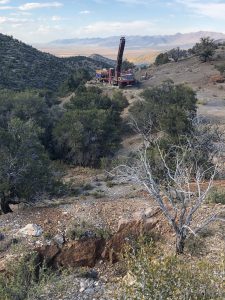 During a recent ten-hole Phase I drilling program, the second hole on the South Eureka Tunnel target, has intersected a significant width of oxide mineralization at depths greater than previously tested. Hole JR-20-05, a vertical Reverse Circulation drill hole, intersected a void (cavity) at 500 feet (152 metres) and, upon extension, intersected strong alteration and oxidation at 600 feet to 675 feet (183 metres to 206 metres), at which depth the hole was still in mineralization but lost due to ground conditions. Alteration of rocks and oxidation are key indicators of a geological setting amenable for gold deposition.

“While the Jewel Ridge gold project has many attributes, the lack of exploration at depth historically provides one of the greatest opportunities. Hitting oxide mineralization at this never-before-tested depth is a very good step in the right direction,” stated Mike England, President and CEO of Golden Lake.

Since the occurrence of alteration and strong oxidization at these depths on the South Eureka Tunnel target represents a new target, the company is proposing to deepen two of its planned holes of the Phase I program to test the deep oxide target. The deepest previous hole on this target was drilled in the 1980s to a depth of 340 feet (104 metres).

Geological modeling of Jewel Ridge is targeting a large tonnage gold deposit with important silver values, over a north-south trend of at least 4 km.

Golden Lake will make necessary site preparations to allow the drilling of deeper holes to depths of 750 to 900 feet (230-275 metres) to test the new deep oxide target. The company’s focus is on Carlin-style disseminated gold deposits, the primary focus in the area since the late 1970s. These types of deposits have been responsible for more than 250 million ounces of Nevada gold production from four trends or camps: Carlin, Cortez (Battle Mountain/Eureka), Getchell and Jerritt Canyon.

The Jewel Ridge property has a data base of over 360 short drill holes (mostly RC), extensive soil and rock geochemistry, and excellent geological mapping. This represents millions of dollars of previous exploration expenditures and allows Golden Lake to fast track the vectoring of high priority targets. Golden Lake will also conduct state-of-the art airborne and geophysical surveys to aid targeting. 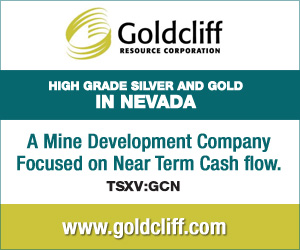 Goldcliff Resource Corp.  [GCN-TSXV; GCFFF-OTCBB] is exploring the 100%-optioned past-producing Rand gold-silver mine (2.5% NSR) located near the community of Hawthorne in the Walker Lane Structural Corridor of Mineral County, southeast of Reno, Nevada.

Located on BLM land, the Rand Mine hosts a low sulphidation epithermal system that was explored to only 137 metres in vertical depth. It has been reported that multi-ounce gold and multi-kilo silver production were shipped during the historic mining days.

With the old underground levels above the water table, company geologists were able to access tunnels and shafts for a recent sampling program. 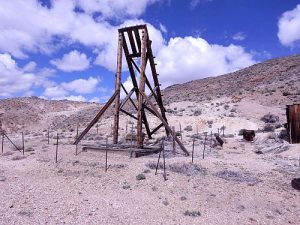 In May, Goldcliff reported the maiden drill program made a new discovery. Hole RD-7, the final hole of the program, intersected a broad zone of disseminated gold mineralization consistent with the grades of many Nevada deposits and open pit mines.

With recent exploration having determined that the high historic gold and silver grades were accurate, Goldcliff is now planning to explore along strike mapping and sampling with the objective of identifying further drill targets.

It is interesting to note that the Newmont has claims surrounding Goldcliff’s Rand Project.

George Sanders, President and CEPO of Goldcliff, points out that the company will have a phased approach to project development; that is, start with a small, direct shipping operation for early cash flow and ramp up production from there.

Goldcliff Resource has 44,689,318 shares outstanding with directors owning close to 40%. 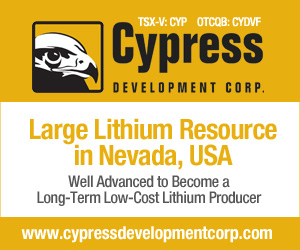 The company has discovered a world-class resource of lithium-bearing claystone adjacent to the Albermarle Silver Peak Lithium Mine, North America’s only lithium brine mining operation that has been in production since 1966.

The August 2020 Estimate includes additional assay data from four drill holes received in June 2020 and was developed using the project’s entire contiguous property boundary. All resources are pit-constrained using property and/or geologic boundaries and are based on a cut-off grade of 900 ppm lithium (Li). 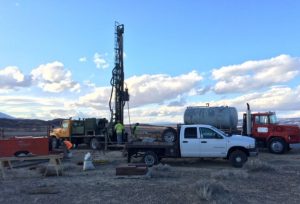 No changes in the PFS mine design or production schedule have been made at this time.

Lithium mineralization occurs within montmorillonite clays throughout the sediments to a depth of at least 120 meters. Metallurgical testing indicates low cost processing can be achieved by leaching with low acid consumption (125 kg/t) and high lithium recovery over 85% Li.

Cypress is currently evaluating alternatives for procurement of sample material and location for the plant recommended in the PFS.

Highlights of the independent May 2020 PFS include an average production rate of 15,000 tonnes per day to produce 27,400 tonnes lithium carbonate equivalent (LCE) annually over a +40-year mine life, based on a Lithium Carbonate price of US$9,500 per tonne.

Capital costs are estimated to be US$493 million with a pre-production and operating cost estimate averaging US$3,329/tonne LCE.

Cypress CEO Dr. Bill Willoughby stated, “This PFS is a major milestone for Cypress. These positive results take us closer to our goal of developing a world-class lithium deposit. Cypress’ land position and resources afford us the opportunity for a long-life project with low operating costs and potential to be a significant source of lithium for the United States.”

The key features of the claystone deposit include its large size, surface exposure and flat-lying nature. These features allow mining with negligible strip ratio (0.15:1) due to minimal overburden and no interbedded waste, and no drilling or blasting in excavation. Metallurgical testing indicates low cost processing can be achieved by leaching with low acid consumption (125 kg/t) and high lithium recovery over 85%. Self-generated power from a 2,500 tpd sulfuric acid plant is included in the project’s costs.

The company is currently overseeing ongoing baseline environmental studies and is sourcing funds for the pilot plant.