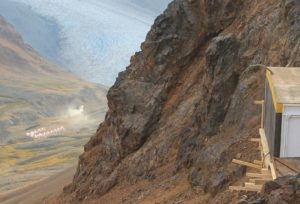 “Melting alpine glaciers have revealed significant new discoveries in the Golden Triangle area of British Columbia during recent years, including Pretium’s Valley of the Kings gold-silver deposit and Seabridge’s Mitchell gold-molybdenum deposit,” said Rob McLeod, President and CEO of IDM. “The new, high-grade gold, silver and molybdenum-bearing structures found over an extensive area at Red Mountain suggest that the Lost Valley area could be the latest discovery in this prolific region of the province. This area was under a glacier when I worked on the Property as a junior geologist in the 1990’s and is now emerging as an exciting new zone of potential significance.”

The Lost Valley area is underlain by a monzonite pluton, ringed by hornfelsed sediments and intruding the sulphide-rich Hillside Porphyry. The intrusive is located approximately 4,000 metres southwest of the Marc/AV/JW Zones, and at 800 metres lower elevation. Multiple sets of veins have been identified and are being mapped and sampled as part of an ongoing surface exploration program. Assays have been received for a total of 66 grab, channel and float/subcrop samples to date from throughout the target area at Lost Valley. Assay values range from trace to 165 g/t Au, averaging 10.5 g/t Au, as well as trace to 1,065 g/t Ag, averaging 81 g/t Ag.

High grades of molybdenum have also been identified at Lost Valley, with all 66 samples ranging from trace to >1.0% Mo, averaging 0.17% Mo. The samples are also found to be strongly anomalous in Rhenium, assaying up to 1.65 g/t Re.

To date, mineralization has been traced over a 1,200 by 1,000 metre area with over 300 metres of vertical relief on the valley walls.

Additional gold and silver mineralization associated with shear-zone hosted quartz veining within sedimentary rocks has been identified at the Waterfall Prospect, a new zone approximately 700 metres southwest of Lost Valley.

The 17,125 hectare Red Mountain Gold Project is in northwestern BC, 15 km northeast of the town of Stewart. Discovered in 1989, the property was explored extensively until 1996 by Lac Minerals Ltd. and Royal Oak Mines Inc., with 466 diamond drill holes and over 2,000 metres of underground development completed, along with extensive engineering and environmental baseline work. Additional studies were completed over the past 12 years by Seabridge Gold Inc., North American Metals Corp. and Banks Island Gold Ltd.

Phase I underground drilling is underway at Red Mountain targeting resource upgrading, as well as metallurgical, geotechnical and hydrological testwork at the Marc, AV and JW zones. Step out holes are also planned along strike and down-dip from the current resources.