NV Gold Corporation (TSXV:NVX)(OTCQB:NVGLF) (â€œNV Goldâ€ or the â€œCompanyâ€) reports that Hochschild Mining (US) Inc. (â€œHOC USâ€), a subsidiary of Hochschild Mining PLC (â€œHochschildâ€) (LSE:HOC), has entered into an option agreement (the â€œAgreementâ€) with it in respect of the Companyâ€™s 100% controlled SW Pipe Gold Project (the â€œPropertyâ€), located along the Cortez Gold Belt approximately 6Â km southwest of the Pipeline Gold Mine operated by Nevada Gold Mines (joint venture between Barrick Gold Corp. and Newmont Corporation).

Highlights of the Option Agreement:

â€œThe close proximity to a larger operating gold mining complex operated by Nevada Gold Mines, and the known low grade gold system present at the SW Pipe Gold Project, provides the opportunity for a major discovery at depth. NV Gold will remain operator of the initial exploration programs on the project and we are excited to work with Hochschild to test the project at depth for extensions of the neighbouring multi-million ounce gold deposit at the Pipeline Mine. Initially the work will be aimed at assessing the potential for mineralization beyond the historic drilling and, in particular, for mineralization within steep â€œfeederâ€ structures, which have not been tested by the historic vertical drilling. This will be an exciting exploration program,â€ commented Peter A. Ball, President and CEO of NV Gold.

About the SW Pipe Gold Project

The SW Pipe Gold Project, strategically located and adjoining claims controlled by Nevada Gold Mines and the Pipeline Mine (refer to Figure 1), is a significant land position covering a known, historical shallow gold system.Â Publicly available reports indicate that the Pipeline Mine is estimated to contain at least 20 million ounces of gold (comprised of past production plus publicly-reported reserves).Â The SW Pipe Project covers 84 claims, or approximately 6.5 square km (2.5 square miles), and is reported to host a shallow, sediment-hosted gold system. 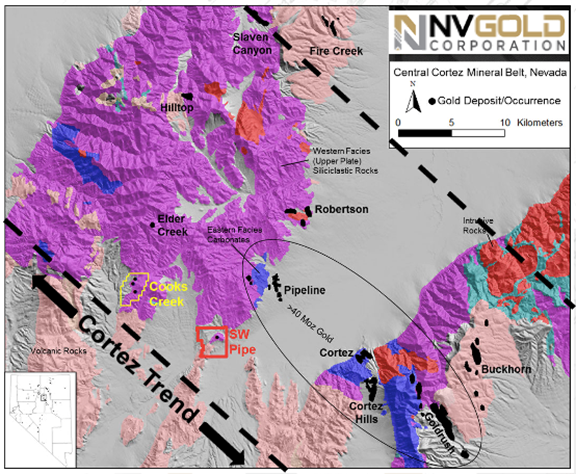 Mineralization at SW Pipe is observed largely within 100Â m of surface, and is reportedly within the Silurian Elder Sandstone, a unit within the western-facies sequence within the upper-plate of the regional Roberts Mountains thrust fault.Â  Historical work by previous operators has identified gold mineralization over a vertical range of at least 320Â m within an area of at least 1,200Â m by 800Â m.

Although the historic exploration data at SW Pipe was generated by reputable companies, NV Gold cannot verify the data or determine the quality assurance and quality control measures applied in generating the data other than to review the assay certificates and drill logs.Â  Accordingly, the Company cautions that the exploration data reported in this news release may not be reliable.

Peter A. Ball, President and CEO of NV Gold also commented, â€œThis is a strategic milestone for the Company to secure an exploration partner like Hochschild.Â  NV Gold controls an extensive portfolio of projects in Nevada, at various stages of exploration, and is currently touring other interested mining companies for potential other joint ventures. In addition, assays from the recently completed drill programs at the Companyâ€™s Slumber and Sandy Gold Project are expected shortly.â€

Quinton Hennigh (Ph.D., P.Geo.) is a Qualified Person pursuant to National Instrument 43-101 and has reviewed and approved the technical information contained in this news release. Dr. Hennigh is a director of NV Gold and is not independent and is also the President, Chairman and a Director of Novo Resources Corp.

This news release includes certain forward-looking statements or information. All statements other than statements of historical fact included in this release, including, without limitation, statements regarding the Companyâ€™s planned exploration activities, the potential for a discovery at its properties, the presence of a shallow, sediment hosted gold system on the SW Pipe Project, the timing of undertaking its work and disclosure of results, are forward-looking statements that involve various risks and uncertainties. There can be no assurance that such statements will prove to be accurate and actual results and future events could differ materially from those anticipated in such statements. Important factors that could cause actual results to differ materially from the Company’s plans or expectations include regulatory issues, market prices, availability of capital and financing, general economic, market or business conditions, timeliness of government or regulatory approvals, the extent to which mineralized structures extend on to the Companyâ€™s Projects and other risks detailed herein and from time to time in the filings made by the Company with securities regulators. The Company disclaims any intention or obligation to update or revise any forward-looking statements whether as a result of new information, future events or otherwise, except as otherwise required by applicable securities legislation.