Few industrial commodities have the exotic appeal of Rare Earth Elements (REEs), a group of 17 elements referred to as the lanthanide series in the periodic table of elements. They are widely used in a variety of industrial applications, with the manufacturing of permanent magnets representing the single largest and most important end use for REEs. This market segment alone accounts for 38% of total forecasted demand.

Permanent magnets are an essential component of modern electronics including cell phones, televisions, computers, automobiles, wind turbines, jet aircraft and many other products. Electric motors that have permanent magnets, such as neodymium magnets, tend to provide better induction, save energy, are light in weight, and generate more power.

REEs also have a strategic role in such military applications as guidance and control, targeting and weapon systems, and communication platforms. As a matter of fact, the typical F-35 fighter contains nearly 1,000 pounds of REEs.

A recent report in the Financial Times alleged that China is considering the placement of export controls on REEs in order to damage U.S. industry and more specifically defense production. Perhaps with this threat in mind, during the last days of the Trump administration overÂ US$800 millionÂ was allocated for REE and strategic minerals research in a pandemic stimulus package.

Under President Biden, the Pentagon awarded aÂ US$30 millionÂ contract to Australian REE company Lynas to begin operations in Texas, with feed stock coming from Australia. Last year the Australian government announced that it will provide financial solutions, loans, guarantees and bonds to companies in the strategic metals space via the Export Finance Australia agency.

China is the world’s largest producer and exporter of REEs, controlling more than 90% of the global supply base with a virtualÂ monopoly. REEs are complex metaurgically and China’s extraction expertise remains unchallenged although some observers believe that China’s refining strengths reflect its higher tolerance for pollution as opposed to any technological edge.

In addition, the necessary production capacities, infrastructure and distribution channels all exist in China within a fairly lax environmental framework including work place safety regulations and low labor costs.

The most rapid growth in REEs has been in demand for new applications including magnets, phosphors, catalysts and batteries. These now account for over 60% of demand and will continue to grow, fueled by heavy investments in clean energy. Canada has some of the largest known reserves and resources (measured and indicated) of REEs in the world, estimated at over 15 million tonnes of rare earth oxides.

There are at least two notable trends in REE markets worth reviewing: the first is China’s continued dominance of the industry while the second is high growth in demand from magnet applications – particularly neodymium-iron-boron magnets, which offer the highest magnetic field per unit of volume.

Analysts predict that domestic production in China will likely flatten from 2022 onwards, the result being that some leading Chinese-based rare earths processors will require increasing quantities of imported mineral concentrates.

China is expected to increase global production of REEs from internal sources, resulting in an overall surplus, however, shortfalls are expected in certain elements, particularly in neodymium andÂ europium, and the heavy REEs such as terbium and dysprosium. Demand for REEs is likely to increase between 7-8% annually some analysts are forecasting.

Internal reports by the Chinese government note that demand for REEs has continued to exceed domestic supply over the past five years which hasÂ  promptedÂ  a surge of imports from miners in the US and Myanmar to satisfy domestic demand.

Neodymium and praseodymium are some of the most sought-after light rare earth elements and they are crucial in products such as motors, turbines and medical devices. High quality speakers use powerful neodymium magnets for that big bass sound. Demand has exploded in recent years with the growth of technology and that demand is expected to climb amid the ongoing race to create a large electric vehicle market.

Owing to low production costs in Asian countries, backed with rising industrialization, manufacturers are investing in economies such as India and China which is propelling the market growth. The positive outlook for the automobile and electronic sectors, coupled with rapid industrialization across developed and emerging economies, will drive the Rare Earth Magnet market size in particular.

David Merriman, an expert on rare earths at Roskill, expects the 2020 China FOB price of US$50,000 per tonne of neodymium oxide to rise to above US$60,000 per tonne by the end of the decade. “As we transition to a low-carbon global economy, the demand for permanent magnets will only grow and is expected to reach about 40% of total demand for rare earths by the end of the decade,” he said.

“Overall, we do expect REE prices for magnet materials to settle at higher levels than in 2019 and 2020, as a result of underlying demand growth and a tight market for neodymium oxide,” he added.

Adams Intelligence believes markets for the magnet rare earths – neodymium, praseodymium, dysprosium and terbium – will remain tight in 2021, especially if China’s State Reserve makes stockpile purchases in the near term. 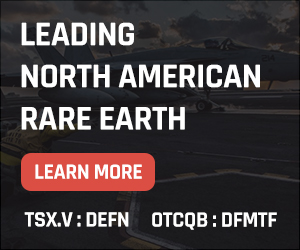 Rare earth elements are a group of 15 elements with tongue-twisting names like praseodymium, neodymium, terbium and dysprosium, and which are vital to green technology and high-tech applications. They fall into two sub-groups: light and heavy, with the heavies being more scarce.

Since the U.S. relies on China, the dominant global supplier, for about 80% of its rare earths imports, security of supply became an issue at the beginning of the last decade when China imposed export restrictions, a move that sparked renewed investor interest in the sector.

China has dominated the rare earths industry for 30 years and there is little indication that this will change any time soon, industry officials say. Now, with a dramatic increase in demand for rare earth magnets needed to drive electric transportation and produce clean energy solutions, the industrial world remains exposed to Chinese dominance.

It means there is a big opportunity for a company like Defense Metals. Its key asset is the 1,708-hectare Wicheeda Light Rare Earth Element Property located approximately 80 kilometres northeast of Prince George, B.C. The property is accessible by all-weather gravel roads and is near infrastructure, including power transmission lines, the CN railway and major highways.

Meanwhile, Defense Metals is working in parallel on all facets of project development including baseline environmental, pilot-scale metallurgical studies; in addition to economic modelling and scenario analysis as it moves towards completion of a preliminary economic assessment (PEA) during 2021.

Defense Metals has engaged SRK Consulting (Canada) Inc. to conduct an economic scenario analysis of its Wicheeda Project that will facilitate decision making related to performing a PEA. The scenario analysis will evaluate the potential of multiple mine development scenarios through the completion of economic trade-off studies, which, subject to results, will form the basis for the PEA.

Funding awarded under the NRC IRAP will cover approximately 70% of the estimated cost of the XRT amenability study test-work, the company said.

The objective of the SRC amenability study is to investigate XRT sorting for the purpose of upgrading Wicheeda REE mineralization prior to downstream processing. Sensor-based sorting has several advantages when applied to REE mining projects in that beneficiation occurs without water and with reduced grinding requirements. (Beneficiation is any process that improves (benefits) the economic value of the ore by removing gangue minerals (unmineralized waste).

The investigation will assess how much gangue can be removed from the head feed.

It will also carry out an iterative study of different sorting sizes to process in the XRT sorter assessing both the grade of the upgraded concentrate and the grade of waste for economic studies whereby the optimum operational parameters can be determined.

XRT sorting has the potential to realize several significant project benefits, including:

The company was notified by its Asia-based adviser, Golden Dragon Capital Ltd., that it has received requests from two leading global REE smelting and separator enterprises to provide samples of Wicheeda REE mineral concentrate for evaluation prior to negotiations of an initial memorandum of understanding (MOU) and subsequent potential mineral concentrate offtake agreements. These requests are the third and fourth REE concentrate evaluation requests received to date, and discussions are currently continuing with several other parties.

These developments are part of a plan to advance Wicheeda along the road to production. The Wicheeda deposit hosts neodymium and praseodymium LREEs and Defense Metals is positioning itself to meet the growing demand for these North American-sourced Light Rare Earth Elements.