The important mining camp of Red Lake in northwestern Ontario, located 535 km northwest of Thunder Bay and less than 100 km from the Manitoba border, got its start in the summer of 1925 when brothers Lorne and Ray Howey discovered gold under the roots of an upturned tree. This discovery led to one of the last great gold rushes in North America and the creation of the Town of Red Lake. By 1926, over 3,000 people made their way to remote Red Lake on foot, by canoe or dog sled.

With the railhead about 200 miles from the gold camp, famed mine developer Jack Hammel brought in seven aircraft to bring in supplies to the Red Lake mining community – a huge advancement in logistics that was widely adopted by the exploration and mining sector.

The Red Lake Gold District is host to some of the richest gold deposits in the world and has produced some 30 million ounces of gold from high-grade zones, including about 18 million ounces from the Red Lake Mine and Campbell Mine operated by Newmont Goldcorp Corp. With such an illustrious history, the recent rise in the price of gold and outstanding mineral potential in the Red Lake camp, it is no wonder the area has been attracting a number of newcomers. 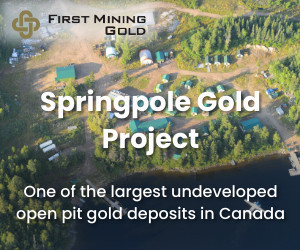 First Mining Gold Corp. [FF-TSX; FFMGF-OTCQX; FMG-FSE] is a Canadian gold developer focused on the development and permitting of the Springpole Gold Project in northwestern Ontario. The Project is 100%-owned by First Mining and is situated 110 km northeast of the Town of Red Lake and is one of the largest, undeveloped open pit gold deposits in Canada. A US$22.5 million funding agreement has been arranged with First Majestic Silver to further advance the project. In addition, the company also recently completed a C$28.75 million bought deal financing. 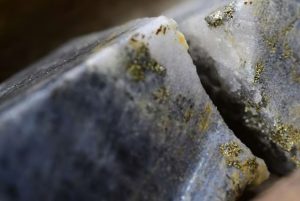 With 80% optionee AuTeco Metals, First Mining is also advancing the past-producing Pickle Crow Gold Project, also in northwestern Ontario, that has much infrastructure including a 200 tonne=per-day. Inferred resources are 1.2 million ounces at 4.10 g/t gold.

Another northwest Ontario project is the 100%-owned Cameron Gold Project located 80 km southeast of Kenora, with Measured and Indicated Resources of 464,000 ounces of gold at 2.61 g/t and 533,000 ounces of gold Inferred grading 2.54 g/t. 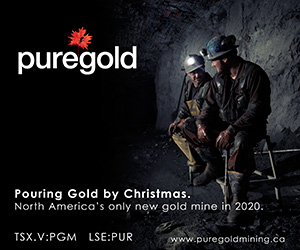 PureGold Mining Inc. [PGM-TSXV; PUR-London; LRTNF-OTC] is nearing the first gold pour at its 100%-owned PureGold Mine located in the heart of Red Lake, Ontario, Canada. An outstanding team of proven mine operators with a combined experience spanning 68 mines globally, PureGold will open the only new gold mine in North America to start producing in 2020.

There are two sweet spots in the evolution of a new gold producer, from discovery to production. The first is discovery itself. PureGold has defined a robust orebody within a +7-kilometre-long, high-grade gold system.

The company has three new high-grade discoveries, Wedge, Russet South, and Fork Zones, each wide open along strike and at depth. Importantly, the company has moved each of these zones quickly from discovery to delineation of a reportable mineral resource, providing an opportunity to define a scalable PureGold mine. 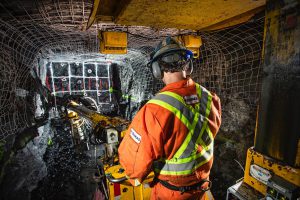 PureGold’s mineral system is deep rooted and gold deposits like this often continue for kilometers at depth. A single high-grade drill intercept anchors the PureGold Mine deposit at over 2 kilometres underground, almost a kilometre below the existing mineral reserves, highlighting the long-term potential for expansion far beyond the initial mine plan. The neighbouring Red Lake Mine, for example, is currently being mined at over twice the depth (2.5 km) of PureGold’s established reserves. PureGold has barely scratched the surface.

PureGold reserves include the 8 Zone, open to depth and along strike, with average grades of two to three times current reserves, providing the opportunity for explosive transformative growth.

On schedule to pour first gold before Christmas, PureGold is fully funded through to production, including an aggressive +30,000 metre ongoing exploration and expansion drilling program which is currently underway.

The Phase One mine plan will produce one million ounces of high-grade gold as part of a phased growth strategy. The high-grade nature of the deposit leads to a low unit cost, with an all-in sustaining cost (AISC) of $787/oz. Of course, this is taking place when gold is at all-time record highs, meaning the Phase One mine will deliver significant free cash flow, with margins of over US$1,150/oz or over C$1,500/oz at the time of writing.

Which brings us to the second sweet spot in the evolution of a new gold producer; sitting on the cusp of production, which is precisely where PureGold is today; just months from first gold pour and poised for the re-rate which typically accompanies the jump from developer to emerging producer.

The PureGold Mine will be the fifth highest grade gold mine in Canada and the seventeenth highest in the world. And yet PureGold is already thinking beyond their Phase One mine, recognizing an extraordinary opportunity for growth and expansion.