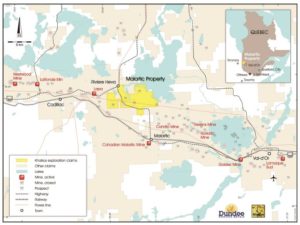 The property is located close to the prolific Cadillac fault, about 12 km north of the Canadian Malartic Mine (Agnico-Eagle Mines Ltd. [AEM-TSX, NYSE] and Yamana Gold Inc. [YRI-TSX; AUY-NYSE]), and 2 km east of Agnico’s Lapa Mine .

Under a May 2017 agreement, Dundee has the option to acquire a 71% interest in the Malartic gold property.

The drilling campaign will be led by Dundee. It will target a depth and along the Revillard-Malrobic trend for a total of approximately 5,000 metres with two rigs.

The new drilling phase will target at depth and along strike the extension and the down plunge of the intersections in these two holes.

“The results of the 2018 drill campaign confirmed the presence of a new gold economic occurrence in the prolific Malartic Twp.,” said Pershimex Resources President and CEO Robert Gagnon.

“The new drill campaign for approximately 5,000 metres is a significant step forward for the project,” he said. “The new phase reinforces our mission to be active in the most favourable areas of Abitibi for gold-bearing economic discoveries.”

Each whole warrant entitles the holder, subject to an adjustment in certain circumstances, to acquire one additional non-flow through common share at 10 cents each for a period of 12 months from closing of the private placement

Each unit, common share and warrant were subject to a mandatory holding period of four months and one day from closing of the private placement.