The mining industry in Peru, particularly gold and silver, has been historically important from the time of the Inca Empire, through the age of the Spanish Conquistadores, and into the modern age.

Its importance is underscored by the fact that during the first three five-year periods of this century, Peru has seen economic growth driven mainly by the price of metals. This development took place at a time after the structural reforms that guided the country towards liberalization and economic openness.

Peru is characterized by both small and large-scale mineral projects. Southern Copper’s $1.2 billion expansion of the Toquepala Mine and the construction of the $1.4 billion Tia Maria Mine are expected to make Peru the world’s leading copper producer.

Peru’s largest copper producers are the Antamina, Toquepala, Cerro Verde, Cuajone and Tintaya mines. The Antamina Mine in Ancash is operated by Peruvian company Antamina, a joint venture owned by BHP Billiton, Glencore, Teck and Mitsubishi. Southern Copper operates Toquepala and Cuajone in Tacna and Moquegua. Freeport operates Cerro Verde in Arequipa. The Tintaya Mine in Cusco is owned and operated by Glencore.

There are mid-tier mining companies active as well. Pan American Silver has several producing mines with a combined annual output of about 29.9 million ounces of silver. The company has silver reserves of 550 million ounces.

With hundreds of years of mining, is the country mined out? According to the Mineral Commodity Summary March 2020 published by the US Geological Survey, Peru has 10% of the world’s copper reserves, 4.2% of its gold, 21.4% of its silver, 7.6% of zinc, 7% of lead and 2.3% of tin reserves.

Those are known reserves; what about mineral prospects with geological evidence of more economic orebodies out there awaiting discovery? There are a number of active junior exploration companies that are of the view there are a great deal more economic discoveries to be made – both grass roots and exploring past-producing properties.

Companies such as Element 29 Resources with its Flor de Cobre and Elida are examples of a junior explorer targeting large copper deposits while Chakana Copper is active on its high-grade, gold-copper-silver Soledad Project in the prolific Ancash region.

Displaying confidence in Peru’s mineral endowment, the Ministry of Energy and Mines reported that between 1996 and 2019, investment in mining projects totaled US$71,430 million.

Looking at Peru’s prospectivity another way, the Flanders report stated that although Peru is endowed with large deposits of a variety of mineral resources, it is estimated that only 0.3% of the country’s total territory is being explored. Likewise, only a small percentage (1%) of Peru’s mineral reserves is being exploited.

According to the Ministry of Energy and Mines, the portfolio for 2020 consists of 64 projects with an investment amount of US$498.6 million. These projects are located in 16 regions with Arequipa experiencing the largest investment.

Clearly, the mineral potential of Peru is world-class with many opportunities for explorers and miners.

The Soledad Project consists of high-grade gold-copper-silver mineralization hosted in tourmaline breccia pipes. A total of 31,641 metres of drilling have been completed to date, testing eight of 23 confirmed breccia pipes with more than 92 total targets.

Currently, following encouraging channel sample results such as 9.98 g/t gold and 234.6 g/t silver over 17.0 metres, including 17.99 g/t gold and 624.0 g/t silver over 5.0 metres. Further drilling is underway. Drill results have been received from four additional holes completed at the Paloma East target at the expanded Soledad Project. These results are part of the Phase 3 drill program, a fully financed 15,000-metre exploration/definition program that started August 15. 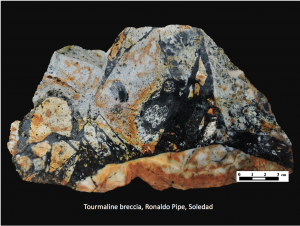 David Kelley, President and CEO, said: “These four scout drill holes provide additional support for an extensive mineralized breccia system at Paloma. The long runs of mineralized breccia starting near surface and extending to approximately 200 metres in depth is encouraging, particularly with indications of high-grade zones within the breccia. The shape of the breccia expands at depth, similar to what we have seen in several other breccia pipes.”

The Soledad Project is located in Peru’s premier mining province noted for a progressive, mining-friendly administration and only 35 km south of Barrick’s Pierina gold mine and 60 km west-southwest of the Antamina copper-zinc mine. Situated at a reasonable elevation of 3,800 to 4,600 metres ASL, the project has good infrastructure with grid electrical power and plentiful water. Local communities have a long-term involvement with mining.

Chakana management has many years’ experience in discovering economic mineral deposits and placing them into production. Besides strong institutional support, Gold Fields has a 17% interest in the company.

Peru is one of the world’s great mining jurisdictions: the second largest global copper and silver producer and the largest gold producer in Latin America. Indeed, mining represents 13% of Peruvian GDP and 60% of export revenue. The government has a favourable royalty system based on operating revenue. 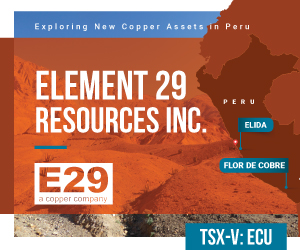 Newly-trading junior exploration company Element 29 Resources Inc. [ECU-TSXV] (“E29” or “Element 29”) is focused on advancing two large copper projects in Peru – Flor de Cobre and Elida. On the periodic table, copper is element 29, which is where E29 gets its name. The company was created in 2019 following a spin-out from GlobeTrotters Resource Group, a project generator company.

Element 29’s IPO totaled aggregate of 13,310,400 units at a price of $0.50 per Unit for gross proceeds of $6,655,200. Each Unit comprised one share in the capital and one-half of one warrant with each warrant exercisable into one share at an exercise price of $0.70 per warrant.

The 1,800-hectare, 100%-owned Flor de Cobre Project was a small-scale, underground past producer that is located in the top copper mining district in southern Peru between Freeport-McMoRan’s Cerro Verde copper-molybdenum mine and the Nexa Resources Chapi copper deposit.

There is a non-NI 43-101 compliant historical resource in the Candelaria Zone on the Flor de Cobre property from the 1990s totalling 57.4 million tonnes grading 0.67% copper. While the old historical resource does not use the modern resource definition standards and it is not clear if all the resources are on the current Flor de Cobre property configuration, they are still important as they suggest that there is significant porphyry mineralization in the area.

In 2021, E29 is planning an exploration program at Flor de Cobre that could lead to preparing a NI 43-101 compliant resource estimate. This work comprises 3,000 metres of drilling in the historical mining area. Metallurgical and engineering studies would also be carried out. 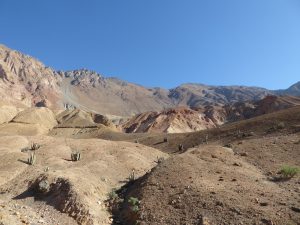 Between 2014 and 2018, 18 diamond drill holes totalling 9,880 metres were completed by Lundin Mining on Target 1 that returned 5 holes with at least 500 metre intersections up to 503 metres grading 0.42% copper, 0.046% Molybdenum and 3.23 grams per tonne silver including 265 metres of 0.52% copper. 0.049% Molybdenum and 4.1 grams per tonne silver in hole ELID012. Still conceptual in nature, there is insufficient drilling data to calculate a mineral resource. However, the 18 holes drilled to date plus surface mapping provide encouragement for developing the Elida Central/Area 1 Zone target that could potentially host 200 to 500 million tonnes grading 0.35%-0.45% copper, 0.03-0.05% molybdenum and 3.5 g/t-4.5 g/t silver. There are four untested targets remaining on large porphyry centres.

In 2021, E29 is planning a 3,000 metre exploration program at Elida that could lead to preparing a resource estimate. Metallurgical studies are also planned.

Headed by Brian Booth, P.Geo, President, CEO and Director, the management team at Element 29 has extensive exploration, mine development and capital markets experience.

Located in mining-friendly Peru, both the high quality Flor de Cobre and Elida copper projects have already started on the path to expand resources towards a NI 43-101 resource. Following the IPO in December 2020, Element 29 Resources has 66.7 million shares outstanding.