Most people are aware that platinum group metals (PGMs) are used in the catalytic converters of internal combustion engines – both gasoline and diesel – to curb greenhouse gas emissions. They do this by converting harmful gases emitted from engines to relatively harmless ones by both the reduction of nitrogen oxides (NOx) into nitrogen N2Â and the oxidation of hydrocarbons and CO to CO2.

However, many may not know about the myriad uses of PGMs. Besides coins, bars and jewellery, PGMs are used in fuel cells, hydrogen production, fertilizer production, medical implants such as hearing assist devices, cardiac rhythm management, pacemakers, stents, hip and knee implants, cancer treatments, fiberglass, to name a few.

Most platinum deposits are either co-products or by-products of mining other metals such as nickel or copper. Sometimes all the platinum group metals appear together that include platinum, palladium, rhodium, iridium, ruthenium and osmium. In other deposits only one or two PGMs occur together. Platinum is 30 times more rare than gold.

Palladium is also an important metal with over 80% of palladium used in catalytic converters. It is also used in electronics, dentistry, and jewellery to a minor extent.

RhodiumÂ isÂ utilizedÂ to make electrical contacts, as jewelry and in catalytic converters, but is most oftenÂ usedÂ as an alloying agent in other metals, such as platinum and palladium. These alloys areÂ usedÂ to make electrodes for aircraft spark plugs and laboratory crucibles.

Platinum continues its use in catalytic converters. Platinum jewellery is experiencing a comeback in popularity in China with demand expected to grow by 13% in 2021, according to the World Platinum Investment Council (WPIC). In November 2020, China held its “Singles’ Day” event that saw record-breaking sales of US$74 billion, almost double that of 2019. This was partially triggered by pent-up demand caused by the COVID-19 pandemic restrictions on gatherings. China is expected to account for 45% of total platinum jewellery demand in 2021.

The Q3 2020 report by WPIC stated that “Platinum supply and demand both recovered significantly in the third quarter of 2020 when compared to the second quarter, but overall still weak supply and strong investment demand are behind the large deficits in quarter three and for the full 2020 year of over -700,000 oz and over -1.2 million oz respectively. The forecast deficit in 2021 will be over -220,000 oz.”

However, according to the WPIC, weakness in these demand segments is expected to be partially offset by continued strong investment demand, with investment volumes expected to be up 32% (+406,000 oz) to a record high of 1,659,000 oz. Heightened global risk is expected to continue to drive investor demand for hard assets, with 2020 bar and coin demand forecast to grow by 123% to 629,000 oz.

The investment case for platinum has become more compelling as 2020 has progressed, according to the WPIC, supporting strong gains in platinum investment, in particular growth in ETF holdings of over 600,000 oz since platinum’s March and April price lows and bar and coin demand of 523,000 oz in the first three quarters. Mine production is expected to return to close to full capacity in 2021.

Trevor Raymond, director of research for the WPIC said that he expects it is only a matter of time before platinum prices react to the tightening supply. Meanwhile, some analysts consider platinum to be undervalued.

During the past year, rhodium steadily gained in price from US$2,000/oz to US$19,900.00/oz on February 4, 2021. Interruptions to Russian supply since early 1997 along with automakers’ use of rhodium in catalytic converters have strengthened theÂ rhodiumÂ price. Indeed, the price of rhodium has risen by 3,000% in the last five years.

Gungnir Resources Inc. [GUG-TSXV; ASWRF-OTCPK] has several mineral projects in mine-friendly Sweden, including the Lappvattnet and nearby Rormyrberget Projects where recent sampling of the nickel-copper-cobalt-rich drill core returned 50.91 g/t platinum-palladium-gold (39.0 g/t platinum, 11.8 g/t palladium, 0.11 g/t gold) and 2.13% nickelÂ over 0.45 metres at Lappvattnet. Resampling also returned high-grade nickel values, including 4.64% nickel over 0.65 metres at its Lappvattnet property. Results from the Rormyrberget nickel deposit include 2.33% nickel over 12.50 metres, including 3.00% nickel over 5.10 metres.

Less than 100 km to the west, the company is advancing the newly expanded, 48.9 km2 Knaften Project that was originally staked for its gold potential. The project has been upgraded with two base metal target discoveries in 2017 and 2018. The Rodingtrask VMS Zn-Cu and a separate Cu-Ni target add significant exploration up-side to the previously gold-only Knaften Project (Knaften 300 Gold Zone). 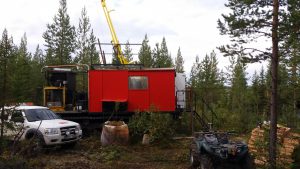 The property is located at the south end of a highly under-explored and prospective area in the Vasterbotten District of northern Sweden covering up-ice of one of the largest gold-in-till anomalies in Sweden. Other gold-in-till anomalies in the region cover either current and past-producing gold mines or known gold resources, including Agnico Eagle’s Barsele gold deposit (>2 million ounces of gold) and the Boliden/Bjorkdal gold deposit area with more than 5 million ounces of gold produced. 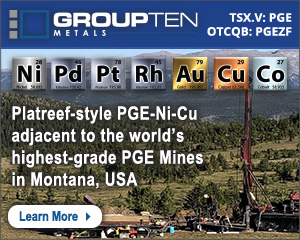 Group Ten Metals Inc. [PGE-TSXV; PGEZF-OTCQB; 5D32-FSE] has received significant additional investor interest following continued strength in the price of rhodium, rising to its late January close over US$19,000 an ounce from March lows near $5500. That’s because rhodium is in the suite of out-performing precious and battery metals at the Stillwater West and East PGE-Ni-Cu-Co + Au projects that Group Ten is advancing in Montana, USA.

Not surprisingly, Group Ten Metals shares advanced on January 14, 2020, amid reports that auto makers are scrambling for limited supplies of rhodium in a bid to meet tightening emissions regulations. Rhodium is a rare Platinum Group Element (PGE) that is used in internal combustion engine catalytic converters to neutralize harmful nitrous oxides.

Group Ten’s exposure to other recent movers such as platinum, nickel, and copper has also brought heightened investor interest, along with palladium, which, like rhodium, has seen elevated prices for some time due to persistent multi-year supply deficits. 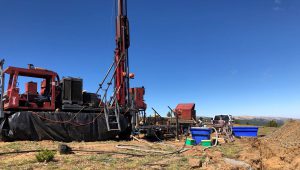 Stillwater West (and nearby Stillwater East) are situated in Montana’s Stillwater Igneous Complex, which is recognized as one of the top regions in the world for platinum group elements, nickel, and copper mineralization, alongside the Bushveld Igneous Complex in South Africa, which is a similar layered magmatic intrusions.

The Stillwater district is renowned for the J-M Reef deposit – the highest-grade PGE deposit in the world, and the largest outside Africa and Russia – which hosts three mines and a smelter-refinery complex owned by Sibanye-Stillwater. The mines have produced over 14 million ounces of palladium and platinum to date, along with other commodities including nickel and copper. Group Ten shares the Stillwater complex with Sibanye, adjoining their operations along more than 25 km of strike with 100% ownership of claims covering more than 61 km2.

The J-M Reef deposit was discovered in the 1970s based on known parallels between the Stillwater and Bushveld complexes. It is in the same stratigraphic location as the Merensky Reef is in the similarly layered Bushveld complex. South Africa continued to lead the way in the 1990s, developing Anglo American’s giant Mogalakwena mine in the lower layers of the Bushveld complex in a district known as the Platreef. Today, with additions by Ivanhoe’s Platreef Mine and Platinum Group Metal’s Waterberg Project, the Platreef is among the most desirable districts in mining, hosting more than 400 Moz of PGEs and gold, plus 10s of billions of pounds of nickel and copper, in large sulphide deposits that are amendable to bulk mining methods. The Platreef deposit model offers an attractive blend of commodities with significant values of both battery and precious metals that is globally very rare.

Group Ten is continuing the application of Bushveld geological models to the Stillwater district, focusing its exploration efforts on the “Platreef-in-Montana” potential of the lower portion of the magmatic layers at Stillwater. It is the first company to systematically consolidate both the land position and an extensive database, which now includes more than 31,000 metres of drill data, along with valuable geophysical and geochemical surveys, and other work.

Group Ten distilled the database to arrive at 14 multi-kilometre-scale target areas: eight target Platreef-style deposits, and six target the more conventional reef-style mineralization that the district is known for. Drilling in 2019 confirmed the presence of significant Platreef-style mineralization and, together with the 2020 drill campaign and past drill data, is expected to drive the delivery of maiden NI 43-101 compliant resources at the three most advanced target areas – Discovery, Camp, and HGR – in the first half of the year.

“At each of the targets, we see long intervals with tens to hundreds of metres of copper and sulphide mineralization enriched with palladium, platinum, rhodium, gold and cobalt,” said Group Ten President and CEO Michael Rowley. “Our vision is to become a primary US-based source of battery and precious metals. We are located in a premier US mining district, in some of the very best rocks in the world for our target commodities, at a time when the US government has listed five of our commodities as critical with a view to securing domestic supplies.”

Group Ten is fully permitted and well-funded. And, it has two other 100%-owned, district-scale assets that it is looking to monetize, including the high-grade Black Lake-Drayton gold project adjacent to Treasury Metals’ development-stage Goliath-Goldlund Project in northwest Ontario, and the Kluane PGE-nickel-copper-cobalt project which lies on trend with Nickel Creek Platinum’s Wellgreen deposit in the Canadian Yukon.