Even if the climate crisis is currently sharing headline space with the global pandemic, it has by no means lost its traction. Nor have the perils of climate change lost any of their urgency.

Taking a global stance, I would say that the charge to lower carbon emissions is entering into a phase more characterized by action than by jargon.

Looking at the energy, utility and resources sector, there is definite evidence of a net forward movement—more noticeable among the agile movers and shakers, but also among slower-moving monoliths. Coupled with this, I’m seeing rapid developments in data-driven transparency, auditability, and collaboration, creating new opportunities to win and delight customers and service users, seize market share, and operate more efficiently (both in terms of business processes and environmental impact).

Against a market backdrop that might be the most volatile in modern history, I have summarized my thoughts about what is in store for the sector:

Joint-ventures and startups fuel renewable growth: but will Big Oil clean up?

While 2020 has been a bleak year in many regards, there is cause for optimism when looking at the continued growth of renewable, green energy such as solar photovoltaic (PV), wind, hydropower, among others.

The IEA’s recently published Renewables 2020 Report notes that Covid-19 failed to slow the development of renewable energy. In fact, in terms of new capacity-boosting investments, renewables will continue to be the fastest-growing energy source through 2025.

I predict that the growth of renewables will be fueled by multi-disciplinary joint ventures and partnerships across the industry. In 2021 and beyond, we will see a growing number of major energy and utility companies team up with agile businesses, running the gamut from established enterprises to smaller startups, in an effort to reach both emission targets and create new, long-term revenue.

We are seeing ample proof of this process gaining momentum, particularly across the United States:

McDonalds USA and Apex Clean Energy recently announced two power purchase agreements for two major wind farms and a large portfolio of solar projects across three U.S. states. The projects strive to reduce McDonalds’ absolute emissions from its restaurants and offices by 36% by 2030, against a 2015 baseline. Beyond the climate benefit of the new agreements, the three new projects will collectively create 3,400 short-term jobs and 135 long-term roles.

In a bid to reduce fossil-fuel reliance while paving the way for more renewables in the energy mix, Pacific Gas and Electric Company (PG&E) and Tesla have broken ground on a 182.5 MW lithium-ion battery energy storage system in California. The Tesla Megapack project will also boost grid efficiency and reliability, resulting in reduced overall costs for consumers.

As part of its goal to become a regenerative company, Walmart has joined forces with Schneider Electric to provide increased access to renewable energy for the retailer’s U.S.-based suppliers. The Gigaton PPA (GPPA) Program seeks to educate Walmart suppliers on renewable-energy purchases and encourage renewable-energy adoption by participating suppliers through aggregate power purchase agreements (PPA). This latest program is part of Walmart’s goal to be powered 50% by renewable energy by 2025 and 100% by 2040; it now powers an estimated 29% of its operations this way.

“Behind-the-Meter” Generation Turns the Industry on its Head

The corollary of the above-mentioned trend towards renewables is the proliferation of DERs (distributed energy resources). Industry as well as private households are increasingly looking to things like solar panels and geothermal systems to supplement their primary energy supply, over time more or less bypassing the traditional energy companies.

The consequence of this development is that power generation and distribution companies lose a steady and hitherto locked-in source of revenue as well as a national or regional grid not designed to accommodate decentralized, renewable energy production.

Whereas this disruption is certainly most unwelcome in some quarters, there is enormous opportunities for forward-thinking utilities to capture new revenue streams.

Given this trend, I predict more utilities will start selling and servicing DERs like solar panels directly to end consumers. These products are generally sourced from and serviced by specialized companies, but energy and utilities players are uniquely positioned to leverage their economies of scale and an established and far-reaching service workforce, to offer more choice, better payment plans to cover up-front costs, and timelier service. Besides reducing their energy bill (or actually making money by selling surplus energy back to the grid), consumers would also benefit from lower maintenance costs and the peace of mind of knowing they are doing business with a regulated and certified company.

As major utilities move deeper into the DER realm, the pressure is on to deliver service experiences on an entirely new level—efficiently and at scale. Suddenly faced with hundreds of thousands of new, small-scale assets to monitor and service, energy companies will need to make a focused effort to implement smart and predictive technologies such as artificial intelligence (AI), machine learning (ML), and digital twins to turn the flood of data into intelligible insights. In fact, IDC predicts that by 2025, over 50% of utilities will increase spend in automating operations with an emphasis on edge, AI and ML technologies, thus doubling the penetration of predictive and prescriptive maintenance.

So one of the major challenges facing market entrants is to find and deploy enterprise software that can operationalize unstructured data and turn it into great customer service.

Shipping and cargo represent another area where operationalizing data can be turned into great customer service.

For global logistics, 2020 has been a disruptive year. Nowhere is this more keenly felt than in air cargo, which, according to a report presented by Accenture, saw a 20% decline in global capacity during the period October 12–25, 2020 compared to the same period in 2019.

Based on this global trend, I predict that in 2021, we will start to see a flurry of activity in the maritime sector in a bid to capture market share from its airborne cousin. Thanks to the inherent ability of ships to accommodate larger batteries and zero-emission propulsion systems (a feat airplane manufacturers are hard-pressed to counter), the sea cargo ecosystem will position themselves as the “greener” and more sustainable option.

This development will result in an arms race of sorts among shipping ports to offer the most streamlined, cost-efficient, and intelligent services to their customers and their customers’

customers. This new dynamic will drive the proliferation of technology such as AI, ML, and digital twins as a way of delivering supply-chain transparency, traceability, accountability and, most importantly, a better-quality service experience.

For those ports and stakeholders that are equipped for this change, there is ample opportunity for revenue and market-share growth. Success, however, will require agile business processes governed by a technological infrastructure that is modern, service-centric, and fit-for-purpose.

I don’t think anyone will be sorry to see 2020 disappear into the annals of history. But for all its bluster and disruption, I believe I discern a renewed sense of purpose and determination among the players in the energy, utilities and resources sector. Speaking with customers, partners, analysts, and other stakeholders, I see a genuine and broadly held desire to start delivering on the promises made over the past few years. The reason why I am convinced that the next five to 10 years will be a period of unparalleled progressed is because it will not only be driven by companies, but by people. 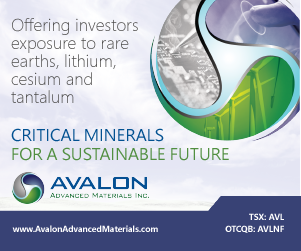 While Toronto-based Avalon has four advanced stage projects covering a variety of critical metals and minerals, it is currently focusing on its 100%-owned Separation Rapids Lithium Project 70 km north of Kenora, northwestern Ontario. Separation Rapids is near road, rail and power infrastructure. Avalon has an MOU with a nearby First Nation community with a view toward maximizing local Indigenous economic development opportunities.

The project hosts a lithium-cesium-tantalum pegmatite deposit unusual in its enrichment in the rare high-purity lithium mineral petalite. As such, its lithium derivatives will be suitable for use in the $100 billion global glass industry as well as the lithium-ion battery market for electric vehicles.

A Preliminary Economic Assessment was updated in 2018 that demonstrated the project would have a small environmental footprint, low GHG emissions and almost non-existent air emissions. Waste rock is non-toxic and non-acid-generating with minimal water discharge. 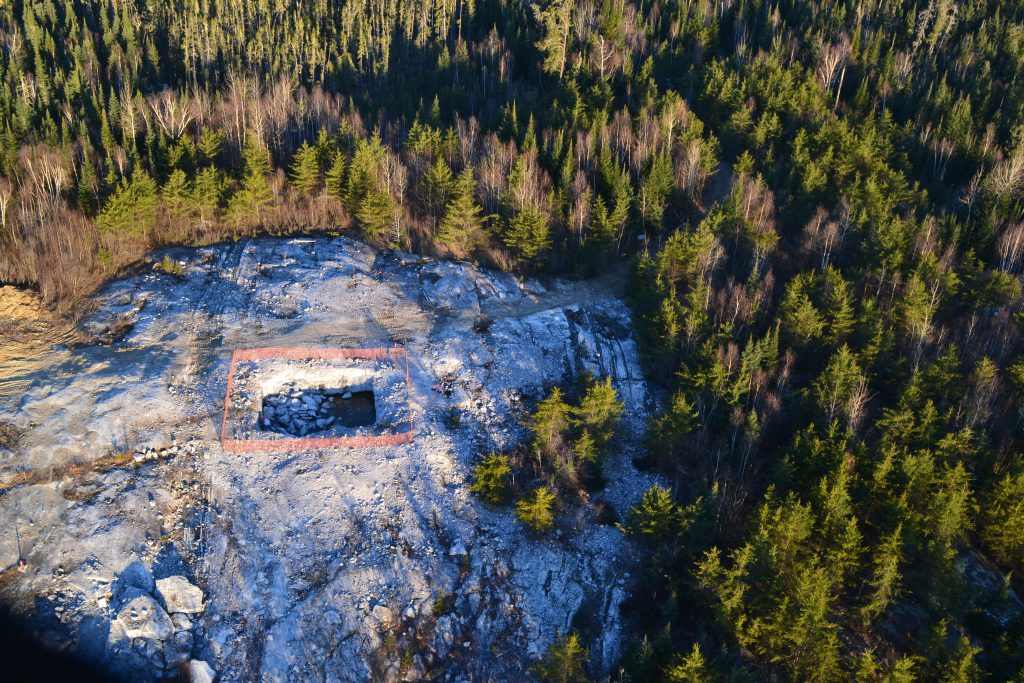 Avalon is now planning for the extraction and processing of a 5,000-tonne bulk sample in order to produce lithium product samples, finalize the process flowsheet and plant design, secure off-take agreements and arrange project financing.

A preliminary resource was estimated in 2001 to contain roughly 340,000 tonnes grading 2.294% Cs2O and 0.037% Ta2O5 based on nine holes drilled to a maximum vertical depth of 250 metres. The resource is open to depth and along strike for. Other similar pollucite-bearing pegmatite dykes on the property remain untested.

Economic resources of the cesium ore mineral pollucite are rare and Lilypad represents one of the few known occurrences with significant size potential in the world. The world has limited cesium production and new producers are needed for the growing number of high technology applications.

For 2021, the company plans to follow-up on field work with geological and geochemical surveys followed by diamond drilling to define additional cesium-tantalum resources. In addition, plans include process testwork on the 250-kg bulk sample collected in October 2020, sampling of historic drill core for grade confirmation and block modelling of the resource delineated in the 2001 drilling program on the Pollucite Dyke to prepare an updated NI 43-101 resource estimate.

The company is also expecting the results of an Environmental, Social and Corporate Governance Risk Rating License from Sustainalytics, a MorningStar company, by late February 2021. Sustainalytics’ ESG Risk Ratings provide investors with third-party validation of the company’s sustainability performance, along with insights into why certain ESG issues are considered material for a company and how well a company is managing those risks. The benefits of obtaining an ESG Risk Rating include the ability to provide better access to ESG investment capital, and the ability to gain commercial benefit from the rating externally with creditors, suppliers, customers and other stakeholders.

Investors can benefit from both resource expansion and development as well as the company’s efforts to develop sustainably-produced critical minerals supply chains at a time when these commodities are seeing a significant increase in demand.