RJK Explorations Ltd. (â€˜RJKâ€™ or â€˜the Companyâ€™) (TSXV: RJX.A, US OTC: RJKAF) is pleased to announce that the Company has discovered two new kimberlites in its ongoing drilling program and extended the length of the Paradis Pond kimberlite to approximately 1.2 kmâ€™s.

The Robinâ€™s Place conductance anomaly was tested with two vertical drill holes. RP-20-1 intersected 33.6 meters of kimberlite before being lost due to difficult drilling conditions. Drill hole RP-20-2 was collared 180 meters to the southeast and intersected 15.2 meters of kimberlite. RP-20-1 is the thickest intersection of kimberlite drilled to date, which may represent a feeder zone originating from the Cross Lake Fault structure. This anomaly is approximately 450 meters in length and 300 meters in width representing a perimeter area of 10 hectares.

The Gleeson conductance anomaly was tested in two vertical drill holes aligned along a West to East fence and collared 600 meters apart within a larger conductance anomaly measuring approximately 1,400 meters in length by 600 meters in width representing a perimeter area of 40 hectares. Hole GL-20-1 and hole GL-20-2 intersected 4 meters and 9.8 meters of kimberlite under shallow overburden depths of 3 meters and 4.5 meters respectively.

Drilling of the Paradis Pond kimberlite now shows that that body extends for some 1.2 kilometers in length and a minimum of 400 meters wide with an average thickness of 11 meters. Approximately 55% of this conductance anomaly has been tested by widely spaced drill holes within a perimeter area of 87 hectares measuring approximately 2,000 m in length and by widths varying from 400 meters to 600 meters.

Additional in-fill drilling is required to further define the boundaries of each of the conductance anomalies.

In the vicinity of Paradis Pond, only three holes have not intersected kimberlite while testing geophysical anomalies outside of the EM conductance anomalies. All three kimberlite bodies discovered to date visually appear to have similar phase lithologies and deposited in similar geologic settings. Other untested conductance signatures are located within the companyâ€™s land holdings. 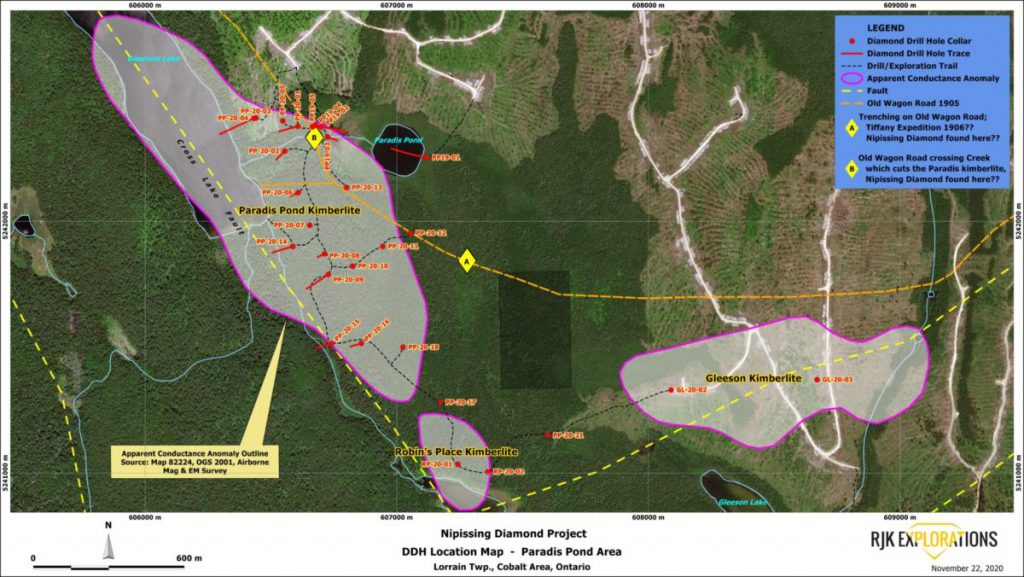 The 160kg sample (news release September 29,2020) has been processed byÂ Charles E Fipkeâ€™s CFM Lab in Kelowna BC and resultsÂ are expected shortly.

Mr. Peter Hubacheck, P. Geo., Project Manager for RJK and the Qualified Person as defined by National Instrument 43-101 has approved the technical disclosure in this release.