The database on which the updated 2021 MRE is based includes data from 378 surface and underground drill holes totalling approximately 68,693 m of diamond drill core. The MRE also includes analytical results from 223 underground chip samples. Surface trench results have been used to constrain the Main Zone outcrop. Both drill hole and underground chip sample data have been composited over 1.0 m intervals. These data have been reviewed and validated, and the MRE estimated by P&E Mining Consultants Inc. The effective date of this MRE is November 15, 2021. A Technical Report will be filed on the Companyâ€™s website and SEDAR within 45 days of this disclosure.

John Mirko, President & CEO of Rokmaster stated, â€œOur updated Mineral Resource Estimate is another milestone in establishing a potential commercial mining operation at Revel Ridge. Rokmaster has added significant gold ounces in every classification, and the system remains open. Rokmasterâ€™s diamond drilling and comprehensive geological and geochemical surveys have developed a promising series of targets well outside of the current Mineral Resource boundaries.

In addition, our understanding of the controls on thicker and higher-grade mineralized zones has progressed significantly. Changes in that knowledge base will guide surface and underground drill programs in the 2022 exploration season, potentially leading to further expansion of Â our MRE.â€

Michael Cowin, Chairman & Director of Rokmaster, added, â€œOver the last 18 months Rokmaster has completed 27,255 metres of core drilling in 79 surface and underground drill holes at Revel Ridge. That effort has resulted in the significant organic growth of the mineral deposit, exemplified by the revised AuEq values documented in the Measured, Indicated, and Inferred 2021 Mineral Resource Estimate.

Weâ€™re seeing that we can expand the Revel Ridge Mineral Resource by increasing the number of drill holes which test it. In the upcoming months, we intend to further develop our innovative surface and underground exploration programs to strategically expand the Mineral Resource.â€

Additional unreleased drill results are provided in Table 2, and the collar locations of these drill holes, are illustrated in Figure 1. The changes in the shape of mineralized zones are illustrated by the Net Smelter Return constrained domains, using all drill holes up to 2012, is documented on Figure 2, which is contrasted by Figure 3, a longitudinal projection of 2021 Mineral Resource classification boundaries. 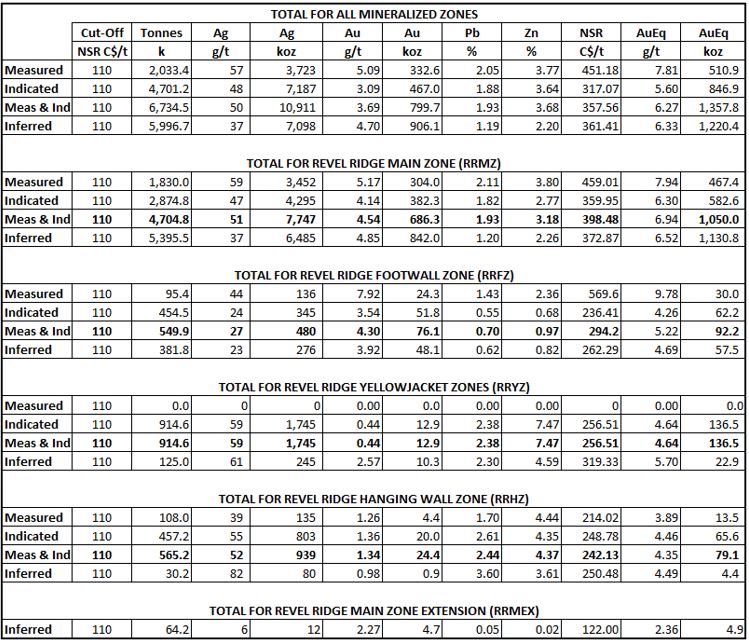 Characteristics of the relevant mineralized domains include:

Revel Ridge Main Zone Extension). The RRMEX is the northwestern strike continuation of RRMZ and applies to any intersection northwest of DDH RR21-54. The zone is known to extend for at least 1,800 m northwest of the 830 m portal. In the Inferred classification, RRMEX contains 5 thousand ounces AuEq in 64 thousand tonnes grading 2.36 g/t AuEq. The modest size and grade of the initial RRMEX Mineral Resource is a function of two relevant parameters:

Quality Assurance/Quality Control. Dr. Jim Oliver, P. Geo. supervised all aspects of the drilling and sampling undertaken in the 2021 underground and surface diamond drill program. All samples have been collected from Â½ NQ core, sawn with a diamond saw with the sample intervals marked by technical personnel. A full QAQC program using blanks, standards and duplicates was utilized to monitor analytical accuracy and precision. QAQC samples are submitted approximately at every 20th sample, or a minimum of 5% of the total sample stream is be represented by QAQC samples. Two standards are used and are designed to provide information on (a.) higher grade characteristics of mineralized intervals and (b.) on mid-grade samples. A limestone blank is inserted after any sample which has macroscale characteristics of higher-grade mineralization. Duplicate samples are repeat analysis of pulp samples from the designated primary sample. The samples were sealed on site and shipped to MSA Labs in Langley, British Columbia. MSA is an ISO 17025 (Testing and Calibration Laboratory) and an ISO 9001 (Quality Management System) Certified Laboratory. Drill core samples were crushed to 2 mm and a 500-gram sub sample was pulverized with 85% of the sample passing 75 microns. The sub-sample was analysed using a combination of MSA Labs FAS211 for Au and ICPâ€“240 (4 acid digestion) for silver, base metals and other trace elements. FAS211 for gold is an ore grade fire assay of a 50 g pulp with an AAS finish with a detection range between 0.01 and 100 ppm). ICP-240 utilizes four acid digestion and provides ore grade analytical data on silver, base metals and 26 other elements.

The technical information in this news release has been prepared in accordance with Canadian regulatory requirements as set out in National Instrument 43-101 and reviewed and approved by Eric Titley P.Geo., who is independent of Rokmaster and who acts as Rokmasterâ€™s Qualified Person. Rokmasterâ€™s 2021 MRE, documented in this news release, has been reviewed and approved by Fred Brown (P.Geo.) and Eugene Puritch (P.Eng., FEC, CET) of P&E Mining Consultants, Inc. both who are independent of Rokmaster.

On Behalf of the Board of Directors of

Rokmaster controls a portfolio of three significant exploration and development projects all of which are in southern British Columbia in regions of excellent infrastructure. The three projects include:

Footnote (2). The qualified person has been unable to verify this inferred resource.

CAUTIONARY NOTE REGARDING FORWARD LOOKING STATEMENTS: This news release may contain forward-looking information within the meaning of applicable securities laws (â€œforward-looking statementsâ€). Forward-looking statements are statements that are not historical facts and are generally, but not always, identified by the words â€œexpects,â€ â€œplans,â€ â€œanticipates,â€ â€œbelieves,â€ â€œintends,â€ â€œestimates,â€ â€˜projects,â€ â€œpotentialâ€ and similar expressions, or that events or conditions â€œwill,â€ â€œwould,â€ â€œmay,â€ â€œcouldâ€ or â€œshouldâ€ occur. These forward-looking statements are subject to a variety of risks and uncertainties which could cause actual events or results to differ materially from those reflected in the forward-looking statements, including, without limitation: risks related to fluctuations in metal prices; uncertainties related to raising sufficient financing to fund the planned work in a timely manner and on acceptable terms; changes in planned work resulting from weather, logistical, technical or other factors; the possibility that results of work will not fulfill expectations and realize the perceived potential of the Companyâ€™s properties; risk of accidents, equipment breakdowns and labour disputes or other unanticipated difficulties or interruptions; the possibility of cost overruns or unanticipated expenses in the work program; the risk of environmental contamination or damage resulting from Rokmasterâ€™s operations and other risks and uncertainties. Any forward-looking statement speaks only as of the date it is made and, except as may be required by applicable securities laws, the Company disclaims any intent or obligation to update any forward-looking statement, whether as a result of new information, future events or results or otherwise.