American Creek Resources Ltd. (TSXV: AMK) (“the Corporation”) is pleased to present the most recent drill results from the 30,108 meter, 2021 resource expansion and definition drilling program for the Goldstorm Deposit at their flagship property, Treaty Creek (the â€œProjectâ€), located within the Golden Triangle of Northwest British Columbia.

Included in this press release are the results of seven diamond drill holes that were completed at the Goldstorm Deposit along three section lines spaced 300 meters apart (Sections: 111+00 NE, 114+00 NE and 117+00 NE). These holes confirm that gold and copper mineralization gain strength in the northern-most set of drill holes, which demonstrates that the Goldstorm System remains very robust and open to expansion to the north. The Copper Belle-Goldstorm Deposit (CB-GS) currently hosts an estimated Measured and Indicated Mineral Resource of 19.4 million ounces of AuEq grading 0.74 g/t AuEq and an Inferred Resource of 7.9 million ounces of AuEq grading 0.79 g/t AuEq (see Tudor Gold press release dated March 9, 2021).

Tudor Goldâ€™s Vice President of Exploration and Project Development, Ken Konkin, P.Geo., states: â€œWe are very pleased to report these exceptional drilling results that continue to increase the dimensions of the Goldstorm Deposit, with some of the most impressive gold-copper mineralization observed to-date. We have significantly expanded the deposit to the north, northwest and at depth. Drill hole GS-21-113-W2 is the deepest intercept in the Goldstorm system. This hole ended in very strong gold-copper and associated silver mineralization within the CS600 domain. Clearly, much more drilling is required to constrain the deposit which appears to have the greatest potential for continued expansion to the northeast and northwest.

This system has proven to be much larger than we previously expected and, combined with our recent discoveries at Perfect Storm, Eureka and Calm Before the Storm, gives this Project un-paralleled economic potential as one of the largest gold projects in the world. We have recently received the final analytical results for our last drill holes and our geologists are working on refining the geological interpretation and completing maps and drill sections. We expect more news releases to follow shortly.â€

The complete list of these reported composited drilling results for Goldstorm, as well as the drill hole data, including hole location, elevation, depth, dip and azimuth, are provided in Table 1 and Table 2, respectively. Please click on the following link to view: Plan Map and Cross Sections for the drilling results reported in this news release.

Please click on the following link to view:Â Plan Map and Cross Sections for the drilling and surface samples reported in this news release. 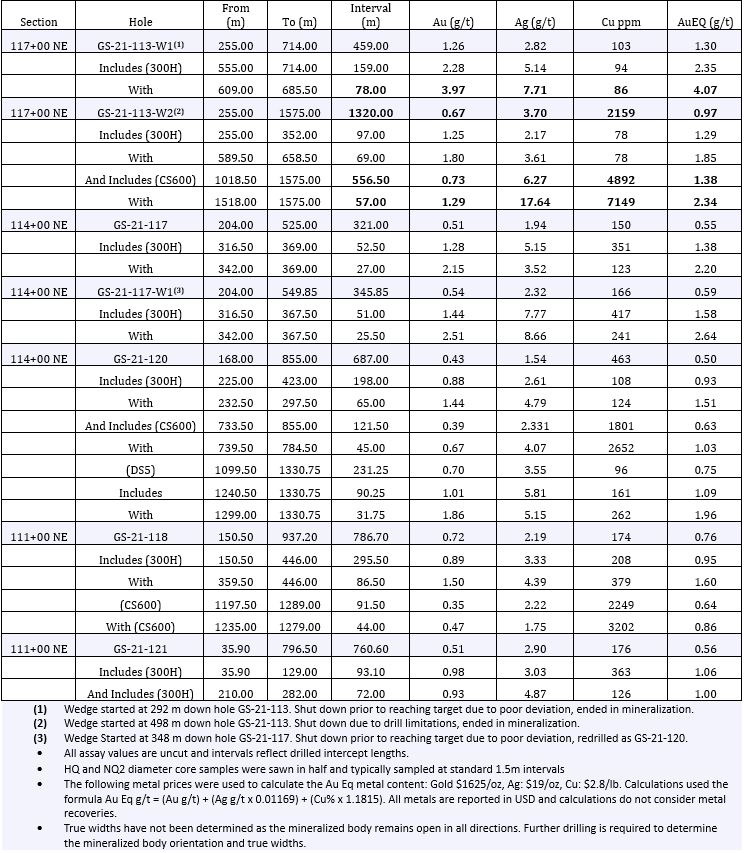 Darren Blaney, CEO of American Creek, commented: Â “The Goldstorm deposit has had so many world-class intervals, yet they continue to get better and better.Â  The scale and consistency of the deposit is simply amazing, and its magnitude is increasing in several ways.Â  Firstly, the gold enriched 300 zone (first 300m from surface) continues to expand to the east and north, strengthening the potential for open-pit operations.Â  Secondly, the system continues at depth, well below one kilometer in numerous holes ending in mineralization.Â  Finally, the overall volume of Goldstorm continues to increase as well.Â  We look forward to finding out how much the volume has increased in the revised resource calculation by our partner Tudor Gold.

Just over a month ago, mining legend Pierre Lassonde stated “the best deposit you can find in the entire world will be a copper/gold deposit with a 50-year life.Â  That is going to be simply a mintâ€¦to just mint money!”Â  While 90% of the gold-equivalent value comes from gold, the Goldstorm is so massive that the remaining 10% of the value comes from 1.426 billion pounds of copper and 133.98 million ounces of silver.Â  The holes in this release show that we may just be hitting the edge of much richer copper and silver at depth.Â  The Goldstorm has the potential to be one of the types of deposits that Mr. Lassonde was talking about.Â  The Perfectstorm, Eureka, and Calm Before the Storm have similar potential but require more work.

Please click the following link to view: An interview with American Creek discussing the results of this press release and more.

The Qualified Person for Tudor’s news release for the purposes of National Instrument 43-101 is Tudor’s Vice President of Project Development, Ken Konkin, P.Geo. He has read and approved the scientific and technical information that forms the basis for their disclosure contained in their news release.

The Qualified Person for this news release is James A. McCrea, P. Geo., for the purposes of National Instrument 43-101. While American Creek has not independently confirmed Tudor’s information, Mr. McCrea has read and approved the scientific and technical information that forms the basis for the disclosure contained in this news release.

Drill core samples were prepared at MSA Labs’ Preparation Laboratory in Terrace, BC and assayed at MSA Labs’ Geochemical Laboratory in Langley, BC. Analytical accuracy and precision are monitored by the submission of blanks, certified standards and duplicate samples inserted at regular intervals into the sample stream by Tudor Gold personnel. MSA Laboratories quality system complies with the requirements for the International Standards ISO 17025 and ISO 9001. MSA Labs is independent of the Company.

The Corporation has an interest in the Treaty Creek property, a joint venture project with Tudor Gold/Walter Storm located in BC’s prolific “Golden Triangle”.

This news release contains “forward-looking information” within the meaning of applicable Canadian securities legislation. â€œForward-looking informationâ€ includes, but is not limited to, statements with respect to the activities, events or developments that the Corporation expects or anticipates will or may occur in the future, including the completion and anticipated results of planned exploration activities. Generally, but not always, forward-looking information and statements can be identified by the use of words such as â€œplansâ€, â€œexpectsâ€, â€œis expectedâ€, â€œbudgetâ€, â€œscheduledâ€, â€œestimatesâ€, â€œforecastsâ€, â€œintendsâ€, â€œanticipatesâ€, or â€œbelievesâ€ or the negative connotation thereof or variations of such words and phrases or state that certain actions, events or results â€œmayâ€, â€œcouldâ€, â€œwouldâ€, â€œmightâ€ or â€œwill be takenâ€, â€œoccurâ€ or â€œbe achievedâ€ or the negative connation thereof.

There can be no assurance that such statements will prove to be accurate and actual results and future events could differ materially from those anticipated in such statements. Important factors that could cause actual results to differ materially from the Corporation’s plans or expectations include risks relating to the actual results of current exploration activities, fluctuating gold prices, possibility of equipment breakdowns and delays, exploration cost overruns, availability of capital and financing, general economic, market or business conditions, regulatory changes, timeliness of government or regulatory approvals and other risks detailed herein and from time to time in the filings made by the Corporation with securities regulators.