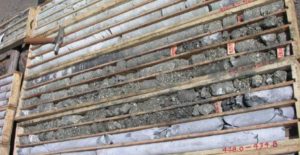 Sun Metals Corp. [SUNM-TSXV], at the request of the Investment Industry Regulatory Organization of Canada (IIROC), on Friday October 26 retracted and corrected certain statements that were made in the company’s news released on October 25, 2018.

As true widths of the drill hole intersections are not known, disclosure of grade times (x) intersected length will overstate this calculation and this calculation may be material, said Sun Metals, which has provided a corrected table in Friday’s press release setting out the drill results.

In addition, the company has retracted the following disclosures that were also contained in the October 25, 2018 press release:

“….announces that drilling into the new extension of the Canyon Creek Skarn Zone at its Stardust Project in north-central British Columbia has returned the thickest and richest mineralization ever intersected at the project.”

“DDH18-SD-421 has intersected significantly longer and higher-grade intervals of mineralization than has ever been observed in the 406 drill holes (approx. 80,000 metres) of historic Stardust drilling. The average length of intercepts comprising Stardust’s NI 43-101 resource is 4.3 metres.”

“The qualified person who prepared, supervised the preparation or approved the scientific disclosure in the October 25, 2018 [press release] was Ian Neill, P.Geo,” Sun Metals said in a statement signed by CEO Steve Robertson. “Mr. Neill is the vice-president, exploration of the company and accordingly is not independent of the company,” Sun Metals said.

On Friday, Sun Metals was the most actively traded stock on the TSX Venture Exchange. The shares were up 6.38% or $0.015 to 25 cents on volume of over 5 million. That leaves Sun Metals with a market cap of $12.4 million, based on 77.57 million shares outstanding.

It is a high-grade polymetallic Carbonate Replacement Deposit with a rich history, the company has said.

In its October 25 press release, the company said it believes that drilling is successfully tracking a major mineralizing fluid pathway towards the heart of this high-grade system.