In a unique arrangement, Tectonic Metals Inc. [TECT-TSXV] is not only exploring two mineral prospects on native Doyon land in Alaska, Doyon, Ltd., one of the state’s largest native regional corporations, is also taking a huge ownership in the company, which in turn is funding the exploration programs.

In a recently completed private placement, Doyon, Ltd. subscribed for 10,473,000 units of Tectonic units for a subscription price of 20 cents per unit. Each unit comprises one common share and one-half share purchase warrant exercisable at 40 cents which will expire April 17, 2022. Doyon is now Tectonic’s largest, single shareholder with a 16.1% undiluted ownership and a 22.3% ownership on a partially diluted basis.

In an interview, Tony Reda, President and CEO, said what attracted the veteran Tectonic management team to Alaska was the potential for the discovery of Tier 1, elephant-sized mineral deposits. 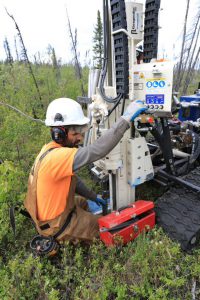 “Having Doyon as a shareholder means that their corporate participation goes beyond exploring on native land in Alaska; it could be also be on State land or even federal land in Alaska,” said Reda. “By dealing directly with the native Doyon, who are pro-business and pro-mining, it is a much more streamlined process. In 2018, we signed an agreement with them for project advancement from exploration right through to production. Now we have strengthened our relationship even further with Doyon, Ltd. as a shareholder.”

Reda said Tectonic applies filters to choose which projects to explore. “For example, we focus on large scale districts with big deposits such as 5-million-ounce mineral footprints. We also look at the various risks, including environmental aspects, infrastructure and remoteness,” Reda pointed out. “Our Northway and Seventy-Mile prospects ticked all the boxes.”

Seventy-Mile is a gold district along the Alaska-Yukon border where placer mining is still taking place. “High-grade gold mineralization is present in historical drill core as well as in rock samples with visible gold and soil samples,” said Reda. “We are looking at a greenstone belt that has not been primarily explored where we are targeting shear zone-hosted gold deposits. Both Northway and Seventy-Mile have the potential to host more than one deposit.”

Reda said he thinks that exploration suspensions due to the coronavirus will soon be lifted in Alaska and he hopes a Rotary Air Blast drilling program can be conducted at Seventy-Mile property that will test five to eight prospective zones that have been defined by grab samples, gold-in-soil and geophysical anomalies on the interpreted mineralized shear zone. Historical drilling on the Seventy-Mile property has returned 7.8 g/t gold over 4.87 metres and 1.34 g/t gold over 44.2 metres.

Work is also planned for the Tibbs prospect located 175 km southeast of Fairbanks and 35 km east of the producing Pogo Mine in the Goodpaster District. The project hosts three new Tectonic drill discoveries including 6.03 g/t gold over 28.9 metres, which is open in every which direction at the plus one-kilometre Michigan Zone.

The Northway prospect, which covers 175,000 acres in eastern Alaska along the Alaska Highway, “has smoke all over the place,” said Reda. “We have expanded two gold soil anomalies that we have increased to over one kilometre long.”

Across the border in the Yukon, the Tectonic team took the Coffee Project (Kaminak Gold Corp.) from grassroots to over 5 million ounces and sold it to Goldcorp for $520 million. Interestingly, there is the huge Casino copper deposit near the Coffee deposit. “For Northway, we also see gold, copper and polymetallic potential,” noted Reda. “Our exploration has revealed copper, molybdenum and gold soil anomalies co-incident with geophysical anomalies.”

Exploration plans at Northway for this season include bringing in two porphyry experts for consultation and conducting desktop studies to determine if the probable exploration costs are in line with the company’s yearly guidelines on delineating a district scale opportunity.

Regional stream sediment and ridge-top soil sampling completed at Northway by Tectonic in 2018 identified Target 6 and Target 7 with coincident magnetic and soil geochemical anomalies located 30 km apart.  In 2019, Tectonic completed a two-phased exploration program with the goal of refining the soil geochemical anomalies at Target 6, a Cu-Mo-Au anomaly, and Target 7 which has high-grade gold-in-soil anomalies, and defining drill targets for later follow-up.

Tectonic Metals has been utilizing the local work forces on their exploration projects and will continue to do so.