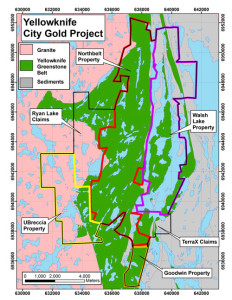 TerraX Minerals Inc. [TXR-TSXV; TRXXF-OTC; TX0-Frankfurt] has received assay results from a nine hole drill program testing quartz vein and replacement style mineralization at the Sam Otto target on its Walsh Lake property of the Yellowknife City Gold Project (YCG), immediately north of Yellowknife in the Northwest Territories, Canada. This zone had not previously been tested by TerraX, but had sporadic drilling reported from the 1980s and 1990s. The drill holes reported today were drilled over 100 metres of strike length on two zones (Sam Otto West and Sam Otto East) and confirm that Sam Otto is a big mineralized system. All drill holes intersected wide, pervasive and persistent zones of mineralization, including:


TerraX reported that, drilling at Sam Otto totaled 1,510 metres in 9 holes testing 100 metres of strike along two parallel north-south striking and steeply east dipping mineralized zones. The holes were designed to hit mineralization approximately 30 to 160 metres below surface trenches sampled by TerraX in 2013. Six holes were specifically targeted on the Sam Otto West Zone. Three holes, (TWL16-007, 008 and 010) were drilled on the same section line (550N) and were designed to intersect both the Sam Otto East and West Zones. TWL16-010 was collared in the East Zone and therefore had an incomplete intersection across that zone, but successfully intersected all of the West Zone. Drill holes TWL16-011 (section 565N), and TWL16-012 and 013 (section 600N) were the most northerly holes and showed the strongest mineralization in the Sam Otto West Zone. To the best of TerraX’s knowledge, the Sam Otto West Zone trend has not been tested for at least 500 metres of strike north of holes TWL16-012 and 013.

Zones of mineralization were evenly mineralized with a highest individual assay result of 8.39 g/t Au in TWL16-006 in the West Zone. All drill holes reported here intersected additional narrower mineralized zones adjacent to the two targeted zones, both in the hanging wall and footwall of the East and West zones. Overall the Sam Otto drilling results indicate a large mineralizing system that TerraX believes has the potential to host large high grade zones along a gold trend that has been identified by trenching, mapping, historical drilling and geophysics for at least 1.5 kilometres of strike length.

A map and cross sections showing the location of drill holes on the Sam Otto target area: 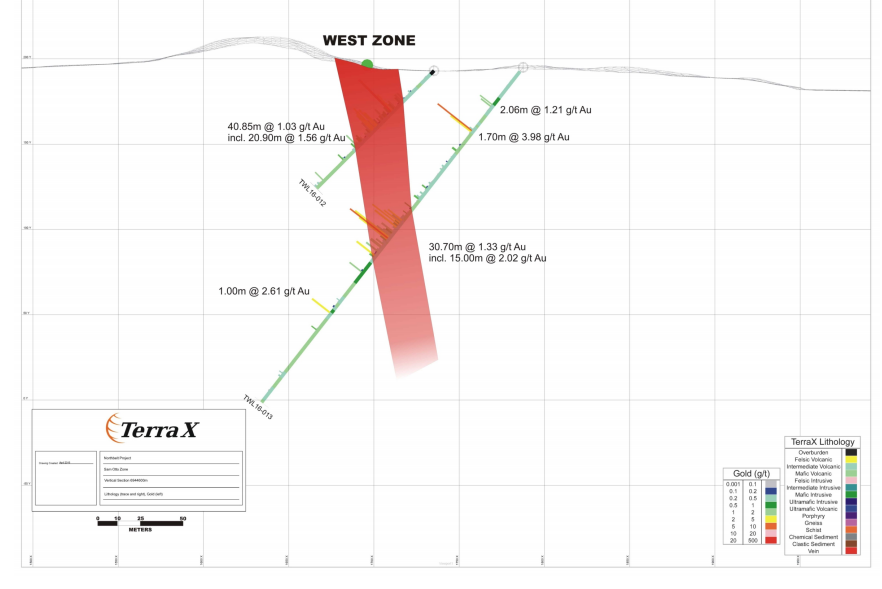 The obvious increase in grade and width of zones of mineralization towards the north, and the potential to demonstrate continuity of mineralization along strike has resulted in a decision to do more work on the Sam Otto target. In particular, the north-south striking zones drilled in this campaign are known to be intersected by a well mineralized (surface sampling and historical drilling) northeast trending structure (Dave’s Pond) located approximately one kilometre to the north of the 2016 drilling. This intersection area, and the entire projected trend of the Sam Otto and Dave’s Pond structures, will be subjected to a detailed surface magnetic survey in the spring of 2016, followed by detailed mapping and prospecting along the trend to identify targets of likely higher grade within the large mineralized system. For more information see the company’s April 13 news release at www.terraxminerals.com.

The Yellowknife City Gold Project encompasses 118 km2 of contiguous land immediately north and south of the City of Yellowknife in the Northwest Territories. Through a series of acquisitions, TerraX now controls one of the six major high-grade gold camps in Canada. Being within 15 km of the City of Yellowknife, the YCG is close to vital infrastructure, including transportation, service providers, hydro-electric power and skilled tradespeople.

The YCG lies on the prolific Yellowknife greenstone belt, covering 23 km of strike length on the southern and northern extensions of the shear system that hosted the high-grade Con and Giant gold mines