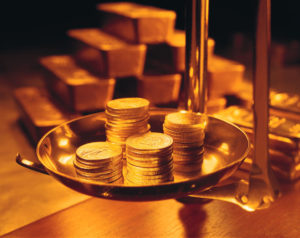 Barring a continuation of central bank policies that got the world into the economic mess that exists today, history will probably show that the past five years represents a once-in-a-lifetime aberration in the gold market.

Beaten up investors can hardly take solace in the fact that gold’s decline hasn’t been as precipitous as oil and many of the base metals. The primary reason for this is the fact that the impact on the share prices of gold producers and exploration companies from declining gold prices has been disproportionally worse than the decline in the actual metal.

In the many years I’ve been in this business I have never witnessed sentiment for gold and gold equities plumbing levels that we’ve seen in the past few years. Picking a bottom has been next to impossible as I learned to my detriment a few years back when gold equities reached lows last seen during the historic market downturn of 2008-09. After concluding the bottom had to be in and placing my bets, the market proceeded to drop by another 50%. Go figure.

Markets these days are enormously complex and are subject to manipulation just about everywhere as can be seen by Germany’s Deutsche Bank rigged gold and silver prices admission as well as other banks being in on it too. I would include technical analysis in this manipulative assertion given the ability of purveyors of this black art to paint charts to affect directional changes in the marketplace.

I’m hardly a big fan of technical analysis and despite arguments to the contrary, I don’t know anyone that makes serious money betting on their chart-based analysis. In fact, I often wonder if the market tracks the charts or vice versa – sort of like a self-fulfilling prophecy.Â  Nonetheless, I would be the first to admit that the practice of technical analysis probably has significant influence in the marketplace.

High frequency trading, where proximity to exchange computers can provide advantages measured in nanoseconds, means investment banks can front run client’s orders. While the profits aren’t egregious on a single transaction basis, they can be astronomical given the volumes that are transacted.Â  Because of Wall Street’s influence with regulators and politicians, these practices are unlikely to be halted any time soon.

Just recently I read that legislators in the United States have proposed new regulations to deal with conflicts of interest in providing retirement advice. Loopholes in the retirement advice rules have allowed some brokers and other advisers to recommend products that put their own profits ahead of their clients’ best interests. The current system allows firms to benefit from backdoor payments and hidden fees that are often buried in fine print.

While there are obviously many other examples, this speaks to the underlying corruption in capital markets worldwide that are hurting retail investors while benefiting the big investment banks.Â  Is it any wonder that investors have become disillusioned with these practices, which unfortunately have gone mainstream and are seeking safer investment opportunities?

Not only have stock markets seemingly gone berserk, leadership races for the two major parties in the United States have attracted global attention – not to mention concern about radical policies that could ultimately affect the global economy.

I can’t say that the U.S. primaries have ever really twigged my interest that much until this year’s race for the leadership of the Democratic and Republican parties. It’s simply too much fun to miss!Â  In the former’s case, the competition is between, Hillary Clinton, a Wall Street-funded former first lady and a rabid socialist (Bernie Sanders) whose policies are so far left as to defy description.

Not to be outdone, the front runner for the Republicans (Donald Trump) is a reality TV star who claims to be a financial wizard and multi-billionaire – but won’t release his personal financial statements. He’s seen several of his businesses including a non-accredited university and a casino go bust, leaving investors holding the bag.

More to the point, the fact that a blustery, foul-talking candidate like Trump can gather so much support speaks to Americans’ disgust with their current economic system including assertions by academic economists that all is well and the future is rosy.

Things really aren’t much better in Europe with its massive refugee crisis, threat of terrorism, negative interest rates, growing unease with central bank policies, and potential “Brexit” by the United Kingdom which could hasten the demise of the European Union. Japan isn’t doing much better where despite negative interest rates the Yen has recently been climbing steadily against the U.S. dollar, with gold as a beneficiary.

While I’m somewhat gun shy predicting the end of the five-year bear market in gold, the current action in the gold market looks like a key inflection point and might well represent a sustainable trend that could see the metal move substantially higher. You can’t argue with the good performance of select gold stocks which seem to portend higher prices ahead.

David Duval is a Contributing Editor of Resource World magazine.