Martin Vydra, President of Giga Metals Corp. [GIGA-TSXV; HNCKF-OTCQB; BRR2-FSE] reported that testwork conducted on mineralized material from the 100%-owned Turnagain River polymetallic project 70 km east of Dease Lake, northern British Columbia, at the University of British Columbia (UBC) has demonstrated significant mineral sequestration of CO2. The deposit hosts values of nickel, cobalt, copper, platinum and palladium. The greenhouse gas is absorbed by exposing tailings or other waste rock to the atmosphere, which converts the host rock minerals to carbonate minerals, locking away the CO2Â for geological time periods.

â€œThis is exciting news,â€ said Mr. Vydra. â€œWe now have empirical data that supports our ambition to build the worldâ€™s first true carbon neutral nickel mine, meaning a project that achieves carbon neutrality without purchasing carbon credits. As the only North American undeveloped nickel deposit of this scale solely focussed on the Class I and the battery chemical market, we think our emphasis on low carbon and other ESG principles will make us a desirable source of battery metals for electric vehicles.â€

The test work was conducted by a team led by UBC’s Dr. Greg Dipple, who has been studying mineral sequestration of CO2Â in mine tailings around the world for more than 15 years and whose work has recently been cited in the MIT Technology Review outlining the potential for mineral carbonation processes to permanently sequester vast amounts of CO2Â and the interest that is being shown in generating carbon credits through this form of sequestration.

â€œThe initial testing of the Turnagain material took place over a four-week period and showed average absorption rates of 2.7 kg CO2/m2/y for the control sample, with absorption continuing at this rate over the 4-week test period,â€ said Dr. Dipple. â€œA second sample was tested with periodic mixing of the tailings layer, reflecting potential active management of a tailings facility; this second sample showed a sustained increase in carbon sequestration rates of 25%. During periods of optimal moisture and mixing, the sequestration rates increased up to 3 times the long-term average. We look forward to working with Giga Metals to conduct additional tests on larger samples.â€

In the 2020 Preliminary Economic Assessment (PEA), Giga Metals disclosed expected emissions from a commercial operation of less than 2.5 tonnes CO2e/tonne of nickel produced in concentrate with a diesel haul fleet (Scope 1 + 2), and less than 0.75 t CO2e/t Ni with an electrified haul fleet. This is an order of magnitude lower than the global weighted average of 25.6 tonnes of CO2e/tonne of finished nickel reported by Wood Mackenzie.

At the demonstrated basic sequestration rate of 2.7 kg/m2/y and factoring in the tailings management facility size used in the PEA, Giga Metals estimates that approximately 900,000 tonnes of CO2Â would be sequestered over the mine life, or 0.72 tonnes CO2Â per tonne nickel produced. Seasonal variations and management strategies may cause CO2Â sequestration rates to vary. This sequestration rate would make Turnagain a carbon neutral project if an electrified haul fleet becomes available as depicted in the chart below. 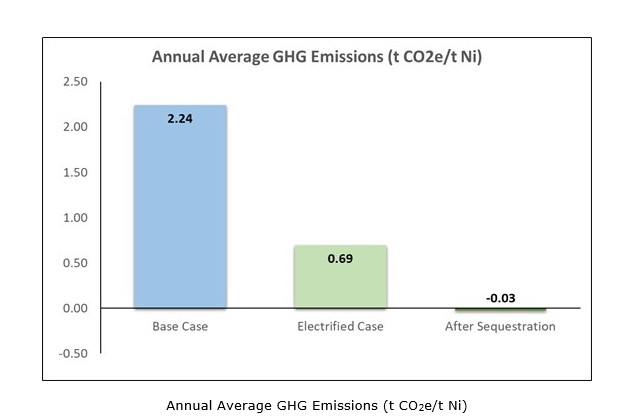 Giga Metals Corporation is focused on metals critical to modern batteries, especially those used in Electric Vehicles and Energy Storage. Turnagain is the only undeveloped Canadian nickel project of this scale that is focussed on the battery market rather than the steel market.