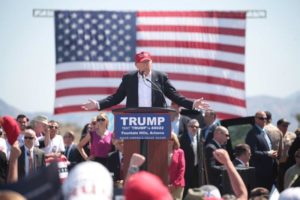 With the United States’ presidential primary coming to an end it’s worth considering what impact the campaign’s most radical candidate, Donald Trump, could have on market sentiment for gold.

At least one noted economist, Martin Murenbeeld, Chief Economist for Dundee Economics, believes it could be significant given Trump’s stated belief that the dollar is grossly overvalued – a fact that in Trump’s analysis has led to massive job losses in the US.

“Political pressure in the US will drive the dollar lower,” Murenbeeld predicts, arguing that “more dollar weakness is in the cards.”

Should the blustery reality TV star achieve his goal of reaching the oval office, there could also be some profound changes in the way the US deals with its trading partners not to mention its global military alliances. That type of political uncertainty is almost certain to rattle markets, creating new safe haven demand for gold, analysts predict.

Based on his public statements, Trump is also a strong believer in leveraging economic activity with debt which, in the not too distant past, has seen at least two of his personal business ventures go bust. Could U.S.A. Incorporated suffer the same fate under his management?

Trump said he considers himself the “King of Debt,” bizarrely claiming that the US would never default on its debt because all it would have to do is print more money to buy it back at discounted prices – just like they do in the developing world.

A statement like that lends strong support to the argument for owning alternative currencies, namely gold, and indeed may already be reflected in the metal’s strong performance so far this year. All the uncertainty associated with a potential Republican win in the upcoming US election should be enough to fuel fear and uncertainty in the marketplace and move risk averse investors into gold.

What can reasonably be described as “the perfect storm” for gold appears to be forming on the horizon although the timing remains uncertain. The massive rally in gold stocks over the past few months suggests a big move higher might not be far away. Nothing goes straight up but gold’s performance so far this year has defied the odds and laid waste to much lower forecasts by investment banks, including the perennially bearish Goldman Sachs. The only thing missing is a flashpoint and there are numerous possibilities that could spark gold’s move to sharply higher levels.

Central banks have been net buyers of gold since at least 2009, effectively limiting the amount of gold available for other uses, including purchases by Exchange Traded Funds (ETFs). Since January of this year, London-based ETF’s have been large buyers of gold on behalf of investors seeking exposure to physical gold, a trend not seen for years.

Chinese gold demand has been nothing short of extraordinary. Withdrawals of bullion on the Shanghai Exchange last year reached an astonishing 2,597 tonnes, representing a little over 80% of all gold mined worldwide in 2015. According to ADM Investor Services, a major international player in the futures brokerage industry, “Net gold exports by the UK – mainly to support strong Asian (especially Chinese) demand …. have been a feature of the market since 2013.”

ADM also believes that gold bears are vulnerable to current physical trends in gold bullion because there is virtually no gold float (physical gold in the market). “There is nothing supporting more than US $200 billion of trading every day in unallocated (paper) gold instruments which accounts for more than 95% of gold trading in London,” it contends.

“If we are correct, the London Bullion Market is running into a problem and is facing the biggest challenge since it collapsed from an insufficient supply of physical gold in March 1968,” ADM adds.

While not always an exact correlation, dollar strength and gold weakness (and vice versa) has been a hallmark of the gold market for decades. However, the power to set gold prices is shifting from the LBMA, an international trade association representing the London market for gold and silver bullion, to Asia.  On April 19, 2016, China’s Shanghai Gold Exchange (SGE) launched a Yuan-denominated physical gold benchmark gold contract which should lead to a more realistic price for physical gold by shifting price discovery in the gold market from London to Asia.

ADM also notes that “more than US $7 trillion of bonds now have negative yields thanks to unconventional monetary policies like ZIRP/NIRP, and gold investing can be justified on a yield basis.”

One should also not forget that there are vast pools of western capital that are grossly underweight if not zero weighted gold. Inflation, deflation, rising credit risk, declining confidence in policy makers, including the prospects of a Trump presidency, and doubts about central bank policies are increasingly becoming positive for gold, setting the stage for a perfect storm that could drive gold to historic highs.