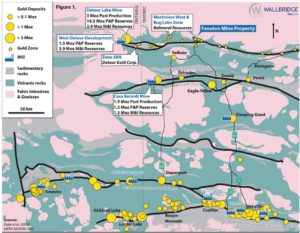 Wallbridge Mining Company Ltd. [WM-TSX] recently purchased the Fenelon gold mine property from Balmoral Resources Ltd and has initiated a prefeasibility study for the project. The Fenelon Mine property is located in the Nord-du-Québec administrative region, ~75 kilometres west-northwest of the city of Matagami, in Québec.

The Fenelon Project is close to the towns of Val-d’Or and Amos where several mining companies have offices and where supplies, personnel and services are accessible by road.

Marz Kord, President and CEO stated, “We are quite excited to have completed the purchase and the initial financing of the Fenelon gold mine property. In the next few months, our focus will be on completing the prefeasibility study and permitting of the project. Upon confirming positive economics, we expect to be in a position to make a production decision in the second quarter of 2017, proceed with building the site infrastructure and dewatering of the existing ramp and soon after with production from the top 100 metres of the deposit. Additionally, we are planning an exploration campaign focused on expanding resources around the existing infrastructure, while also following up on a number of gold intersections that show potential for further expansion of the resource at depth and along strike.”

Wallbridge has engaged the services of InnovExplo and SNC-Lavalin to “complete the prefeasibility study of Fenelon. The prefeasibility, focusing on the development and mining of the top 100 metres of the deposit, is expected to be completed by 2016 year-end. Permitting of the Fenelon project is ongoing. Wallbridge expects the production permits to be received in the first quarter of 2017”.

To finance the development of the Fenelon gold mine property and provide general working capital, Wallbridge has filed a final short form prospectus in the Provinces of Ontario and British Columbia and obtained a receipt from the Ontario Securities Commission, as principal regulator, to qualify the distribution of units of Wallbridge and flow-through shares of Wallbridge and the common shares and warrants underlying the units. If the maximum offering is completed, the company will raise aggregate gross proceeds of $4,500,000.