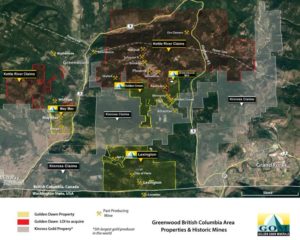 The highly prospective acquisition adds significant mineral rights to the May Mac, Lexington and Golden Crown mines where Golden Dawn is working toward renewing operations. Work has commenced to reactivate the Greenwood mill which had been on care-and-maintenance for eight years.

In September, rehabilitation began of adits No. 6 and 7 at the May Mac Mine, with the stated objective of “cutting drilling stations for extensive underground drilling together with extending access to allow bulk sampling.” Plans call for bulk sampling to be processed at the Greenwood mill.