As with other base metals, zinc prices were impacted negatively by COVID-19-related mine shutdowns and waning industrial demand in key sectors of the global economy, most notably auto and steel manufacturing.

ZincÂ isÂ mainly used toÂ galvanizeÂ steel or ironÂ and is a major rust inhibitor. The strength and flexibility of zinc alloys mean they areÂ widely usedÂ toÂ create dieÂ casts for industrial usesÂ -Â for example,Â in the production ofÂ carÂ or machineÂ parts.Â Zinc is also used to makeÂ brass and bronze.Â  Zinc oxide is mainly used in the production of rubber,Â while zinc sulphide has usesÂ such as XÂ -Â ray screens, in optics, and as a pigment.

Zinc prices on the London Metals Exchange (LME) averaged US$1.03 per pound in 2020, lower than the US$1.16 per pound average in 2019. By year end, zinc prices had risen to US$1.24 per pound, well off its low of US$0.80 per pound in March of 2020. Prices climbed to an 18-month high in November after VedantaÂ suspended mining at its GamsbergÂ zincÂ mineÂ in South Africa following an accident that trapped 10 workers and included two fatalities.Â  The mine resumed production in January 2021.

LME stocks climbed by 151,000 tonnes in 2020, a 295% increase from historically low 2019 levels, with stocks finishing the year at 202,225 tonnes. Total global exchange stocks remained well below historical levels, ending the year at 6.4 days of global consumption, well below the 25-year average of 18 days.

According to Wood Mackenzie, a commodity research consultancy, 2020 global zinc mine production decreased 3.4%, with total production reaching 12.5 million tonnes as mines in South America were forced to close for extended periods in the first half of 2020.

The consultancy expects global zinc mine production to grow 5.5% in 2021, largely attributable to a resumption in production at South American mines. Demand in China rebounded strongly in the second half of 2020 and it was one of the only countries to show growth in 2020. China is the world’s top zinc producer, with output reaching 4.3 million tonnes in 2019. However, Fitch Solutions believes China’s zinc mine production will stagnate over the coming years due to declining ore grades and increasingly stringent environmental regulations.

At the present time, China accounts for about 50% to 60% of global commodity demand that will likely determine whether the industry is entering a “Supercycle” that is certain to elevate prices for all industrial commodities. (The broad rise in commodity prices started after Beijing committed stimulus for infrastructure projects in 2020 and many analysts believe that momentum will carry through into 2021 and perhaps beyond). Also supporting the Supercycle scenario for commodities, a strong rebound is anticipated in India whose economic growth forecast has been raised to 12.6% for 2021-22 by the OECD.

According to zinc miner Teck Resources, the market for refined zinc improved during the fourth quarter, “as manufacturing, automotive, construction and infrastructure sectors all improved.” Teck also notes that “the slow reopening of economies in Europe and North America started to bring consumers back into the market, with steel order books looking strong into the first half of 2021.”

Despite the challenges arising from COVID-19 in Europe and North America, galvanized steel prices have been rising since the second quarter of 2020, the result of low inventories combined with strong growth which kept steel mills running at high output levels towards the end of 2020.

In China, demand remained well supported into December 2020 with galvanized steel benefiting from a strong home appliance sector and improved automotive demand in the second half of the year. The zinc concentrate market remained in deficit in the fourth quarter, with spot treatment charges remaining below the annual negotiated terms for 2020.

Zinc concentrate shipments into China rose 21% to the end of December over the previous year. Despite an increase in imports over 2019, the global concentrate market remained tight as supply from Latin America during 2020 remained under pressure.

Investment bankers JPMorgan and Goldman Sachs both support the thesis of an impending commodity supercycle. Contributing to their bullish thesis is a weaker U.S. dollar, rising inflation risks and demand driven by additional fiscal and monetary stimulus from major central banks. 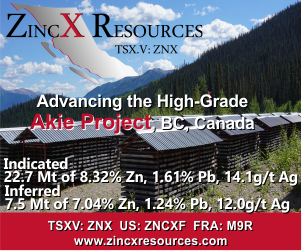 ZincX Resources Corp. [ZNX-TSXV;Â ZNCXF-OTC;Â A2JLRM-FSE] holds interests in a large number of mineral tenures along strike from its 100%-owned, advanced stage, flagship Akie zinc-lead-silver-barite property located 260 km north-northwest of the town of Mackenzie, northeastern British Columbia. The 116 km2 Akie property is favourably situated within the Kechika trough, one of the most prolific sedimentary basins in the world for SEDEX (sedimentary exhalative) zinc-lead-silver and stratiform barite deposits.

The contiguous claim block covers the highly prospective Gunsteel formation which is the primary host lithology for SEDEX deposits and prospects within the Kechika trough.

Recognizing the excellent prospective nature of the trough, ZincX has undertaken a targeting initiative across the Kechika Trough. Exploration has identified numerous areas of interest of which 19 have been classified as high-priority targets selected for future exploration programs.

Drilling by ZincX since 2005 has identified a significant body of baritic-zinc-lead SEDEX mineralization on the Akie property known as the Cardiac Creek deposit that is hosted within the Gunsteel formation. 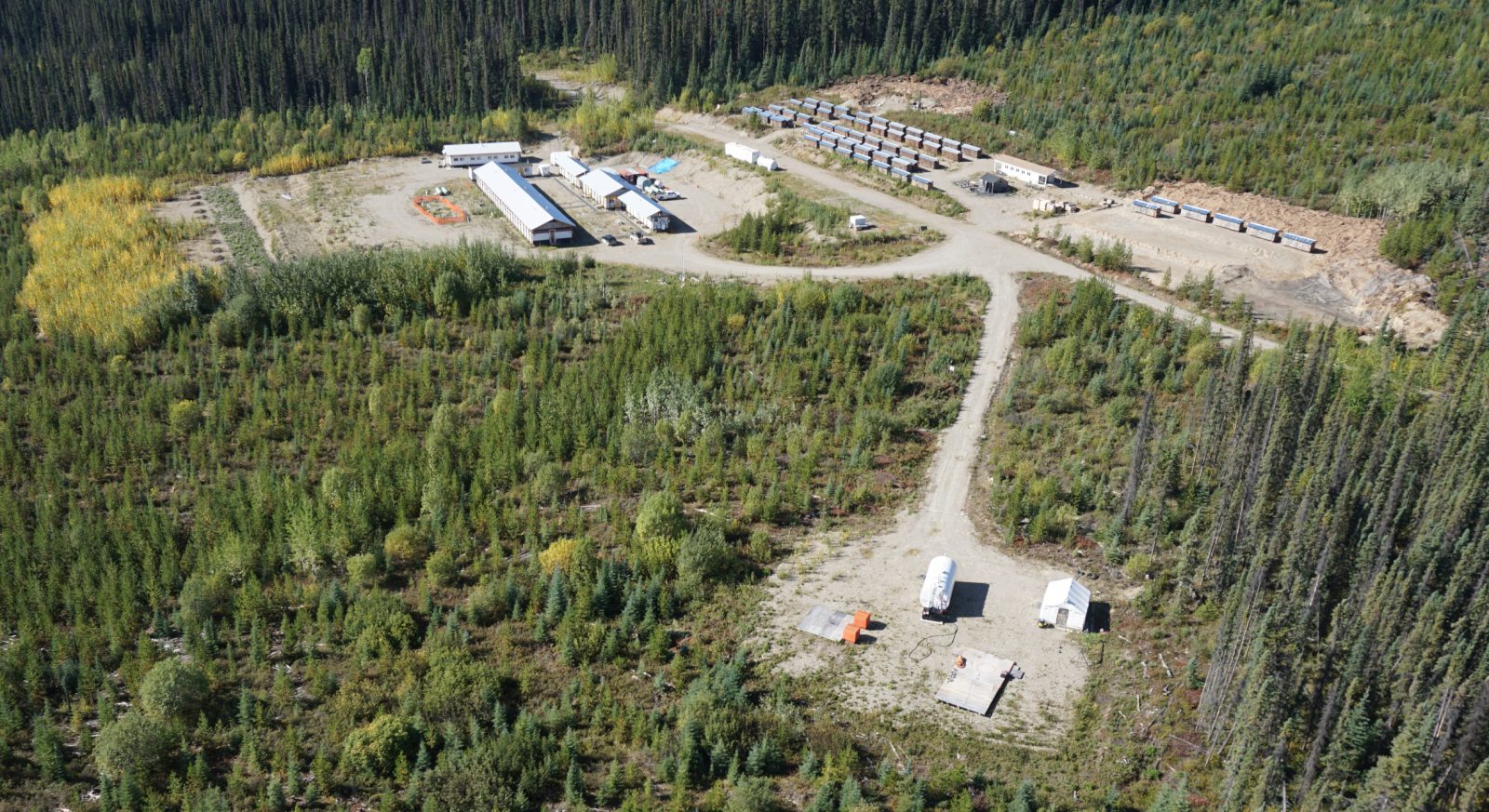 A 2018 Preliminary Economic Assessment delivered robust economics for the Akie deposit. These include an After-tax Net Present Value (7% discount) of $401 million with an After-tax Internal Rate of Return of 27%. The figures are based on mining 25.8 million tonnes with an After-tax payback of 3.2 years. Initial Capex is calculated at $302.3 million with a life-of-mine total Capex of $617.9 million. The All-in OPEX totals $102.4 per tonne milled.

Peeyush Varshney, CEO, stated: “While we continue to focus on maximizing value from our primary asset, the Cardiac Creek deposit located on the Akie property, we are also looking to unlock the blue-sky potential of our Kechika regional project.”

The 19 ranked high-priority targets are located on almost every property within the district. Several target areas are classified as drill ready while others require additional work in preparation for drilling. The above noted Mt. Alcock prospect, a high priority drilling target, is located approximately 40 kilometres northwest of the Akie property and 20 kilometres northwest of the Teck Resources/Korea Zinc Cirque property. Mt. Alcock has seen limited and extremely shallow drilling by previous operators that intersected mineralization grading 9.30% combined zinc+lead and 1.20 oz/ton silver over 8.8 metres, including 14.20% combined zinc+lead and 1.60 oz/ton silver over 3.6 metres. Down-dip drilling is planned.

Using advanced software, ZincX has constructed the Kechika trough exploration database that represents over 40 years of exploration data derived from various sources. Currently, the database includes over 1,250 rock samples, 1,775 silt samples, 24,000 soil samples and 13,875 metres of drilling. Collectively this work represents in excess of $7.3-million in historical exploration expenditures. This huge database is a wealth of geological information that can quickly and cost-effectively advance the company’s mineral prospects.

Since June 2020,Â demandÂ forÂ zincÂ and lead has bounced back, led by a recovery in China, said Trafigura Group Ltd., the world’s second-biggest independent metals trader. … “We remain positive aboutÂ demandÂ for both metals on a forward-looking basis, with continued support from both construction and automotive industries.”

With a positive PEA for its Akie deposit and numerous drill-ready prospects along strike, ZincX Resources is in an excellent position to deliver value for its shareholders.

A Weekly Recap of All Things Resources to Friday, November 18th

A Weekly Recap of All Things Resources to Friday, November 11th

A Weekly Recap of All Things Resources to Friday, November 4th

Russia and China to fight for Bolivian lithium reserves