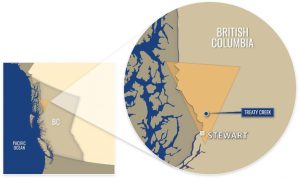 B.C.’s prolific Golden Triangle is often referred to as “Elephant Country” given the intensity of mineral showings and deposits located there and because of the sheer scale of many of those deposits in this politically mining friendly jurisdiction.Â  In this case a combination of the two may have been discovered as Treaty Creek has potential for multiple district-scale deposits on the same property.

The first mineralized zone at Treaty Creek to have a maiden resource is the Goldstorm.Â  As explained in the March 9th press release it contains 19.4 million ounces at 0.74 g/t gold equivalent Measured and Indicated and 7.9 million ounces at 0.79 g/t gold equivalent Inferred.Â  This makes it one of the largest gold deposits discovered in the last decade.

A critical factor of metal deposits isn’t just the size, but it’s shape, consistency, and depth.Â  Fortunately, the richest mineralization at Goldstorm is located in the close to surface “300 Zone.” The deposit is contiguous and is remarkably consistent as well.Â  These factors create the potential for Goldstorm to be an open pit operation which is the least expensive route for both capital expenditures and operational expenditures, with the advantage of being able to mine the highest grade first.

The maiden or initial resource calculation is exactly that: initial.Â  The Goldstorm Zone remarkably remains open in all directions and at depth.Â  As Tudor Gold’s VP of Exploration, Ken Konkin has stated: “This is just the first chapter of a very good book”.Â  The edges or boundaries of the deposit are currently unknown with geophysical signatures indicating potential for significant expansion.

Konkin, who was a key player in the development of the Brucejack Mine (Pretium Resources) just a few kilometers south of Treaty Creek, is an expert in both large-scale systems and geology in the Golden Triangle.Â  He has often spoken of the importance of the “frequency for occurrence”, “frequency of distribution”, and “structural traps” characteristic of world class hydrothermal systems that create a predictable “rhythm”. 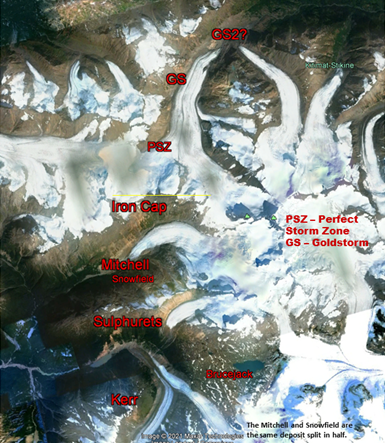 He’s stated that the Sulphurets Hydrothermal System, which includes Pretium (Brucejack mine), Seabridge (KSM deposits), and Treaty Creek, is a perfect example of this rhythm and refers to its many deposits as a “string of pearlsâ€¦â€¦just really big pearls!”Â  The potentially massive deposits on Treaty, including the Goldstorm and the Perfect Storm Zone, are located exactly where they should be within this system.Â  Seabridge’s KSM deposits (Kerr, Sulphurets, Mitchell, Iron Cap) comprise the largest undeveloped gold deposit(s) in the world containing P&P reserves of 38 million ounces gold and 10.2 billion pounds of copper.Â  Each deposit is approximately 2.5 – 3km apart and this “rhythm” continues northward through Treaty Creek with the Perfect Storm, the Goldstorm, and potential Goldstorm 2 zones.

The yet to be drilled Perfect Storm zone has the same type of structural, geological, and geophysical characteristics as the other major deposits in the “string of pearls”.Â  Along with expanding the Goldstorm, drilling the Perfect Storm will be one of the focuses for Tudor in 2021.

It looks like Eric’s prediction is remarkably accurate so far.Â  With expansion of the Goldstorm and planned upcoming drilling of both the Perfect Storm and Eureka, the Treaty Creek project is primed to have a break-out year in the gold space.

Treaty Creek is just 20km down a valley to a paved highway and high-transmission power lines with some of the cheapest power in the world. This is critical as power accounts for approximately 25% of mining costs.Â  From there it’s only a 90-minute drive to bulk tonnage shipping ports in Stewart, BC.Â  The project has excellent gold recoveries, water, a mining friendly government, and supportive First Nations in the area.

What grade does it take to make a mine?Â  That depends on a lot of factors, but critical ones include cheap power, proximity to roads and shipping ports, good recoveries, ample water, and close-to-surface deposits that can be open pit mined.Â  Fortunately, Treaty Creek appears to have these characteristics.Â  The in situ (in ground) grade is often lower than the head grade as initial beneficiation can concentrate the ore prior to processing.Â  Canada’s newest gold mine, the Eagle mine (Victoria Gold) located in northern Yukon, produces with 0.65 g/t AuEq grade.Â  Fort Knox (Kinross Gold) in Alaska produces at 0.4 g/t AuEq.Â  Many mines in northern BC owned by companies like Centerra gold and Imperial Metals operate mines averaging well under 1g/t AuEq.

Tudor Gold appears to be doing an exceptional job at adding shareholder value when considering how much gold has already been proven up given the exploration expenditures to date.Â  Since their inception in 2016 it looks like they’ve raised close to $40M and they’ve discovered over 27 million ounces of gold!Â  That’s less than $1.5/Oz gold CAD.Â  Simply Amazing.Â  That number would go down when we only consider exploration dollars at Treaty Creek.

Because of the fully carried nature of American Creek’s 20% interest, it actually costs American Creek $0 / ounce regardless of how many ounces are potentially discovered.Â  The American Creek shareholders are in the enviable position of seeing their stock value rise as Treaty Creek continues to be explored and developed without experiencing further dilution associated with that development.Â  Currently American Creek shares are undervalued when considering the present market valuation of the Treaty Creek project.

The global gold market and gold miners have a dilemma. Gold ounces in the ground are being mined faster than new ounces are being replenished, especially when it comes to new discoveries and large discoveries.Â  Gold production is declining, and the mine life of new projects is getting shorter with smaller deposits being developed.Â  This is increasing demand for the best projects and in particular, large projects, at a time when gold producers are making more money than at any time in their history. 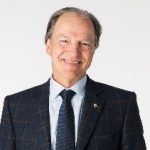 Pierre Lassonde, the Canadian billionaire who is the past president of Newmont Goldcorp, has sat on the World Gold Council, and is Chair Emeritus of Franco Nevada ($23 billion) summed up the opportunity applicable to the Treaty Creek project quite nicely in two recent interviews.Â  Back in the fall of 2020 he stated:

“If you were to think like an investor now, what would you do to convince some of these smaller companies to enhance shareholder value?Â  What could the junior mining industry as a whole do right now that could be more attractive for investors at this time?”

“You know, the fundamental thing about junior mining is at the end of the day 90% of the value in our business is created by the drill bit.Â  So, you’ve got to look at your finding costs per ounce, and if these companies are not able to find gold for like $20, $30, $40 an ounce (they) should not be in this business.Â  What I look at as an investor, the bottom line is what’s your cost of finding an ounce of gold?Â  That’s your common denominator.Â  That’s where you find the value for shareholders.”

Gold is being discovered at Treaty Creek for less than $1.50 CAD ($1.18 USD) / Oz opposed to $20-$40/Oz, and they’ve only begun scratching the surface from a geological point of view.Â  American Creek shareholders are enjoying a $0/Oz rate.Â  As Mr. Lassonde stated, “(this) is where you find the value for shareholders”.Â  This truly is Elephant country and as Mr. Konkin put it “This is just the first chapter of a very good book”.Â  Based on the first chapter, this appears to be a book well worth reading.