A vast prospective and underexplored jurisdiction

Although large scale mines such as the Teck Resources Red Dog zinc mine, Hecla Mining’s Green’s Creek Mine, Coeur Mining’s Kensington gold mine, Northern Star’s Pogo and Kinross Gold’s Fort Knox all operate year round, the Arctic climate still provides formidable challenges to the smaller operator. The short summer exploration season means that much of the state remains underexplored.

Nonetheless, the state still hosts over 4,440 documented gold prospects, and over 2,700 documented non-gold occurrences, including some of the world’s largest deposits. Today, over 200 million ounces of gold has been delineated, in 20 of 61 placer districts.

During 2019, the State estimates the mining industry spent $162 million on exploration and $225 million on development. According to the Alaska Miners Association, since 1981, $3.7 billion has been spent on exploration.

Alaska’s mines produce coal, gold, lead, silver, zinc, and construction materials such as sand, gravel and rock. The export value from Alaska production was $1.7 billion in 2018. The mining industry accounted for $37 million in local government revenue and $112 million in state government revenue in 2019. The industry also paid $242 million in payments to Alaska Native corporations in 2019.

Alaska has a history of placer mining and it continues to this day with 205 active placer mines producing 41,295 ounces of gold with a gross production value of US$52 million in 2017, noted the AMA.

Despite some setbacks, Northern Dynasty Minerals Ltd. [NDM-TSX; NAK-NYSE American] continues to advance its 100%-owned Pebble copper-gold-silver-molybdenum-rhenium deposit, located 200 miles from Anchorage, one of the largest copper-gold projects in the world.

Freegold Ventures Ltd. [FVL-TSX; FGOVF-OTC; FR4N-FSE] is exploring two projects in Alaska: the Golden Summit and Shorty Creek projects. Golden Summit, located in the Fairbanks District, has indicated resources of 1.36 million ounces of gold and inferred resources of 1.6 million ounces. At Shorty Creek, 125 km northwest of Fairbanks, Freegold granted South32 Limited [SHTLF-OTC; SOUHY-ASX, LSE, Jo’burg] an option to earn a 70% interest in the Shorty Creek Project by making a commitment of US$30 million. The project has the potential to host a series of copper-gold-porphyry deposits.

Exploration and mining continue to play an important role in Alaska’s economy in terms of high paying jobs, government revenues and payments to Native corporations. Being underexplored, there is a tremendous opportunity for more mineral discoveries and mine development. The Fraser Institute ranked Alaska fourth in 2019’s list of attractive mining jurisdictions. Alaska perennially ranks highly on this part of its survey, dubbed the Best Practices Mineral Potential Index, and 2019 was no different. Respondents to the Fraser Survey ranked Alaska as seventh richest mineral province on Earth. 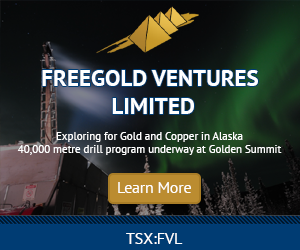 It is likely that 2021 will be an exciting year for Freegold as it rolls out exploration programs in a region that was ranked last year among the top five in the Fraser Institute’s Investment Attractiveness Index.

Freegold’s asset portfolio includes the Golden Summit Project which contains an already significant bulk tonnage resource and the Shorty Creek copper-gold porphyry discovery. Both are located in central Alaska not far from Fairbanks, a city with a population of roughly 100,000. 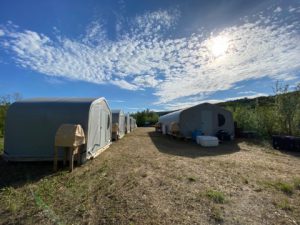 The flagship Golden Summit Project is located on the north portion of the Fairbanks Mining District, a northeast-trending belt of lode and placer gold deposits that compose one of the largest gold-producing areas in the state of Alaska. The Fairbanks Mining District has produced over 9.5 million ounces of placer gold, of which 6.75 million ounces have been recovered from streams that drain the project area. In addition, over 500,000 ounces of lode gold were recovered from historic past producing mines on the project.

During 2019 the company completed a re-interpretation of the existing drill results and came up with a theory that the old Cleary Hill higher grade veins were effectively a vein swarm, a series of veins and stockworking within a broad zone that appeared bend toward the Dolphin intrusive.

In February 2020, the company launched a drill program designed to test their revised interpretation which indicated that higher-grade mineralization may extend west of the old Clearly Hill Mine workings in an area of limited previous drilling as part of an effort to try and increase the grade of the previous resource and improve the overall project economics. The most recent resource update completed as part of a preliminary economic assessment (PEA) outlined an indicated resource of 1.36 million ounces (6.14 million tonnes at grade 0.69 g/t gold) and an inferred resource of 1.6 million ounces (71.5 million tonnes of 0.69 g/t gold) at US $1300 gold.

During 2020, 18 holes were drilled with assay results still pending for eight holes.  So far the results from the 2020 drilling are continuing to demonstrate that not only is there potential to increase the size of the existing resource but there may be potential to increase the overall grade based on its new interpretation. The company plans to complete a minimum of 40,000 metres of drilling this year to expand the existing resource and potentially increase the grade. The program is currently underway with three drills, with a fourth to begin in the near future.

Meanwhile, exploration at Shorty Creek is at a much earlier phase.

Shorty Creek lies approximately 125 kilometres northwest of Fairbanks and 4.0 kilometres to the south of the abandoned mining town of Livengood. Freegold acquired the project after completing a data review, which suggested that the project may have the potential to host a series of copper-gold-porphyry deposits. Shorty Creek hosts a cluster of magnetic anomalies commonly seen in porphyry districts. Freegold conducted its first drilling in 2015 on the project and the third drill hole of that program returned 0.55% copper over 90 metres. Between 2016 and 2019, drilling was largely focused on the Hill 1835 area which is only one of the potentially significant targets within the property area.

In March, 2019 Freegold granted South32 Limited [SHTLF-OTC; SOUHY-ASX, LSE, Jo’burg]  an option to earn a 70% interest in the Shorty Creek Project by making a commitment of US$30 million exploration expenditure. To keep the option in good standing, South32 must contribute a minimum of US$10 million in exploration funds over a 5 year period.  During 2020, limited work was performed on the Shorty Creek property as a result of the COVID19 pandemic. Under the agreement, South32 can exercise its option to subscribe for 70% of the shares of a newly formed project company by committing US$30 million to the newly formed company, less the amount of exploration expenses it has incurred during the option period following the completion of each annual program.

Freegold maintains the role of operator during the option period.

The Pebble deposit’s rhenium resource represent a significant quantity of the rare metal that is one of 35 critical minerals acknowledged by the US government, and one for which the country is reliant on foreign producers for 82% of its needs. Rhenium is used as an additive to tungsten- and molybdenum-based alloys, in jet engines, X-ray machines and electrical contacts.

With developed nations around the world stating their intention to move towards “green” or electrified economies, and moving away from fossil fuels, the need for copper and silver are expected to increase significantly. An electrified economy does not just mean electric cars, it means increased power generation and transmission to prevent blackouts, all of which will require billions of pounds of additional copper each year. This is coming at a time of declining head grades at many of the world’s leading copper mines. With many economies making this change at the same time, it just exacerbates the supply/demand imbalance.

Northern Dynasty management is fully aware of the need for strict environmental stewardship of the project. As such, the company advanced the environmental science and engineering work necessary to enter the National Environmental Protection Act (NEPA) permitting process in late 2017. The Pebble Project is located on state land designated for mineral exploration and development in the Bristol Bay region. 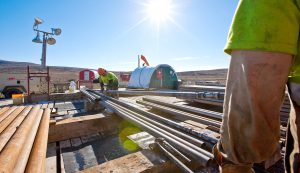 However, the permitting process has been directly affected by the different U.S. administrations. While the project advanced through federal permitting and received a positive Final Environmental Impact Statement during the Trump administration subsequent to the US Federal election, Northern Dynasty received formal notification from the US Army Corps of Engineers that its application for permits under the Clean Water Act and other federal statutes has been denied. The lead federal regulator found Pebble’s ‘compensatory mitigation plan’ as recently submitted to be ‘non-compliant’, and that the project is ‘not in the public interest.

In response, the company has formally submitted a Request for Appeal (RFA) to the US Army Corps of Engineers and submitted its RFA to the USACE’s Pacific Ocean Division Engineer in Hawaii.

In a press release, Northern Dynasty stated that it believes that key aspects of the USACE’s Record of Decision and permitting decision – including its ‘significant degradation’ finding, its ‘public interest review’ findings and its perfunctory rejection of Pebble’s ‘Compensatory Mitigation Plan’ – are contrary to law, unprecedented in Alaska and fundamentally unsupported by the administrative record, including the Pebble Project Environmental Impact Statement.

USACE guidelines indicate the administrative appeal process should conclude within 90 days, although it may be extended under certain circumstances.

Northern Dynasty’s EIS findings state that  “impacts to fish and wildlife would not be expected to impact harvest levels” and “no measurable change in the number of returning salmon” with “no effects on any community groundwater or surface water supplies”. The employment opportunities generated by the Pebble Project could reduce or eliminate the local population decline and associated school closures. The project would create 2,000 high-paying direct and indirect jobs that could mitigate the current high levels of unemployment.

The State of Alaska has also filed a RFA against the decision, citing a lack of precedence for the finding and concerns that it will restrict future mineral development if future projects are held to the same standard. Alaska relies on the economic benefits that development of its mineral resources, in addition to its oil and gas industry, provide.

In addition to its untapped exploration upside and strong, sustainable Native partnerships in southwest Alaska, the Pebble Project has robust economics for over 20 years of mining.

A 2011 Preliminary Economic Assessment prepared by independent consultant Wardrop yielded a 14.2% pre-tax internal rate of return (IRR), a 6.2-year payback on a $4.7 billion capital investment and a $6.1 billion pre-tax Net Present Value (NPV) at a 7% discount rate at long-term metal prices. At prevailing metal prices at that time, the 45-year Reference Case yields a 23.2% pre-tax IRR, a 3.2-year payback of initial capital investment and a $15.7 billion pre-tax NPV at a 7% discount rate.

The proposed development of Pebble for permitting is for an open pit operation with a mining rate of ~70 million tons/year to be processed at a 180,000 ton/day plant. Operations would be facilitated with a 270 MW natural gas fired generating plant, a 82-mile land-based transportation system of roads and pipelines and a permanent, year-round port on Cook Inlet.

The State of Alaska would receive annual state and royalty taxes of US$49 million to US$66 million annually.

With the United States – and the world for that matter – needing more critical minerals for new and green technologies such as electric vehicles that include copper, rhenium and silver, the Pebble Project represents an outstanding opportunity with benefits for the State of Alaska, employment prospects and investors. The recent rising prices of copper and silver and rising demand only serve to boost the already robust economics.

Northern Dynasty Minerals, part of the Hunter Dickinson Group, is headed by Ronald Thiessen, President and CEO. The company has 509,046,631 shares outstanding.