Aton Resources Inc. (AAN: TSX-V) (“Aton” or the “Company”) is pleased to update investors on the latest results from the Phase 2 diamond drilling programme at its advanced Rodruin gold exploration project, which is located in the Company’s 100% owned Abu Marawat Concession (“Abu Marawat” or the “Concession”), in the Eastern Desert of Egypt.

“We are again pleased to be able to report further high grade sulphide mineralisation from Rodruin” said Tonno Vahk, Interim CEO. “This latest gold-polymetallic intersection follows up on the results we reported several weeks ago from hole ROD-071, and has returned even higher grades of both precious and base metals. The mineralisation at Rodruin is clearly unusual and is structurally complex, as we have appreciated since its initial discovery, and our exploration team are working to piece it together. As at the Hamama and Abu Marawat deposits the base metal credits are very significant, and we are assessing various options to see if the copper and zinc may also be viable to recover. Meanwhile we are continuing to push ahead with drilling the nearer surface oxide material, with our efforts focused on the establishment of a maiden mineral resource estimate at Rodruin. The Ministry of Petroleum and EMRA continue to advance the mining and exploration sector in Egypt, and we are delighted to remain at the vanguard of this process, as we work towards our goal of the development of multiple mines on our Abu Marawat Concession.” 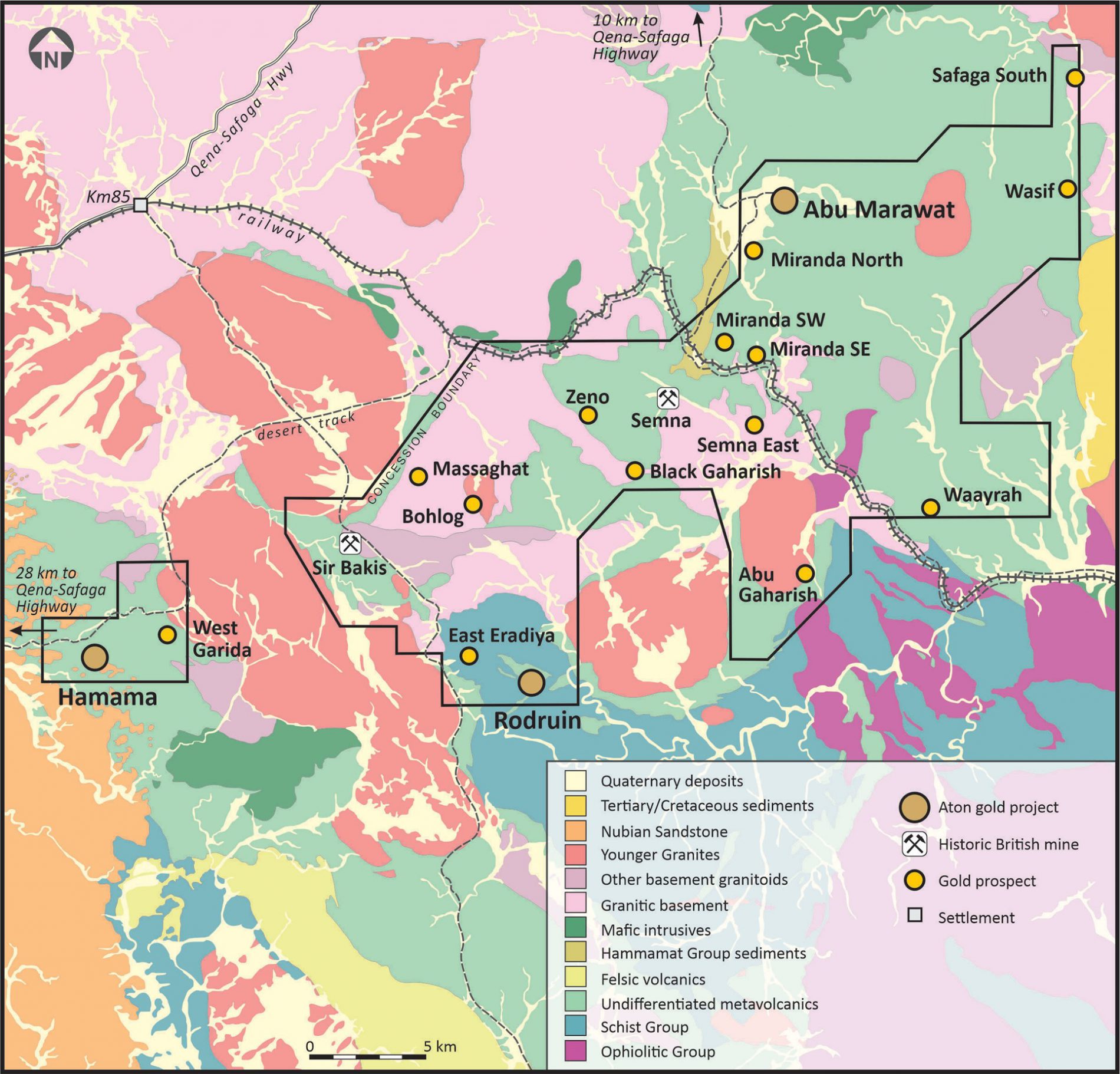 Figure 1: Geology plan of the Abu Marawat Concession showing the location of the Rodruin project

Both holes ROD-074 and ROD-075 were drilled on a northerly azimuth on the 552450E section at Rodruin (Figure 2), and were designed to “scissor” hole ROD-070. The holes were designed and drilled after the visible Cu-Zn sulphide mineralisation had been logged in hole ROD-071, but prior to the receipt of the assay results. Hole ROD-074 was designed to test foliated and strongly quartz-sericite-pyrite (“phyllic”) altered sediments above the South Ridge Thrust (“SRT”). Hole ROD-075 was designed to test below the SRT, and to follow up on the visible Cu-Zn sulphide mineralisation logged in hole ROD-071, associated with strongly silicified and phyllic altered sediments (Figure 3). Collar details of the 2 holes are provided in Table 1. 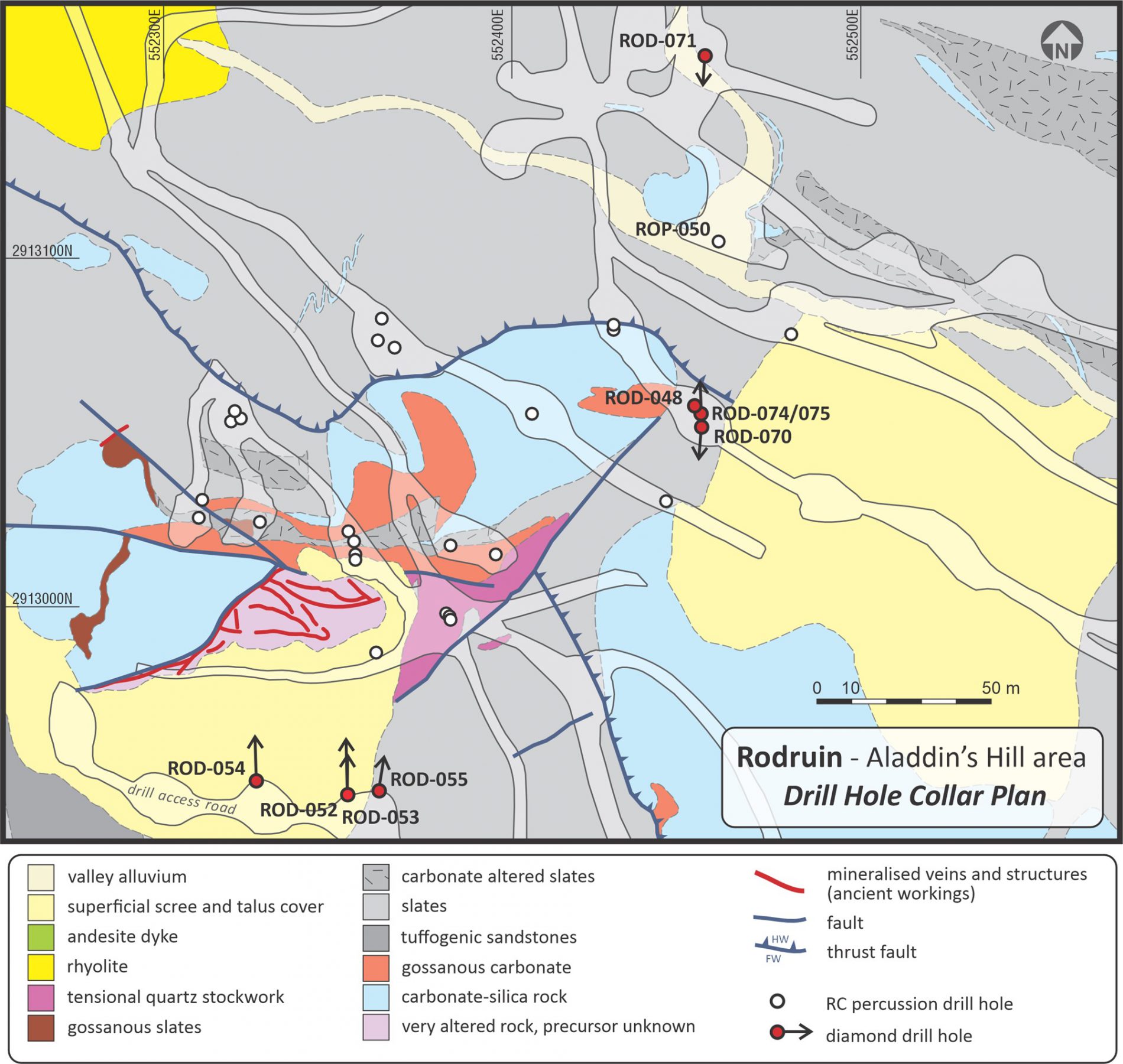 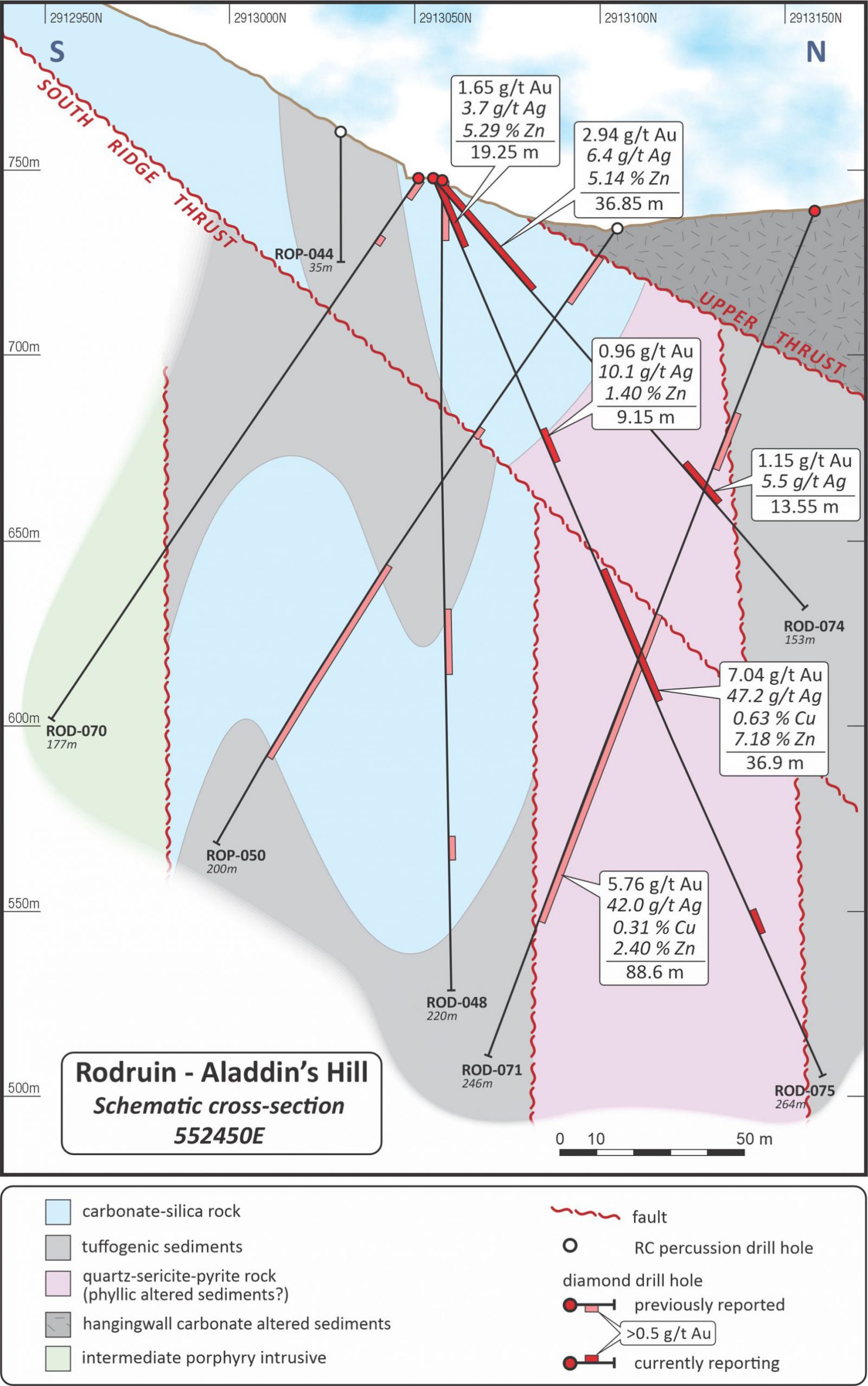 Hole ROD-074 returned an oxide intersection of 36.85m grading 2.94 g/t Au, 6.4 g/t Ag, and 5.14% Zn from surface, associated with sheared and gossanous silica-carbonate host rocks, again indicating the near and surface potential of the oxide mineralisation at Rodruin. Below this surface mineralisation the hole passed into a sequence of heavily sheared and very talc-altered carbonate rocks, before a faulted contact into highly foliated and phyllic altered tuffogenic sediments, which returned a 13.55m intersection grading 1.15 g/t Au and 5.5 g/t Ag, above the SRT. The hole ended in massive chloritic tuffogenic sediments, after passing through another sheared contact with the phyllic altered sediments.

Hole ROD-075 was drilled from the same collar position as ROD-074, and also returned an oxide intersection from surface grading 1.65 g/t Au, 3.7 g/t Ag, and 5.29% Zn over 19.25m, again associated with sheared and gossanous silica-carbonate host rocks. Below the surface mineralisation the hole passed into white dolomitic silica-carbonate rock. The sheared contact between the carbonate and the upper foliated and phyllic altered tuffogenic sediments, returned a 9.15m intersection grading 0.96 g/t Au and 10.1 g/t Ag.

Below the SRT hole ROD-075 passed immediately into a very high grade semi-massive sulphide zone which graded 26.8 g/t Au, 142.4 g/t Ag, 1.25% Cu and 16.8% Zn over 6.9m from 112.1m down hole depth. The mineralisation continued below the semi-massive zone, grading 7.04 g/t Au, 47.2 g/t Ag, 0.63% Cu and 7.18% Zn, over the full 36.9m mineralised interval. All assay results from this intersection are provided in Appendix A. The zinc grades are particularly elevated, with a single 1.15m sample (AHA-38409) returning an assay of 32.9% Zn. This polymetallic mineralisation is associated with a unit of grey to dark grey, highly siliceous, quartz-sericite-sulphide altered rock, similar to that in hole ROD-071. After passing through an apparently structurally controlled zone of replacive carbonate the hole entered a zone of paler grey, foliated and mostly unmineralised but strongly quartz-sericite-sulphide altered rock. The hole was again terminated after passing into green chloritic tuffogenic sediments, again with a structural contact to the strongly phyllic altered sediments above.

Following the completion of drill hole ROD-071 core orientation equipment was ordered, with a view to orientating core going forwards. Core orientation had not been previously carried out due to the drilling having been undertaken entirely on oxidised and very broken near surface material that was not amenable to orientation. Subsequent to the completion of hole ROD-075 the drill rig was moved back to testing near surface oxide mineralisation, pending the arrival of the core orientation equipment onsite and a fuller geological appraisal of the mineralisation intersected in holes ROD-071 and ROD-075.

Drill core was logged by Aton geologists, and marked up for cutting and sampling at the Rodruin core farm. Samples were typically selected over nominal 1m intervals, but as determined by the logged lithologies. The core was half-cut by Aton staff at the onsite Rodruin sample preparation facility.

The split half-core samples were collected and bagged up in cloth bags, weighed and crushed to -4mm onsite, and split to a nominal c. 250-500g sample size. The coarse crushed reject samples are retained onsite at the Rodruin sample prep facility.

The c. 250-500g dried, crushed and split samples were shipped to ALS Minerals sample preparation laboratory at Marsa Alam, Egypt where they were pulverised to a size fraction of better than 85% passing 75 microns. From this pulverised material a further sub-sample was split off with a nominal c. 50g size, which was shipped on to ALS Minerals at Rosia Montana, Romania for analysis.

Aton Resources Inc. (AAN: TSX-V) is focused on its 100% owned Abu Marawat Concession (“Abu Marawat”), located in Egypt’s Arabian-Nubian Shield, approximately 200 km north of Centamin’s world-class Sukari gold mine. Aton has identified numerous gold and base metal exploration targets at Abu Marawat, including the Hamama deposit in the west, the Abu Marawat deposit in the northeast, and the advanced Rodruin exploration prospect in the south of the Concession. Two historic British gold mines are also located on the Concession at Sir Bakis and Semna. Aton has identified several distinct geological trends within Abu Marawat, which display potential for the development of a variety of styles of precious and base metal mineralisation. Abu Marawat is 447.7 km2 in size and is located in an area of excellent infrastructure; a four-lane highway, a 220kV power line, and a water pipeline are in close proximity, as are the international airports at Hurghada and Luxor.

For further information regarding Aton Resources Inc., please visit us at www.atonresources.com or contact: