As exploration and mining companies in northwestern British Columbia’s prolific Golden Triangle region advance their mining projects to the point where orebodies are being delineated, thoughts are turning to the best mining methods to monetize their huge copper, copper-gold and gold-copper-silver deposits.

By its nature, mining is capital intensive so it is crucial to choose a mining method that is suitable for a deposit’s particular geometry and grade that will generate a profit. There are several common mining methods available, including room and pillar, shrinkage stoping, cut and fill, sublevel caving, longwall mining and block caving.

However, it is block caving that offers some real mining cost savings – in the right circumstances – and which is being given increasing consideration.

Basically, block caving is a way to mine large, fairly low-grade ore deposits at depth utilizing gravity. For block caving to work, the orebody needs to have large dimensions in all three directions – width, length and the vertical extent – with a relatively homogenous grade. Block caving is not suitable for vein deposits, although it’s OK to have mineralized veins within a large homogenous mineral deposit.

For block caving, there needs to be considerable initial underground preparation before actual ore extraction can begin that entails substantial upfront capital costs – more about that below. Sometimes block caving is chosen as the best mining method to continue ore extraction below an open pit that has reached its practical depth. Other projects will utilize block caving from the start.

Other favourable conditions include the presence (hopefully) of vertical or steeply-dipping and horizontal joint (fractures) that will naturally aid in the caving, or collapsing, process. You won’t want to build your mill or other buildings above a planned block caving mine as surface subsistence will take place above the underground block caved mine.

Before the bulk extraction of ore can begin, a large section of ore – rather like a huge slice – is undercut by drilling and blasting. This creates a big artificial cavern that collapses under its own weight aided by the fractures. The broken ore falls into a number of funnel-shaped vertical tunnels (raises) and into access, or haulage, tunnels that were constructed earlier that enable front end loaders to scoop up the ore and deliver it to an underground crusher or some kind of transportation to the surface. As one “slice” is mined another can be prepared for block caving and so forth.

With the extensive underground development needed – sometimes tens of kilometres or more – why would a mining company choose block caving? It’s because block caving mining costs are usually only about one-tenth the cost of other underground mining methods. A mine utilizing block caving can produce tens of thousands of tonnes per day with no backfilling costs and less surface waste disposal requirements as well as a much smaller surface footprint compared to an open pit mine.

It can be difficult to visualize the block mining process and Atlas Copco has an excellent 3D animated block caving video:

With more PEAs and feasibility studies recommending block caving mining methods, it’s only logical that this technique would be under consideration for developing the large porphyry deposits in BC’s Golden Triangle.

Newmont Corp.‘s [NGT-TSX; NEM-NYSE] Tatogga project is similar in nature to Red Chris so maybe it will be a block caving development as well.

Teck Resources Limited [TECK.A, TECK.B-TSX; TECK-NYSE], 75% owner and operator, and Copper Fox Metals Inc. [CUU-TSXV; CPFXF-OTC] have established a major copper-gold-molybdenum-silver deposit – the Schaft Creek project – 60 km south of the community of Telegraph Creek. With a capital cost of CAD$3.5 billion, the 21-year open pit mining operation will end in mineralization at the bottom of the pit, so perhaps block caving would be an underground mining option.

Galore Creek Mining Corp., a joint venture between Teck Resources and Newmont Corp. [NGT-TSX; NEM-NYSE], is improving the Galore Creek project economics and advancing the asset towards development. Galore Creek is approximately 150 km northwest of Stewart. This 287-million-tonne copper-gold-silver project, which hosts about a dozen discrete deposits, would be mined at a rate 95,000 tonnes per day. Like other Golden Triangle deposits, good mineralization extends beneath the planned open pit; for example, the Bountiful Zone. Could this be another eventual block caving candidate?

Of note, unlike other Golden Triangle deposits which are copper-dominant, Treaty Creek is gold-dominant. In terms of gold, Treaty Creek is larger than every other Golden Triangle deposit except KSM. A total of 90% of Treaty Creek’s Goldstorm deposit value comes from gold with only 10% from copper and silver. With four known deposits and geophysics indicating total potential resources on a KSM-scale, the current resources are viewed as very expandable.

Treaty Creek drill holes are returning good mineralization down to depths of over 1,200 metres – deeper than any potential open pit mine – so block caving would be a logical consideration.

Newcrest Mining stated (when releasing the positive feasibility study on the block cave for Red Chris in November 2021) that the large deposits in the Golden Triangle are the right type for block cave mining. “The study builds on Newcrest’s experience and success with block cave developments in Australia, with the block cave mining method particularly well suited to the porphyry deposits found at Red Chris and throughout the Golden Triangle region of British Columbia.”

There are a number of other companies in the Golden Triangle with porphyry-style deposits; however, there hasn’t been sufficient drilling to depth to date to determine if they would be block caving candidates.

Block caving is already under consideration for some Golden Triangle porphyry copper-gold deposits, so yes, this mining technique will help unlock the region’s vast mineral treasures; however, the orebodies need to qualify for this mining method to work.

Meanwhile, numerous junior exploration companies are discovering and/or expanding mineralized zones on their Golden Triangle properties, so we can probably expect more block caving candidates to appear in the future. 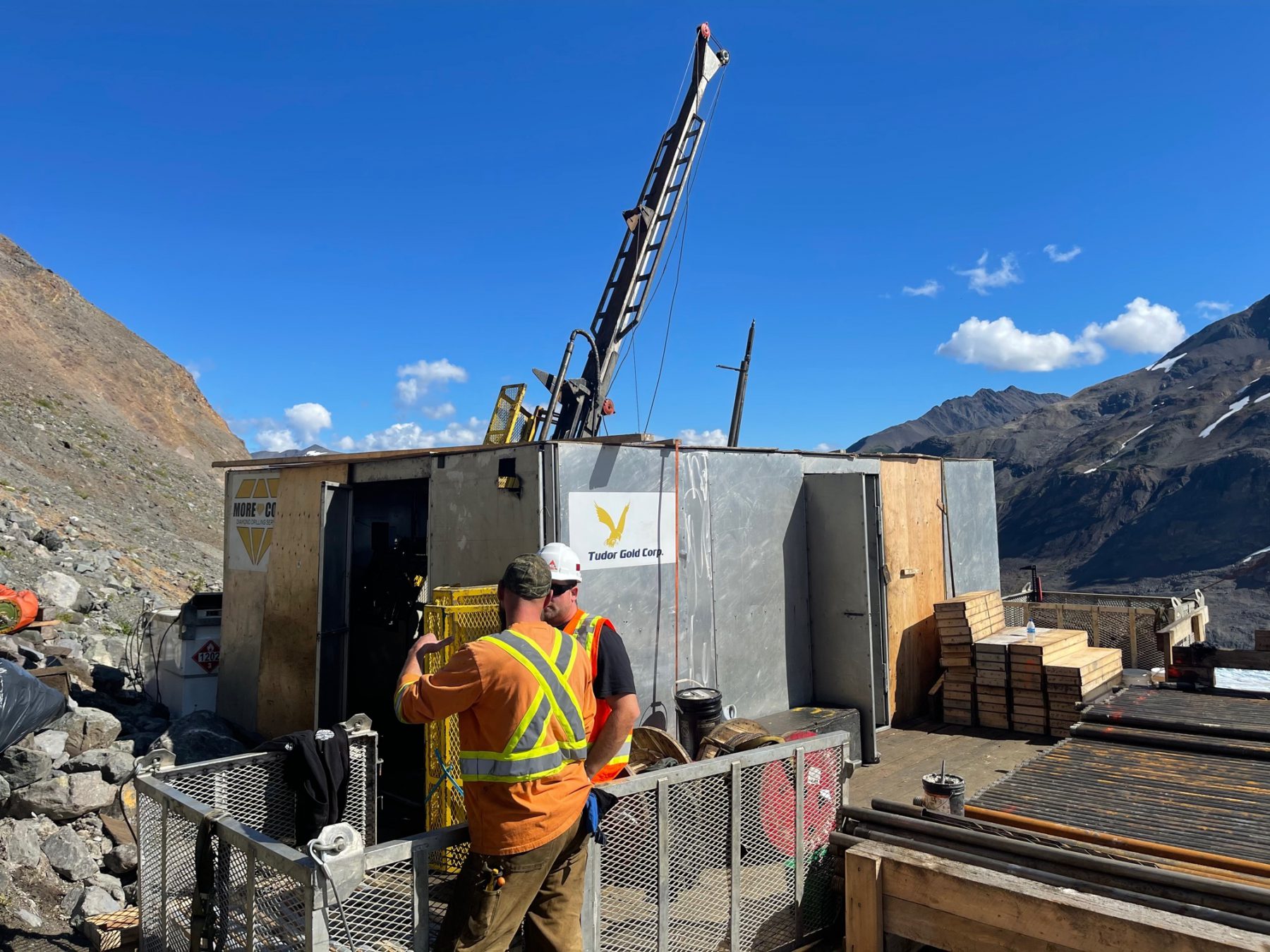 American Creek Resources Ltd. [AMK-TSXV] is a Canadian exploration company with a front-row seat in one of the hottest gold exploration projects in northwestern British Columbia’s Golden Triangle area.Â  A project that has the potential to benefit from block cave mining.

KSM is one of the world’s largest undeveloped gold projects as measured by reserves, containing 38.8 million ounces of gold and 10.2 billion pounds of copper in proven and probable reserves.

Exploration at Treaty Creek is led by Ken Konkin, President and CEO of Tudor Gold Corp. [TUD-TSXV, TUC-Frankfurt], which holds a 60% interest in Treaty Creek and is the project operator. The other 20% is held by Teuton Resources Corp. [TUO-TSXV].

Konkin is best known for his instrumental role in the discovery of Newcrest’s (Pretium Resources) “Valley of Kings” deposit and taking the Brucejack mine into production in 2017. Brucejack is expected to produce between 325,000 and 365,000 ounces of gold this year and was purchased by Newcrest Mining in January, 2022 for $3.5 billion CAD.

If Konkin can repeat his earlier success right next door, it would put American Creek and its joint venture partners in a very favourable position. American Creeks 20% interest is fully carried until a production notice is given.

This view is obviously shared by key investors, including Bay Street financier Eric Sprott, who continues to fund the drilling effort, including a placement in Tudor Gold in November, 2021 and currently holds a significant position in all three companies, including a 17.8% partially diluted stake in American Creek.

The largest gold and copper deposits in the Golden Triangle are hosted by the Sulphurets Hydrothermal System (SHS) and includes the KSM and Brucejack deposits, which are located in the southern half of the geological system.Â  The 17,913 hectare Treaty Creek property covers the northern half of the system, where geology, geophysics, and exploration results show that the known mineralization in the southern half continues north in a rhythmic sequence of massive deposits referred to as “a string of pearlsâ€¦just really big pearls” by Konkin. 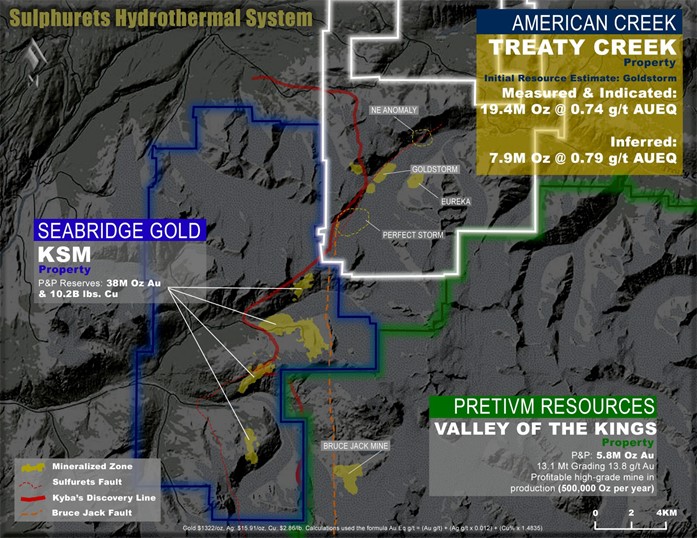 Treaty Creek hosts at least four potential district-scale deposits (pearls), with the focus being on the Goldstorm deposit. A resource calculation announced in March 2021 for the Goldstorm zone contained *19.4 million ounces of 0.74 g/t gold equivalent (AuEq) in the Measured & Indicated resource category as well as 7.9 million ounces of 0.79 g/t AuEq of inferred resources (open in all directions) making it one of the largest gold discoveries in the last 30 years.

Tudor Gold worked on converting the 7.9 million ounces of inferred to M&I and significantly expanding the Goldstorm through a 30,000m program in 2021.Â  Even though Goldstorm’s edges were not discovered, the program was so successful that Konkin has stated:

“It’s absolutely mind-boggling what the potential is”

Two distinct features of the Goldstorm deposit are its gold enriched zone in the first 300+ meters from surface and its great depth.Â  It, along with other zones at Treaty, are part of the SHS which has incredibly deep roots (this is why KSM plans on using block caving).Â  As an example hole GS-21-113-W2 returned 0.97g/t AuEq over 1,320m including an intercept ofÂ 1.38 g/t AuEq (including 0.49%Cu and 6.27 g/t Ag) over 556.5m,Â and contains higher grade mineralizationÂ averaging 2.34 g/t AuEq (including 0.71 % Cu and 17.64 g/t Ag) over the last 57.0m of the hole.Â The drillers had to abandon the holeÂ at 1,575.0 m, as theÂ drill was at its maximum limit. This is only one of numerous deep holes ending in mineralization.

The richly endowed 300 horizon near surface is advantageous for open pit mining and the depth of the system is advantageous for block cave mining.Â  Newcrest has told Tudor “the deeper the better with these sub-level block caves”. Drilling at the Calm Before The Storm, Eureka, and Perfectstorm zones has only just begun with geophysics showing potential deep roots as well.

American Creek puts a lot of confidence in the man who put the Brucejack mine into production just a few kilometers away when he says “our best targets, by the way, have yet to be drilled at Goldstorm” and “Goldstorm will be a mine, in my opinion”. 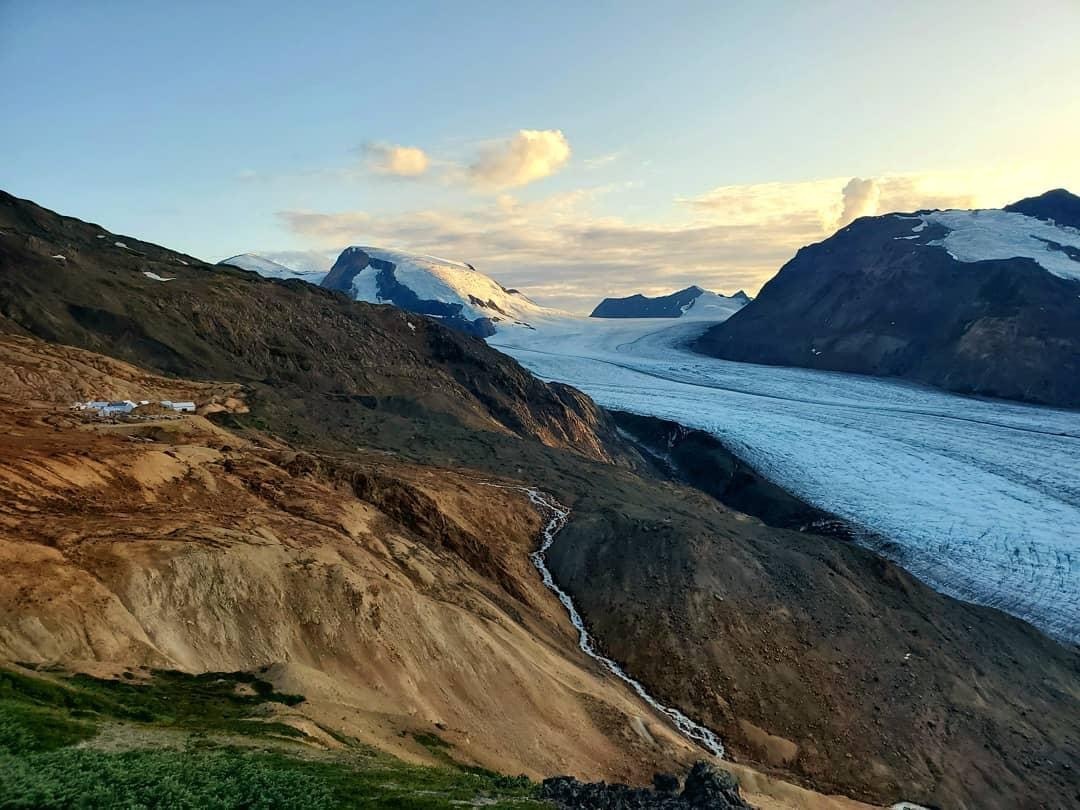 American Creek offers investors a low-cost entry to the Treaty Creek story as its share of the M&I resource is currently being valued close to $20/oz gold equivalent. In comparison, the operators’ share is valued close to $37/oz gold equivalent for the same ounces in the ground.Â  This represents a 46% discount for the identical resources giving investors a greater leverage on the play.Â  In addition, American Creek will incur no development costs (dilution) for Treaty Creek, if the project is sold prior to a notice of production being given.

With a significant 2022 program scheduled, Treaty Creek is poised to be one of the biggest gold discoveries in decades and American Creek is in a position to get the greatest leverage from it.