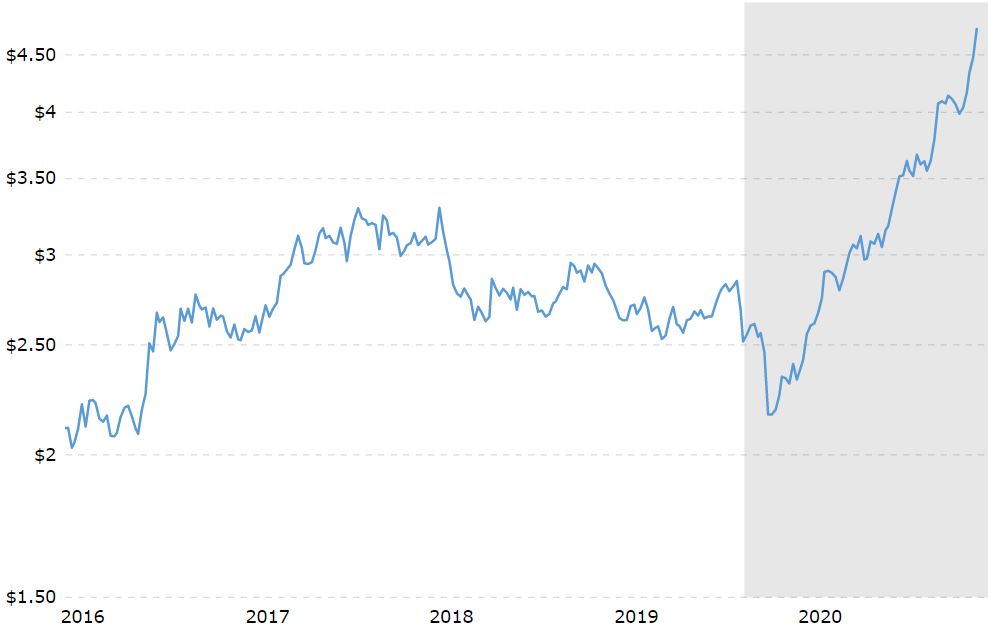 Whether you are an explorer, miner or investor, the copper space is a good place to be. The robust price of about US$4.50/lb is encouraging for explorers, at a profitable level for miners and an opportunity for capital gains for investors.

It has taken a while, but there is growing demand for electric vehicles as range anxiety is subsiding and more affordable models become available. With these circumstances, copper production is expected to increase as electric vehicles require two to four times more copper than gasoline or diesel vehicles.

As far as copper exports are concerned, Canada’s total exports of copper were valued at $7.0 billion in 2019. Canada’s total trade (exports and imports) in copper and copper-based products inÂ 2019 was valued at $10.6Â billion.

Chile was the world leader in copper production from mines in 2019 with 5.6 million tonnes of copper or 28% of the global total.

In 2020, the United States produced some 1.2 million tonnes of copper from mining operations.

The Mining Association of Canada stated that while 2020 saw a modest increase in the value of mining projects planned and under construction from 2020 to 2030 (by $2 billion year-over-year), the total 10-year projected value ($82 billion) remains nearly 50% below the 2014 level of $160 billion.

Canada continued to lose ground to Australia in the competition for the world’s top destination for non-ferrous exploration spending in 2019, accounting for 13% of total global expenditures in 2019. Capital spending in the sector is projected to account for 4.9% of Canada’s total at $11.9 billion, also down year-over-year.

In addition to new copper being mined, copper recycling is an important component as the red metal does not degrade or lose its chemical and physical properties during the recycling process. The International Copper Study Group estimated that 33% of the world’s copper consumption came from recycled copper inÂ 2017.

Canada maintains a strong copper recycling industry. Substantial amounts of the metal are recovered in the Quebec-based smelter and refinery located in Rouyn-Noranda and Montreal, Quebec, respectively.

Fitch analysts predict globalÂ copper mine productionÂ to increase by an average annual rate of 3.1% overÂ 2020-2029, with total output rising from 20.3 to 26.8 million tonnes over the same period.

The company recently struck a deal to acquire a 100% interest over four years (2% NSR) in the 16 km2 Mostazal copper property by paying US$5 million and spending US$ 5 million on exploration.

The Mostazal property is located in the Atacama region of Chile, an area that ranks among the richest copper regions on earth, hosting some of the world’s most significant porphyry copper deposits. The property is situated within the 500-kilometre-long, north-south trending Domeyko Fault System, the major structural control for the majority of Chile’s largest copper mines including Escondida (BHP, Rio Tinto), Chuquicamata and the 900-million tonne El Salvador mine (Codelco) grading 0.59% copper. 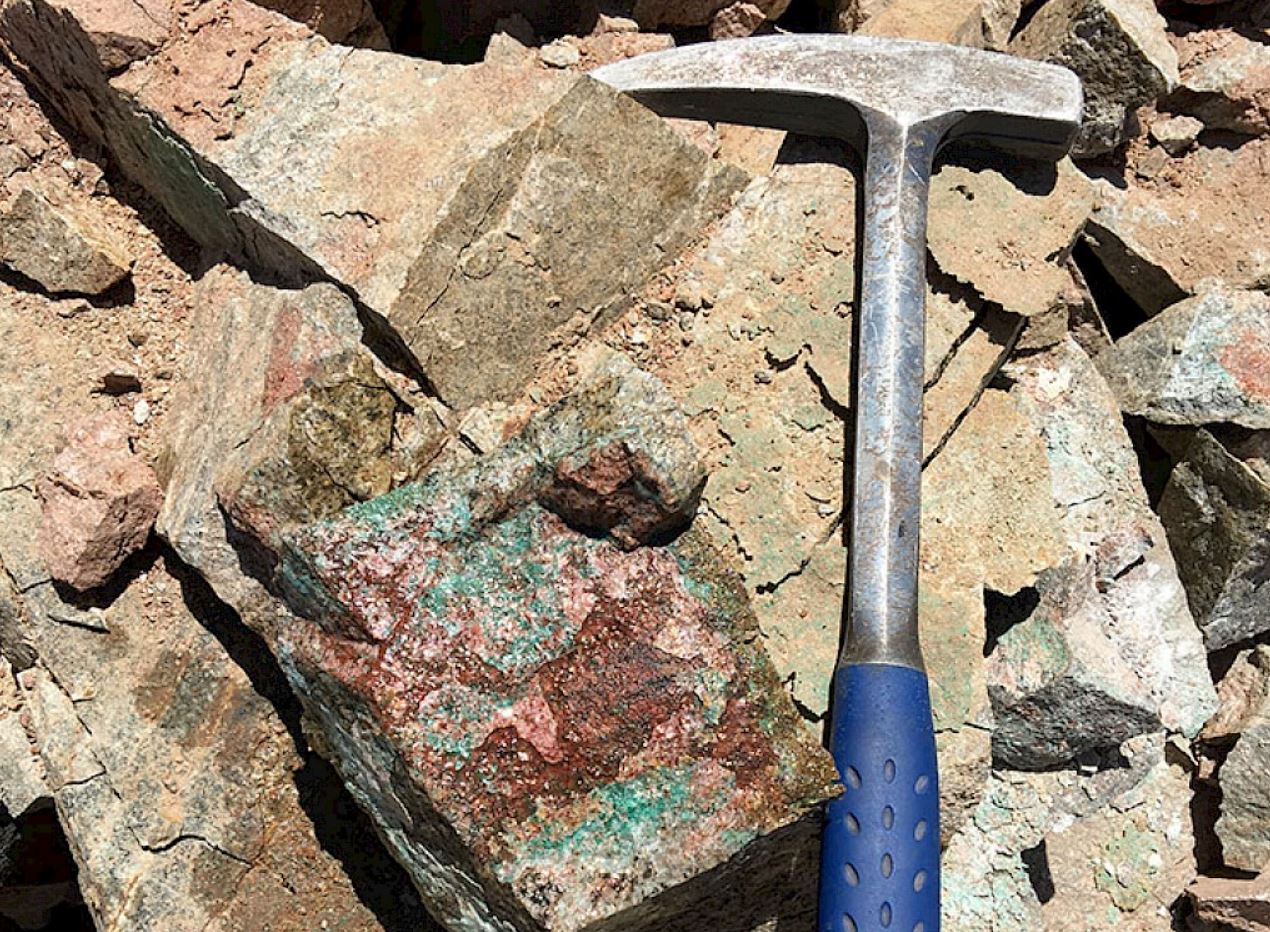 “We set out to secure an asset that was both transformative to the company and complimentary to our current portfolio and I believe we’ve achieved this,” said Jason Cubitt, Westminster’s President and CEO. “It’s rare to find a property in this jurisdiction with a technical feature set that so clearly describes a copper porphyry target – yet remains untested by drilling. And with the potential to resume and expand upon historic production this was indeed an opportunity we couldn’t turn down.”

The property contains several historical artisanal workings that were developed to exploit near-surface high-grade copper mineralization. It hosts a historical indicated resource of 10 million tonnes grading 0.95% copper and 8.0 g/t silver. That estimate, which does not comply with current NI 43-101 levels of disclosure, is based on results of 60 diamond drill holes (11,380 metres) at a cut-off grade of 0.5% copper that focused only on the near-surface mantos-style mineralization. This area represents 10% of copper mineralization exposure.

The reported historic production of 120,000 tons was processed with an average grade of 1.8% copper. However, the company is principally focused on drill testing the interpreted, and potentially much larger, porphyry system underlying this high-grade mantos-style copper mineralization near surface. Preliminary interpretation of geophysical data indicate that much of the known mineralization at surface is closely correlated to four deep-rooted magnetic anomalies. Significant copper mineralization encompasses an area of 15km2 where there are untested geochemical anomalies that correlate to a classic IP/Magnetics geophysical porphyry signature. Drilling is planned this year at Mostazal.

Angelo Peri, former country manager for Sumitomo in Chile, was recently named as country manager for Westminster’s Chilean operations and will be responsible for co-ordinating the due diligence program at Mostazal. The company is collecting and analyzing all available data, which will be integrated into developing a new exploration model on the property.

Westminster’s asset portfolio also includes a 100% interest in a package of highly prospective copper properties in southern Peru. These Peruvian properties comprise 11,600 hectares within the country’s prolific coastal copper belt, the source of nearly half of Peru’s copper production.

Ilo Este is a copper-gold porphyry just east of the Ilo smelter/refinery with mineralization mapped over 3km2. Rio Tinto Plc [RIO-NYSE] undertook mapping sampling and a small amount of reverse circulation drilling at Ilo Este in 2000.

Westminster’s management team has many years’ experience in the resource sector and financial markets as well as in exploration and development operations.

The company is closing a recently announced a non-brokered private placement of 13.75 million units for proceeds of $2.75 million ($540,000 from Latin Resources and commitments of $600,000 from existing shareholders).

Golden Arrow Resources Corp. [GRG-TSXV; GARWF-OTCQB; G6A-FSE] is a mining exploration company with a successful track record of creating value by making precious and base metal discoveries and advancing them towards excellence.

The company is actively exploring a portfolio that includes a new epithermal gold project in Argentina, a district-scale frontier gold opportunity in Paraguay, a base metal project in the heart of a leading mining district in Chile and more than 180,000 hectares of properties in Argentina. 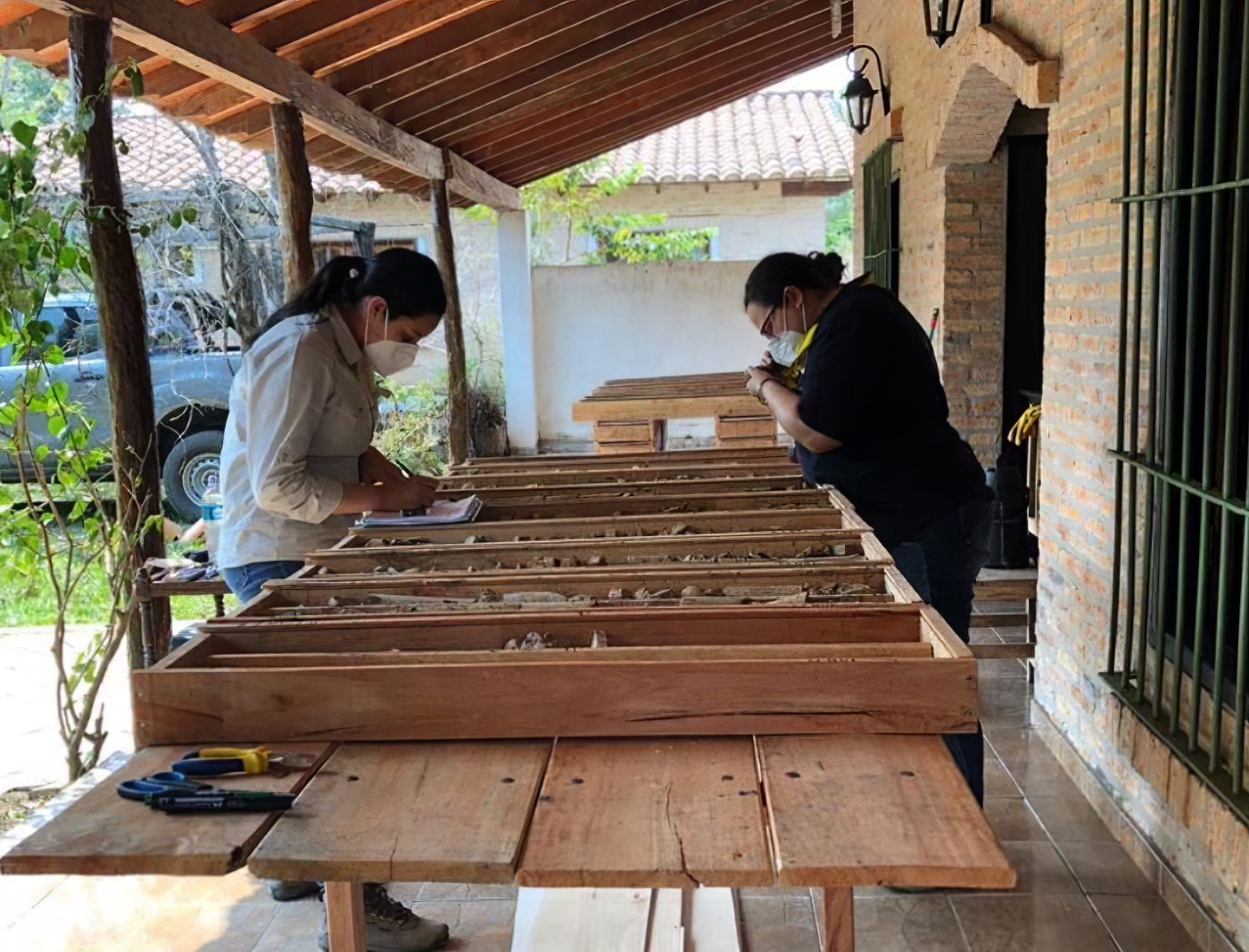 Golden Arrow is well leveraged to the price of gold after monetizing its Chinchillas silver discovery in Argentina by selling it in exchange for a significant holding in precious metals producer SSR Mining Inc. [SSRM-TSX, NASDAQ].

Golden Arrow’s exploration and development strategy is led by a highly experienced management team that includes Executive Chairman, CEO and President Joe Grosso, who has been active in Argentina since the country opened its mining sector to foreign investment in 1993.

In 2021, Golden Arrow will continue to explore its strategically located portfolio that includes the Flecha de Oro gold project in Argentina; the district-scale Tierra Dorada gold project in Paraguay and the Rosales copper project in Chile.

Golden Arrow recently reported a high-grade drill result at Tierra Dorada, highlighted by an intercept at the Alvaro target of 143.5 g/t gold over 0.5 metres within 6.0 metres averaging 14.53 g/t gold at 3.0 to 9.0 metres depth.

Shallow drilling and the recent first induced polarization (IP) geophysical program are helping to delineate targets at Tierra Dorada, which covers 64,000 hectares. Golden Arrow is planning to complete up to 2,000 metres of drilling this year.

Meanwhile, a trenching program is continuing on the Esperanza target at Flecha de Oro, where Golden Arrow has found high-grade and visible gold in surface sampling of vein corridors.

Golden Arrow recently optioned its Caballos copper-gold project to Hanaq Argentina S.A., an exploration company with a portfolio of mineral projects throughout Argentina. Under the deal, Hanaq can earn a 70% stake in Caballos by spending US$4 million on exploration over six years.

The Caballos Project covers over 12,000 hectares along the Chilean border in the Andean Cordillera of La Rioja Province.Â  An initial multi-discipline exploration program led to the discovery of a copper-gold porphyry target, including a magnetic core, measuring 300 metres by 800 metres.

Outcrop sampling on the margin of the magnetic core zone encountered 12 metres averaging 2.4% copper within an 18-metre continuous chip sample.

Following completion of the earn-in, a joint venture company comprised of Hanaq and Golden Arrow’s Desarrollo de Recursos S.A. unit will advance the project on a pro rata basis with provisions for dilution.

“Caballos is one of several copper-focused projects within our more than 189,000-hectare portfolio in Argentina that has demonstrated potential from preliminary geological work,” Grosso said. “With the recent strength in the copper market, we have redoubled our efforts to secure qualified and committed partners such as Hanaq to advance these exploration projects,” he said. “This allows us to build value at those properties while freeing our team to concentrate on our core-focus precious metal projects in Argentina and Paraguay and on copper assets that we believe we can advance faster and more efficiently, such as our Rosales coper project in Chile.”

The 100%-owned Rosales copper project is located less than 90 kilometres from the mining centre of Copiapo in Region 111, Chile.Â  The area is an established mining region, with multiple copper and gold mining projects nearby, including the Margarita Mine, an underground copper mining operation which lies adjacent to the Rosales properties.

Golden Arrow’s first phase exploration program is under way at Rosales, and a new detailed geophysical survey is being commissioned to map structures related to the mineralization and aid in the delineation of drill targets.

In addition to the Caballos Project, Golden Arrow has an Argentina copper portfolio that includes multiple projects in geologic districts that host world-class copper and gold deposits.

They include the Mogote Project, which lies adjacent to the Filo del Sol gold property owned by Filo Mining, and the Don Bosco, which has several copper, gold and silver targets. Don Bosco is located in the same sedimentary belt as the Gualcamayo gold mine, owned by Mineros S.A.