Denison Mines Corp. (“Denison” or the “Company”) (DML: TSX, DNN: NYSE American) is pleased to report the results from the 2020 exploration and expansion drilling program focused on the area proximal to the high-grade Phoenix uranium deposit (“Phoenix”) at the Company’s 90% owned Wheeler River Uranium Project (“Wheeler River”). During the program, 19 drill holes were completed for a total of approximately 7,400 metres – all of which were located outside of the extents of the mineral resources currently defined at Phoenix.Â  The results from the program were highlighted by the intersection of high-grade uranium mineralization in Zone C, where no mineral resource is currently estimated:

The mineralization in WR-328D1 and WR-767D1 represent the best mineralized intersections returned to date from exploration drilling at Phoenix Zone C.

Andy Yackulic, P. Geo., Denison’s Director, Exploration, commented, “The grades and thicknesses of the mineralized intersections from the 2020 Phoenix Zone C drilling represent a significant upgrade compared to historical drilling at Zone C. With each successive hole at Zone C, Denison’s exploration team becomes more optimistic about the prospect of delineating an additional mineralized zone that could potentially be incorporated into future development plans for the Phoenix In-situ recovery (“ISR”) operation.”

This press release constitutes a “designated news release” for the purposes of the Company’s prospectus supplement dated November 13, 2020 to its short form base shelf prospectus dated June 2, 2020.

Zone C is the southwestern-most mineralized zone at Phoenix (see Figure 1). Prior to the 2020 drilling program, Zone C was defined over a strike length of approximately 250 metres by only five mineralized intersections. Â Historic exploration drilling at Phoenix was largely focused on the delineation of Zone A and Zone B.Â  As a result of the lack of historical drilling at Zone C, no resource estimate exists for the mineralization previously identified at Zone C.

The 2020 drilling program was designed to test the continuity and extents of known mineralization at Zone C. Eleven drill holes were completed at Zone C in 2020 for a total of 4,600 metres. Three of these drill holes returned uranium mineralization, successfully extending the mineralized zone’s strike length by approximately 20 metres to the southwest and delineating a potential high-grade mineralized “core.” Mineralized intersections from 2020 drilling at Zone C are outlined in Table 1 and illustrated in Figure 2.

With Denison’s recent decision to adopt a freeze wall design and phased mining approach, as part of the ISR mining operation planned for the Phoenix deposit (See Denison’s news release from December 1, 2020), it is possible that further exploration could result in the delineation of a mineral resource that could become a future mining “phase” at Phoenix.Â  Additional drilling will be required to determine the extent of uranium mineralization at Zone C.

Phoenix Zone A and Zone B

Eight diamond drill holes totalling 3,796.0 m were completed to test the extents of known mineralization at Zones A and B.Â  While several drill holes intersected weak uranium mineralization, the only notable potential extension of existing mineralization was reported in drill hole WR-765D1 in Zone B – which intersected 0.36% U3O8 over 3.5 metres (from 401.3 to 404.8 metres), drilled at an azimuth of 332.3Â° and an inclination of -79.6Â°, approximately 15 metres east of WR-333 (which previously intersected 14.6% U3O8 over 6.0 metres).

Drill core with anomalous total gamma radioactivity (>300 counts per second using an RS-120 or RS-125 scintillometer) was sampled over 0.5 metre intervals. Sampling is undertaken on site by splitting the core in half, with one half submitted for analysis and the other half retained in the core box for future reference. Uranium chemical assays are performed by the Saskatchewan Research Council (“SRC”) Geoanalytical Laboratories located in Saskatoon. Sample preparation involves crushing and pulverizing core samples to 90% passing -106 microns. Splits of the resultant pulps are initially submitted for multi-element ICP-MS analysis following partial (HNO3:HCl) and total (HF:HNO3:HClO4) digestions.Â  Samples with â‰¥ 1,000 ppm U (partial digest) are re-assayed for U3O8 using an ISO/IEC 17025:2005 accredited method for the determination of U3O8 weight percentage. Pulp splits are digested using aqua-regia, and the solution analyzed for U3O8 weight percentage using ICP-OES. In addition to internal checks by SRC Geoanalytical Laboratories, the Company has rigorous quality assurance and quality control (“QAQC”) procedures, including the insertion of standard reference materials, blanks and field duplicates. The assay data is subject to verification procedures by qualified persons employed by Denison prior to disclosure. For further details on the assay, QAQC and data verification procedures, please see Denison’s Annual Information Form dated March 13, 2020, filed under the Company’s profile on SEDAR (www.sedar.com).

The Wheeler River Pre-Feasibility Study (“PFS”) was completed in late 2018, considering the potential economic merit of developing the Phoenix deposit as an ISR operation and the Gryphon deposit as a conventional underground mining operation.Â  Taken together, the project is estimated to have mine production of 109.4 million pounds U3O8 over a 14-year mine life, with a base case pre-tax NPV of $1.31 billion (8% discount rate), Internal Rate of Return (“IRR”) of 38.7%, and initial pre-production capital expenditures of $322.5 million. The Phoenix ISR operation is estimated to have a stand-alone base case pre-tax NPV of $930.4 million (8% discount rate), IRR of 43.3%, initial pre-production capital expenditures of $322.5 million, and industry leading average operating costs of US$3.33/lb U3O8.Â  The PFS is prepared on a project (100% ownership) and pre-tax basis, as each of the partners to the Wheeler River Joint Venture are subject to different tax and other obligations.

Further details regarding the PFS, including additional scientific and technical information, as well as after-tax results attributable to Denison’s ownership interest, are described in greater detail in the NI 43-101 Technical Report titled “Pre-feasibility Study for the Wheeler River Uranium Project, Saskatchewan, Canada” dated October 30, 2018 with an effective date of September 24, 2018.Â  A copy of this report is available on Denison’s website and under its profile on SEDAR at www.sedar.com and on EDGAR at www.sec.gov/edgar.shtml.

Denison suspended certain activities at Wheeler River during 2020, including the EA process, which is on the critical path to achieving the project development schedule outlined in the PFS.Â  While the EA process has resumed, the Company is not currently able to estimate the impact to the project development schedule outlined in the PFS, and users are cautioned against relying on the estimates provided therein regarding the start of pre-production activities in 2021 and first production in 2024.

Denison is a uranium exploration and development company with interests focused in the Athabasca Basin region of northern Saskatchewan, Canada. In addition to the Wheeler River project, Denison’s Athabasca Basin exploration portfolio consists of numerous projects covering over 250,000 hectares. Denison’s interests in the Athabasca Basin also include a 22.5% ownership interest in the McClean Lake joint venture (“MLJV”), which includes several uranium deposits and the McClean Lake uranium mill, which is currently processing ore from the Cigar Lake mine under a toll milling agreement, plus a 25.17% interest in the Midwest and Midwest A deposits, and a 66.90% interest in the Tthe Heldeth TuÌeÌ (“THT,” formerly J Zone) and Huskie deposits on the Waterbury Lake property. Each of Midwest, Midwest A, THT and Huskie are located within 20 kilometres of the McClean Lake mill.Â

Denison is engaged in mine decommissioning and environmental services through its Closed Mines group (formerly Denison Environmental Services), which manages Denison’s Elliot Lake reclamation projects and provides post-closure mine care and maintenance services to a variety of industry and government clients.

Denison is also the manager of Uranium Participation Corp., a publicly traded company which invests in uranium oxide and uranium hexafluoride.

The technical information contained in this release has been reviewed and approved by Mr. Andrew Yackulic, P. Geo., Denison’s Director, Exploration, who is a Qualified Person in accordance with the requirements of NI 43-101.

Certain information contained in this news release constitutes â€˜forward-looking information’, within the meaning of the applicable United States and Canadian legislation concerning the business, operations and financial performance and condition of Denison. Generally, these forward-looking statements can be identified by the use of forward-looking terminology such as â€˜plans’, â€˜expects’, â€˜budget’, â€˜scheduled’, â€˜estimates’, â€˜forecasts’, â€˜intends’, â€˜anticipates’, or â€˜believes’, or the negatives and/or variations of such words and phrases, or state that certain actions, events or results â€˜may’, â€˜could’, â€˜would’, â€˜might’ or â€˜will be taken’, â€˜occur’, â€˜be achieved’ or â€˜has the potential to’.

In particular, this news release contains forward-looking information pertaining: the interpretation of the results from the 2020 Phoenix exploration program, underlying assumptions and the Company’s intentions with respect thereto; the results of the PFS and expectations with respect thereto, including the duration and scope of impacts of the COVID-19 pandemic and affiliated operational adjustments; development and expansion plans and objectives, including plans future mining phases for the project described in the PFS; and expectations regarding its joint venture ownership interests and the continuity of its agreements with its partners.

Forward looking statements are based on the opinions and estimates of management as of the date such statements are made, and they are subject to known and unknown risks, uncertainties and other factors that may cause the actual results, level of activity, performance or achievements of Denison to be materially different from those expressed or implied by such forward-looking statements. For example, areas of interest for further exploration selected based on interpretation of current and historic exploration may not result in findings of significance after further testing. Â Denison believes that the expectations reflected in this forward-looking information are reasonable but no assurance can be given that these expectations will prove to be accurate and results may differ materially from those anticipated in this forward-looking information. For a discussion in respect of risks and other factors that could influence forward-looking events, please refer to the factors discussed in Denison’s Annual Information Form dated March 13, 2020 or subsequent quarterly financial reports under the heading â€˜Risk Factors’. These factors are not, and should not be construed as being exhaustive.

Cautionary Note to United States Investors Concerning Estimates of Mineral Resources and Mineral Reserves:Â  This press release may use terms such as “measured”, “indicated” and/or “inferred” mineral resources and “proven” or “probable” mineral reserves, which are terms defined with reference to the guidelines set out in the Canadian Institute of Mining, Metallurgy and Petroleum (“CIM”) CIM Definition Standards on Mineral Resources and Mineral Reserves (“CIM Standards”).Â  The Company’s descriptions of its projects using CIM Standards may not be comparable to similar information made public by U.S. companies subject to the reporting and disclosure requirements under the United States federal securities laws and the rules and regulations thereunder. 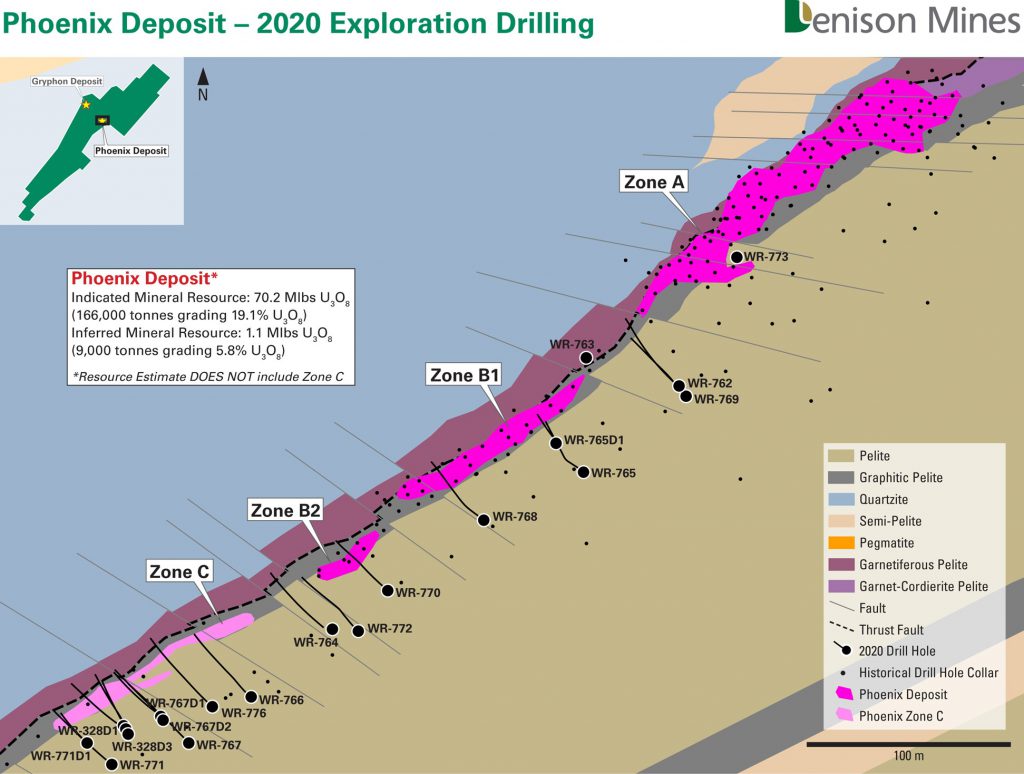 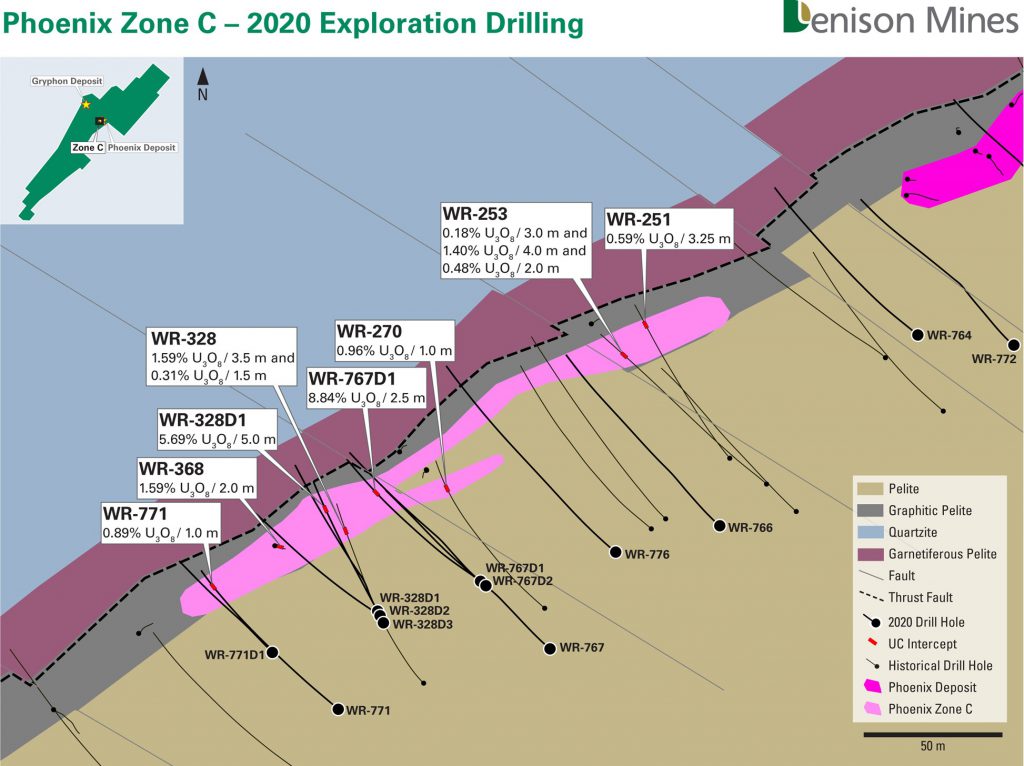