The Grosso Group is the management company for Golden Arrow Resources Corp. [GRG-TSXV; GARWF-OTCQB; GAC-FSE]. Founded in 1993, it is recognized as an early mover in mineral exploration in Argentina. The discovery of three multi-million ounce precious metal deposits and partnerships with industry majors such as Barrick, Viceroy/Yamana, Teck and Rio Tinto makes it clear Argentina has been a great mining destination for the company.

Joseph Grosso, CEO and President, became one of the early pioneers of the Argentine mining sector when mining was opened to foreign investment and has received Argentina’s “Mining Man of The Year” award. He commissioned a study by Argentina’s top geologists and realized the country had limited mining but an abundance of untapped resources. Mr. Grosso has been involved in four major discoveries, two of which are in production.

Management’s long tenure and positive track-record of community and government relations has led to a portfolio of projects in Argentina with properties covering over 180,000 hectares. Many projects are near major mines and within well-known mining districts. Golden Arrow is maximizing its value for shareholders by exploring some of these projects, while maintaining others as joint venture opportunities.

The company is well-leveraged to the price of precious metals, having recently monetized its Chinchillas silver discovery into a significant equity interest in SSR Mining, a precious metals producer. 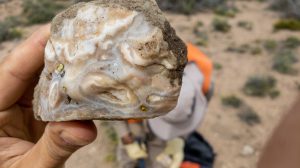 “The Flecha de Oro exploration program is advancing with the addition of a new high-grade gold target at the Esperanza property, located more than 1.5 kilometres north of the high-grade samples reported in March.

Golden Arrow has expanded exploration into neighbouring Paraguay which has a small mining sector with strong geological potential. Paraguay is open for foreign investment with legislation that protects investments. Golden Arrow is exploring its Tierra Dorado Au prospect, a district-scale high-grade gold project.

Golden Arrow’s technical team has a keen interest in Chile as a mature mining jurisdiction that offers undervalued projects with excellent upside, low development costs and reasonable acquisition and transaction fees. The team has reviewed dozens of precious and base metal projects for further evaluation. With copper prices rising, the Rosales Project has emerged as an excellent candidate with the opportunity for both high-grade copper and other metals. Chile, the world’s leading copper producer, hosts high quality, plentiful resources and has a stable legal framework with opportunities for foreign investment.

Golden Arrow’s geological expertise includes VP of Exploration Brian McEwen with more than 30 years of exploration and production experience in open-pit and underground mining projects and operations. His previous roles include over a decade with MRDI (AMEC Peru) and various precious and base metal companies worldwide, including BHP Billiton, CM Antamina, Teck, Hochschild and Phelps Dodge.

Dr. David Terry has over 20 years of exploration experience for precious and base metal deposits throughout North and South America. He has held numerous senior positions with major and junior mining companies, including Boliden, Westmin, Â Hemlo, Cominco and Gold Fields.

Dr. Gammon has 40 years of experience in exploration and management, including international positions with Falconbridge and as Assistant Deputy Minister Mines and Minerals with the Government of Ontario.

Alf Hills has over 35 years of international mine evaluation, development and operational experience. From 2006 to 2013, he was CEO of Kobex Minerals and predecessor company, International Barytex. Prior to that, he spent 26 years with Placer Dome. He was involved in the development of the CIM Best Practice Guidelines for Mineral Resource and Mineral Reserve Estimates.

Golden Arrow is actively exploring a property portfolio that includes a new epithermal gold project in Argentina, a district-scale frontier gold opportunity in Paraguay, a base-metal project in the heart of a leading mining district in Chile and over 180,000 hectares of properties in Argentina. The goal is make new discoveries, advance them to the production stage, and sell the properties.