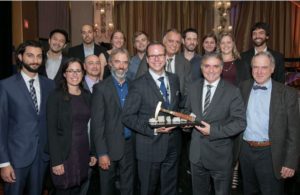 Sirios Resources Inc. [SOI-TSXV] has received the prestigious Discovery of the Year Award during the recent Xplor 2016 Convention hosted by the Quebec Mineral Exploration Association (QMEA).

This year, the QMEA chose to underline the importance of the gold mineralization discovered by Sirios on its Cheechoo property, a discovery which has brought new life to exploration activities in the Eleonore mine area in Eeyou Istchee James Bay.

Dominique Doucet, President of Sirios, wishes to express his thanks to the QMEA, to Sirios’ directors, shareholders and employees, as well as to all the enterprises who contributed to the project.

These first drill holes extend toward southeast zones already identified in the tonalite. Note that the complete extension of drill hole No. 25, down to a depth of 349 metres, yielded a weighted average grade of 1.2 g/t gold over 160 metres.

A detailed geological mapping was undertaken on the area of rock unearthed by mechanical stripping completed in September. Almost 900 metres of channels have been sampled on the stripping site. Channels samples will be sent this week for analysis. Finally, the geological soil survey (humus) was completed recently; approximately 2,580 samples were collected and will be prepared for analysis in upcoming weeks.