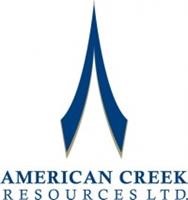 British Columbia’s Golden Triangle mining region…rugged, rocky, remote. But the word remote is relative. 25 years ago, this resource-rich area tucked in the northwestern corner of the province had limited transportation access, an unreliable communications system, and little infrastructure. Thus, for most mining companies, exploring and developing mining operations was cost prohibitive.

But times have changed. As reported on Stockhouse back in October 2018, the Golden Triangle has indeed become a bright spot in gold exploration with new road and power infrastructure built by the BC government that includes:

As its name implies, BC’s prolific Golden Triangle has hosted many past producing gold mines, with several more in various stages of being brought into production. Now, one company in particular brings significant experience at the development and managerial level in the region, with an exceptional portfolio to boot.

That company is American Creek Resources Ltd. (AMK ) (TSX-V.AMK, OTCMKTS: ACKRF, Forum) – a well-positioned precious metals exploration company with high quality assets in significant mineral belts of BC, including three properties in the aforementioned Golden Triangle. A potential world class deposit is currently being developed at the Treaty Creek JV Project with Tudor Gold (TSX-V.TUD) located adjacent to Seabridge Gold and Pretium. In addition, the 100% owned past producing high-grade Dunwell Mine has shown indications of a substantial additional ore body beneath the historic workings. 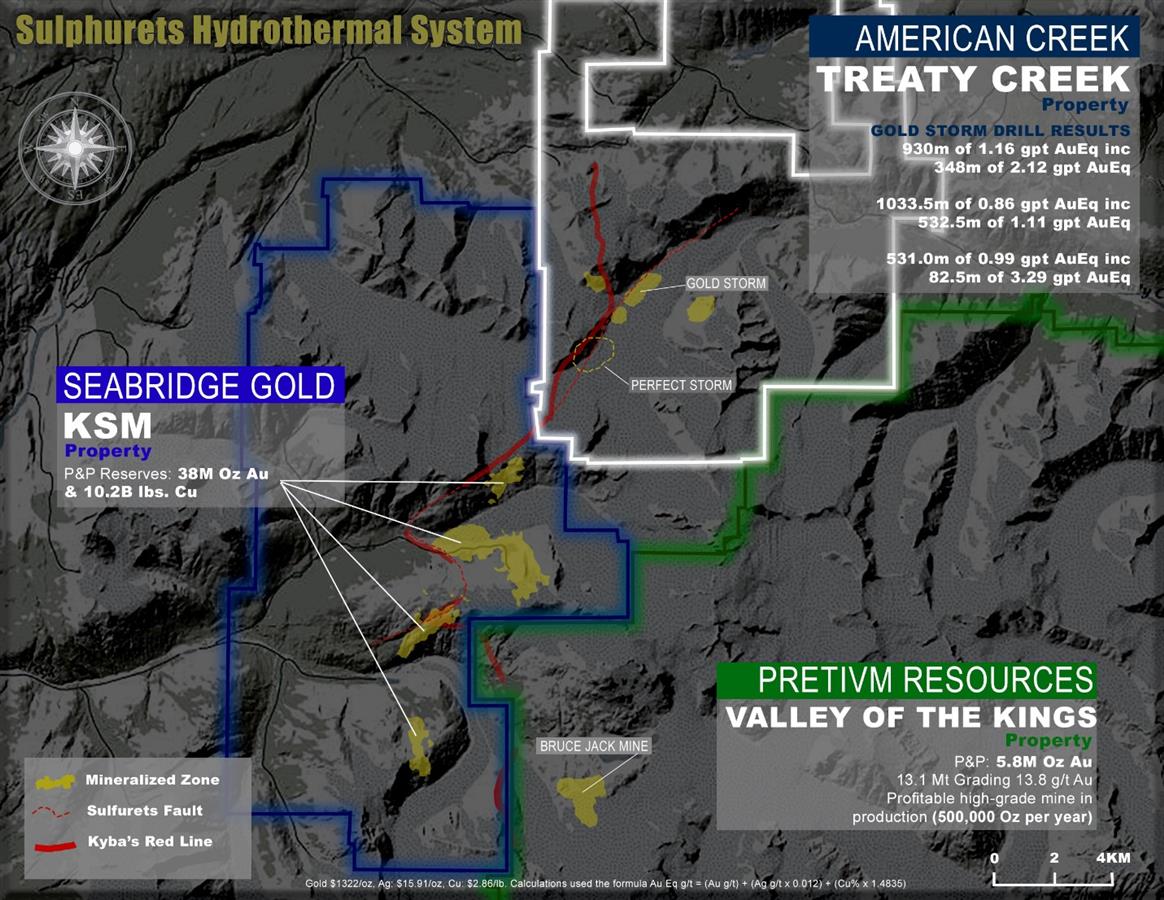 “Treaty Creek has a great shot at having 20 million ounces, the holes are so deep, they have a thousand-meter holes that are running close to a gram a ton and it’s wide open, so I’m very excited about the opportunity there”.

He continues to put his money where his mouth is and has given another huge endorsement to the Treaty Creek project with this latest significant injection of cash. He also made two prior $1,000,000 investments in American Creek earlier in 2019.

The Treaty Creek property is located within one of the largest hydrothermal systems in the world. The Sulphurets Hydrothermal System (SHS) contains numerous world-scale deposits including the high-grade Brucejack mine opened 2017 by Pretium Resources Inc. (TSX.PVG) and Seabridge Gold Inc’s (TSX.SEA) KSM which boasts the largest undeveloped gold deposit by reserves in the world, along with numerous mineralized zones on Treaty Creek.

The SHS’s inferred deposit numbers are astounding. In overall resources, all categories included, the southern half of the system contains 185m oz gold, 740m oz silver, 50bn lbs. copper in resources all categories included. In proven & probable reserves those numbers are 47m oz gold, 214m oz silver, and 10bn lbs copper so far. Treaty Creek covers the northern half of this system. 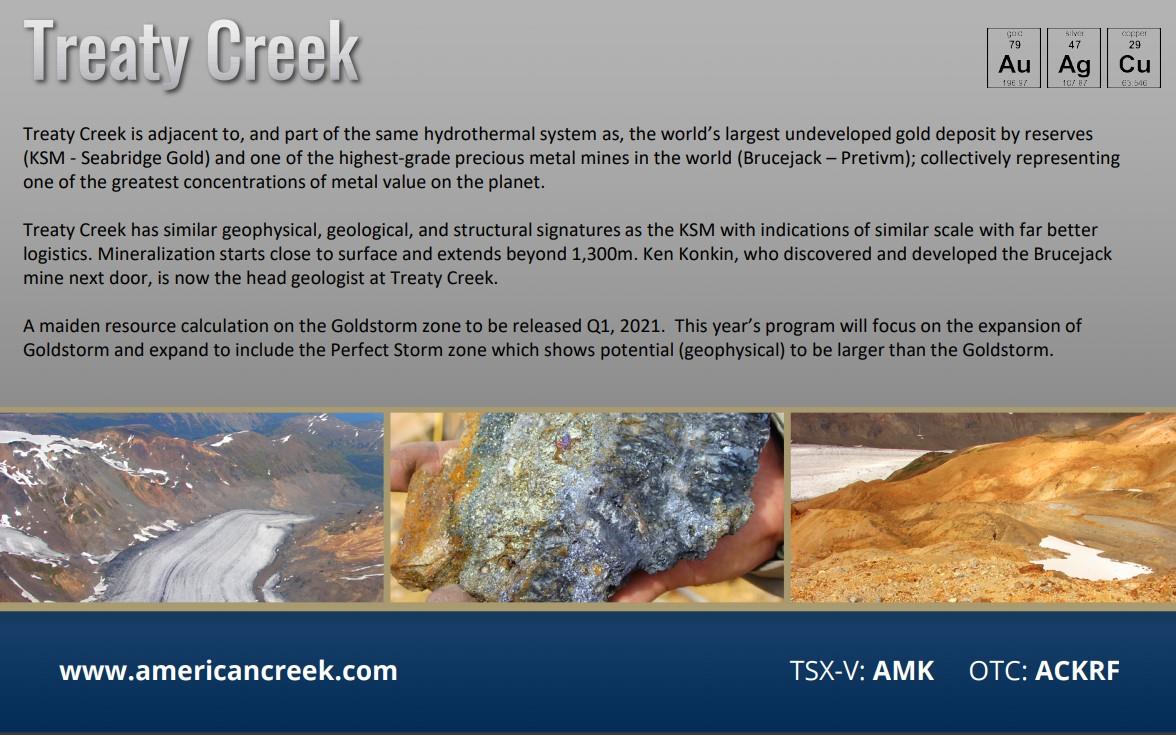 According to the Company, there are several intriguing and noteworthy details about the drill results from the Goldstorm zone at Treaty Creek: 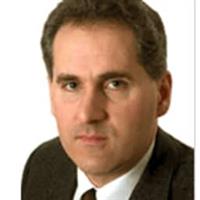 “As I have stated previously, we are extremely pleased with the exploration program our JV partner Tudor Gold has completed this year at Treaty Creek. We sincerely thank and congratulate both the Tudor Gold and More Core Diamond Drilling teams for their outstanding work and accomplishments in 2020. The Treaty Creek project is shaping up to be everything we hoped it would be. We look forward to the upcoming metallurgical work and the maiden resource calculation for the Goldstorm deposit.”

Treaty Creek hosts potential for multiple district scale deposits starting with the Goldstorm zone with much better logistics than the neighbouring KSM deposits (Seabridge). The 2020 drill program ran from May 11th through the first week of December and consisted of 45,600m of diamond drilling designed to delineate a deposit with potential for open pit operations.

In December 2020, Company shareholders received good news in the wake of a successful spinout of the Company’s Dunwell Property, and other properties, assets, and cash to its shareholders by way of a share capital reorganization effected through a statutory plan of arrangement. Under the arrangement, American Creek transferred the assets to its wholly owned subsidiary, Stinger Resources Inc., in consideration for approximately 45,000,000 Stinger common shares. This will allow American Creek’s other project to flourish on their own. American Creek shareholders will benefit by owning both companies.

American Creek Resources has formed a strategic partnership at Treaty with Walter Storm – President and CEO at Tudor Gold Corp. and primary financier of Canadian mining giant Osisko Mining. His previous venture was being the primary funder of Osisko’s Malartic mine which was purchased for under $1 million and sold for CDN$4.5 billion.

The new head geologist for Tudor Gold is Ken Konkin – the former head geologist for Pretium Resources – who spent the last eight years developing and putting the Brucejack mine into production – some six kilometres south of Treaty. Ken brings his knowledge, experience, and expertise of the Sulphurets Hydrothermal System to develop the deposits in its northern half. Mr. Konkin not only believes the northern half has potential for similar scale deposits, but the assays demonstrate the gold – and gold equivalent – values get stronger the further north in the system located on Treaty Creek.

About the Golden Triangle

BC’s prolific Golden Triangle has quickly become one of the premier mining districts in the world. Why? 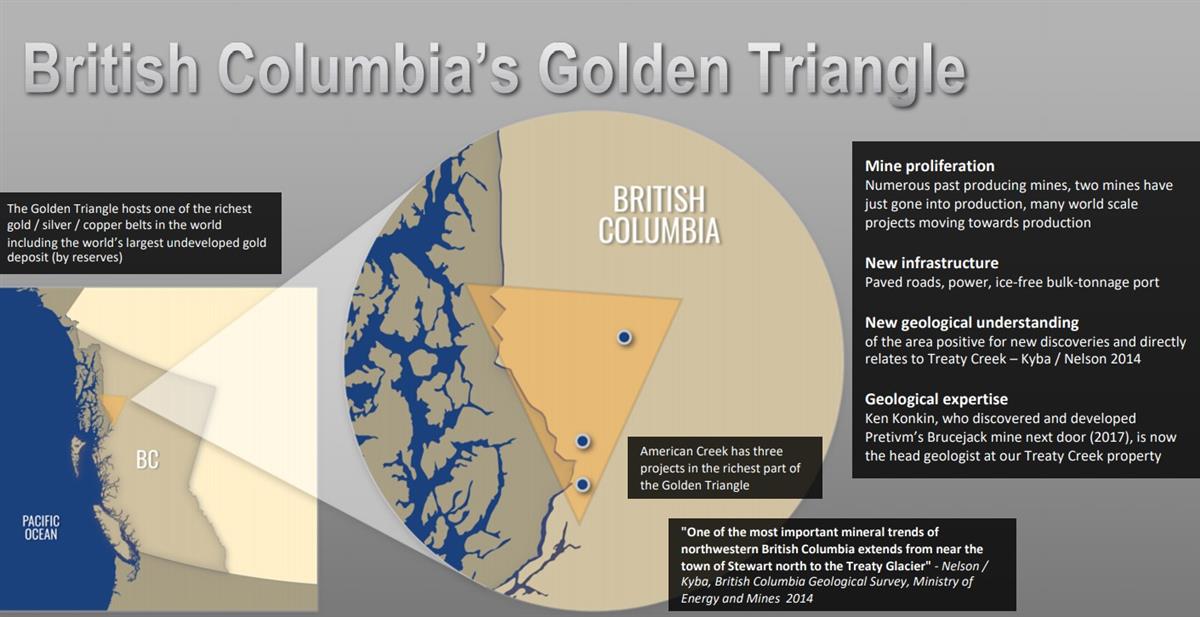 The exit strategy for AMK is to eventually have Treaty Creek be bought by a producer. Because it has the potential to be an open pit design with a large-scale deposit and good logistics, it is already on the radar of many large-scale producing companies.

By 2019, exploration capex in the Golden Triangle exceeded the total spent in versus the rest of the entire province. For now, American Creek’s expectation is to grow as discoveries like the Goldstorm are expanded and developed, and new discoveries are made such as the Perfect Storm, which the company feels will continue to create and add to resource calculations. The company will develop it’s other Golden Triangle properties, including the past producing high-grade Dunwell mine through it’s new subsidiary Stinger Resources.

Scale and Timing of Project

Typically, resource producers wait until a PEA is completed to buy but, in this case, they may be tempted to purchase earlier because of the consistency, logistics and scale of the Treaty Creek Project. Within the gold mining sector, reserves in the ground are now being produced faster than reserves are being created. This produces a squeeze and a higher demand for attractive projects. This is especially true of large-scale projects given most new projects coming online have shorter shelf lives of only 7 to 11 years, with many even shorter. The potential for Treaty Creek to be a generational mine (with possibly decades of) mine life is very attractive.

According to the company, the combination of creating a potentially profitable mine without the extreme capital required by others in the region, visa vis logistics, and the potential for a generational deposit, makes the project a direct target for an earlier than usual buyout that will attract the required funding to advance development. AMK also says it will experience no dilution through this process as it will cost the company “absolutely nothing.”

American Creek’s relationship with Tudor Gold as a JV partner is unique. While a “fully carried” agreement isn’t uncommon, one above 5% or 8% tops is uncommon. The company owns a 20% fully carried interest until a production notice is given. If the project is sold a production order would not be given. Ultimately, this means that it costs AMK zero dollars to develop the project and therefore zero dilution. This would be a fantastic deal for any project but to have this deal on a world-scale project that can costs hundreds of millions of dollars to develop is simply amazing!

The company’s position becomes even more unique when considering the shared asset that is driving the market value of all three companies is Treaty Creek. In turn, this allows AMK’s value to be determined by a mathematical equation opposed to the arbitrary impulses of the public marketplace on any given day. Tudor Gold owns 60% of Treaty Creek and AMK owns 20% creating a 3:1 ratio in ownership. There are a number of ways to do the calculation but they all arrive at the same conclusion – you can take Tudor Gold’s market cap, divide by 0.6 to see the valuation of Treaty Creek, multiply by 0.2 to observe the range that AMK should be valued at. Then divide by the number of AMK shares to see the share price.

Right now, AMK is approximately 22% of the market cap of TUD. The gap between 22% and 33% is the range of discount or value that you receive when buying AMK stock.

Below is a graph to indicate the relationship between the three companies involved produced by the independent Chart Analyst John Newell.

INVESTOR ALERT: Retail and institutional investors have taken note, with a better than four-bagger shareholder valuation increase over the past year. Until notice is given for the date of the spinout people buying AMK shares can “double dip”. 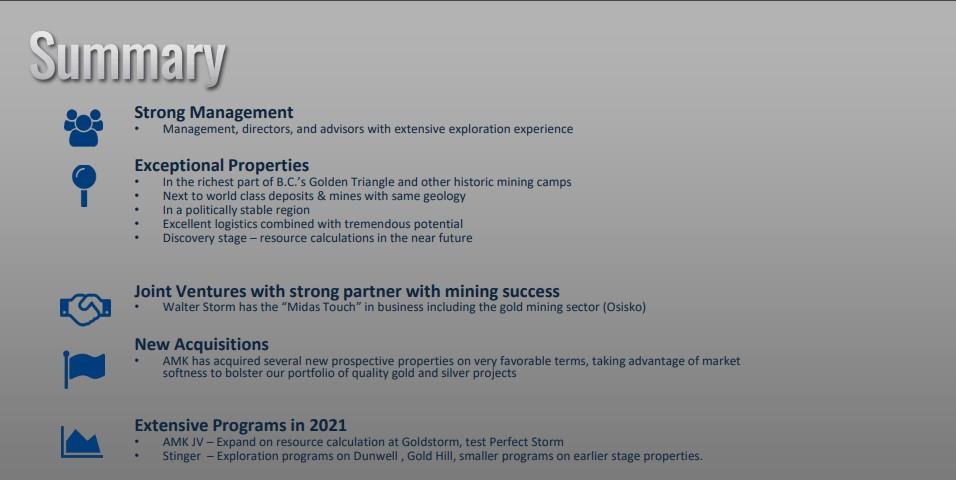 FULL DISCLOSURE: This is a paid article produced by Stockhouse Publishing.