Vizsla Resources Corp. (TSX-V: VZLA) (“Vizsla” or the “Company“) is pleased to announce additional drilling results from the Napoleon Vein Corridor at the Panuco silver-gold project in Mexico. A total of eleven holes have been completed to date at Napoleon with results returned for the mineralized intervals of four holes.Â  High grade intercepts have been returned.Â  The Company has two drill rigs operating on the project testing multiple targets.

Vizsla President and CEO, Michael Konnert, commented: “We are thrilled with these high grade results as they support our understanding that the Napoleon vein system remains open along trend to the north and south and at depth. With a 14,500 metre drill program underway, The Company will continue to drill the Napoleon vein system and the multiple other drill targets in vein systems across the Panuco district. Our second rig is currently turning at Cordon del Oro. Being fully-funded, Vizsla intends to provide steady drilling news flow over the summer months.”

The Napoleon Vein Corridor is located almost entirely on concessions optioned from Rio Panuco which Vizsla has the right to purchase 100% of including the 500 tonne per day El Coco mill, tailings facility, roads, power and permits for a total of US$23,000,000. 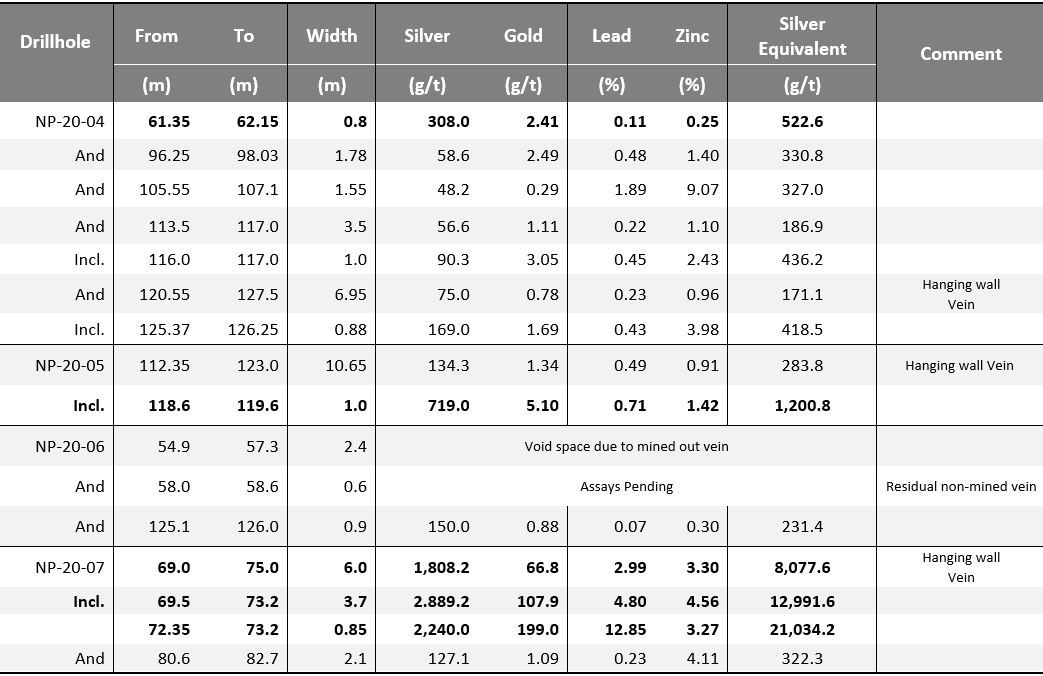 The Napoleon corridor is hosted in weakly magnetic fine-grained diorite and trends approximately north – south.Â  The structure hosts two main quartz veins that are separated by some 10 to 20 metres and appears to dip very steeply to sub-vertical.Â  So far it has been mapped along strike for over 2,000 m.Â  Between the two main veins are a series of smaller splay veins with variable orientations, that are related to dilation along the structure under strike slip movement.

The two main veins are multi-episodal quartz veins, with sections of massive white to greyish quartz as well as local brecciation with clasts of grey quartz, white vein quartz and / or wallrock pieces.Â  The greyish quartz is grey due to the presence of the very fine-grained silver rich sulphide mineral argentite.Â  A later breccia cuts these earlier phases comprising grey quartz supporting polymictic clasts of grey and white quartz along with strong chlorite and common to abundant, fine to medium grained pyrite, sphalerite and galena.

Hole NP-20-06 is located 60m to the north of NP-20-03 and intersected the old mine workings at the target depth.Â  A narrow interval of un-mined vein is awaiting assay results.Â  Further down the hole (to the west) a narrow well mineralized vein was intersected at 125.1m.

Hole NP-20-07 was a steep hole that tested the main hanging wall vein 20m downdip from hole NP-20-06.Â  The vein is dark grey with a semi-massive sulphide mineralization and little white or grey quartz.Â  Further down the hole a second mineralized vein was intersected.Â  This bonanza grade material was likely the focus of historical mining within the now inaccessible Napoleon mine.

Hole NP-20-08 was drilled steeper again and intersected the main vein and multiple additional veins into the footwall of the Napoleon structural corridor.Â  Assays are pending for this hole.

Holes NP-20-09 and NP-20-10 were drilled off section to the south and north (of holes NP-20-06, -07 and -08), respectively and intersected veining.Â  Lastly Hole NP-20-11 has just been completed to the south of the discovery hole NP-20-02.Â  It intersected the main vein. These holes are being logged and sampled prior to shipping for assay.

Drilling has intersected the Napoleon vein over 150m of strike and it remains open to the north, south and at depth.

About the Panuco project

Vizsla has an option to acquire 100% of the newly-consolidated 9,386.5 Ha Panuco district in southern Sinaloa, Mexico, near the city of MazatlÃ¡n.Â  The option allows for the acquisition of over 75 km of total vein extent, a 500 tpd mill, 35 kms of underground mines, tailings facilities, roads, power and permits.

The district contains intermediate to low sulfidation epithermal silver and gold deposits related to siliceous volcanism and crustal extension in the Oligocene and Miocene. Host rocks are mainly continental volcanic rocks correlated to the Tarahumara Formation.

Drill core and rock samples were shipped to ALS Limited in Zacatecas, Zacatecas, Mexico and in North Vancouver, B.C. Canada for sample preparation and for analysis at the ALS laboratory in North Vancouver. Â The ALS Zacatecas and North Vancouver facilities are ISO 9001 and ISO/IEC 17025 certified. Silver and base metals were analyzed using a four-acid digestion with an ICP finish and gold was assayed by 30-gram fire assay with atomic absorption (“AA”) spectroscopy finish. Overlimits analyses for silver, lead and zinc were re-assayed using an ore-grade four-acid digestion with AA finish.

Panuco’s disclosure of technical or scientific information in this press release has been reviewed and approved by Stewart Harris, P.Geo., an independent consultant for the Company. Mr. Harris is a Qualified Person as defined under the terms of National Instrument 43-101.

This news release includes certain “Forwardâ€Looking Statements” within the meaning of the United States Private Securities Litigation Reform Act of 1995 and “forwardâ€looking information” under applicable Canadian securities laws. When used in this news release, the words “anticipate”, “believe”, “estimate”, “expect”, “target”, “plan”, “forecast”, “may”, “would”, “could”, “schedule” and similar words or expressions, identify forwardâ€looking statements or information. These forwardâ€looking statements or information relate to, among other things: the development of Panuco, including drilling activities; future mineral exploration, development and production; and completion of a maiden drilling program.

Forwardâ€looking statements and forwardâ€looking information relating to any future mineral production, liquidity, enhanced value and capital markets profile of Vizsla, future growth potential for Vizsla and its business, and future exploration plans are based on management’s reasonable assumptions, estimates, expectations, analyses and opinions, which are based on management’s experience and perception of trends, current conditions and expected developments, and other factors that management believes are relevant and reasonable in the circumstances, but which may prove to be incorrect. Assumptions have been made regarding, among other things, the price of silver, gold and other metals; no escalation in the severity of the COVID-19 pandemic; costs of exploration and development; the estimated costs of development of exploration projects; Vizsla’s ability to operate in a safe and effective manner and its ability to obtain financing on reasonable terms.

These statements reflect Vizsla’s respective current views with respect to future events and are necessarily based upon a number of other assumptions and estimates that, while considered reasonable by management, are inherently subject to significant business, economic, competitive, political and social uncertainties and contingencies. Many factors, both known and unknown, could cause actual results, performance or achievements to be materially different from the results, performance or achievements that are or may be expressed or implied by such forwardâ€looking statements or forward-looking information and Vizsla has made assumptions and estimates based on or related to many of these factors. Such factors include, without limitation: the Company’s dependence on one mineral project; precious metals price volatility; risks associated with the conduct of the Company’s mining activities in Mexico; regulatory, consent or permitting delays; risks relating to reliance on the Company’s management team and outside contractors; risks regarding mineral resources and reserves; the Company’s inability to obtain insurance to cover all risks, on a commercially reasonable basis or at all; currency fluctuations; risks regarding the failure to generate sufficient cash flow from operations; risks relating to project financing and equity issuances; risks and unknowns inherent in all mining projects, including the inaccuracy of reserves and resources, metallurgical recoveries and capital and operating costs of such projects; contests over title to properties, particularly title to undeveloped properties; laws and regulations governing the environment, health and safety; the ability of the communities in which the Company operates to manage and cope with the implications of COVID-19; the economic and financial implications of COVID-19 to the Company; operating or technical difficulties in connection with mining or development activities; employee relations, labour unrest or unavailability; the Company’s interactions with surrounding communities and artisanal miners; the Company’s ability to successfully integrate acquired assets; the speculative nature of exploration and development, including the risks of diminishing quantities or grades of reserves; stock market volatility; conflicts of interest among certain directors and officers; lack of liquidity for shareholders of the Company; litigation risk; and the factors identified under the caption “Risk Factors” in Vizsla’s management discussion and analysis. Readers are cautioned against attributing undue certainty to forwardâ€looking statements or forward-looking information. Although Vizsla has attempted to identify important factors that could cause actual results to differ materially, there may be other factors that cause results not to be anticipated, estimated or intended. Vizsla does not intend, and does not assume any obligation, to update these forwardâ€looking statements or forward-looking information to reflect changes in assumptions or changes in circumstances or any other events affecting such statements or information, other than as required by applicable law