Of the 6 holes drilled at Starlight; observed alteration, stockworking and mineralization increased with stepout holes to the southeast.Â  The farthest southeast holes, as well as intersecting the targeted vein/stockwork zone where native gold was identified in the hangingwall vein, also discovered a new and significant zone of copper-gold mineralization below the known stockwork zone.

As drill holes DL21-13 and DL21-14 are the farthest southeast on a northwest striking, steeply southwest dipping structure, the system is clearly open to the southeast where a strong magnetic low feature trends along strike for an additional 2,000 metres.Â  Holes DL21-09 and DL21-10 were located 130 metres to the northwest and holes DL21-11 and DL21-12 were an additional 80 metres further northwest.

The Starlight Trend, identified as a wide shear structure represented by a strong magnetic low feature, is located on the western side of the Daylight Property.Â  The successful drill program tested the northwesternmost 210 metres of the historic gold zone which is exposed at surface and in numerous small-scale underground mine workings over a strike length of 2,000 metres.Â  The Starlight veins+sulphide zone averages 25 metres true width with large discrete outlier quartz veins also exhibiting strong silica-sulphide mineralization.

Drill holes DL21-13 and 14 were drilled from the same collar location toward the southeast at -45o and -75o dips.Â  Both holes intercepted the 20 to 25 metre true width zone containing quartz veining, abundant pyrite and chalcopyrite, along with minor sphalerite and occasional native gold grains.Â  Above the veinlet zone, in the top 65 metres of the drill holes, are 10-15 metre wide moderately quartz-carbonate stockworked zones with discrete larger quartz-carbonate veins ranging from 0.52 to 1.9 metres width containing pyrite and minor chalcopyrite.

Note:Â  Vein widths reported approximate true widths.Â  The true widths of the CuEq* zones listed in the above table are not known as additional drilling is required to determine the zone width.

“The discovery of a new broad zone of significant copper-gold mineralization in the footwall is tremendously exciting for the Company and endorses the robust potential of the overall Kena project”, states Nicholas Houghton, President and CEO of West Mining Corp.Â  “We are also very excited with the results of the drilling along the Starlight Trend which delivered extremely encouraging numbers. Â Furthermore, the host structure stretches for 2 kilometres along strike, with the current program having only tested a fraction of this open ended and continuing system”.

*Note:Â  These historic values cannot be relied upon, however the locations of the old mine workings have been verified by West Mining Corp. geologists and were used to assist with planning for the current exploration program.

Additional drilling in planned to the southeast along the Starlight Trend, to follow the Starlight vein and the newly discovered, significant footwall structure containing broad widths of copper-gold porphyry-style mineralization.

One each of blank, field duplicate and standard is inserted into the sample stream for every 20 drill core samples.Â  Core samples are split, bagged, zip-tied and trucked to Bureau Veritas Commodities Canada Limited (“BV Labs”) in Burnaby, British Columbia for analyses.Â  The field inserted standards (certified reference materials) and blanks were purchased from CDN Resource Laboratories Ltd. of Langley, British Columbia.

Samples are analyzed at BV Labs facilities for gold by fire assay with an atomic absorption finish and 48 additional elements were analyzed using a multi-acid digestion with an ICP-ES finish.Â  Samples with visible native gold mineralization are analysed for gold by metallic screening plus a duplicate fire assay of the fine fraction.

BV Labs are registered to ISO 9001:2008 and ISO 17025:2017 accreditations for laboratory procedures. Â In the laboratory, blanks (analytical and method), duplicates and standard reference materials are internally inserted in the sequences of client samples.Â  Using these inserted quality control samples each analytical batch and complete job is rigorously reviewed and validated by BV Labs prior to release.

Linda Dandy, P.Geo., a “Qualified Person” for the purpose of National Instrument 43-101, has reviewed and approved the contents of this news release.

The Kena Property also hosts the large Kena Copper Zone, along withÂ  the historic Euphrates and Gold Cup gold-silver mines.Â  The Daylight property contains the historic past producing Daylight, Starlight, Victoria, Irene and Great Eastern gold mines.Â Â AlongÂ trend to the north is the Athabasca Property, with the historic Athabasca Gold Mine.Â  The historic mines and known mineralized zones on these three properties are structurally controlled along a 20 kilometre strike as identified by strong geophysical signatures. 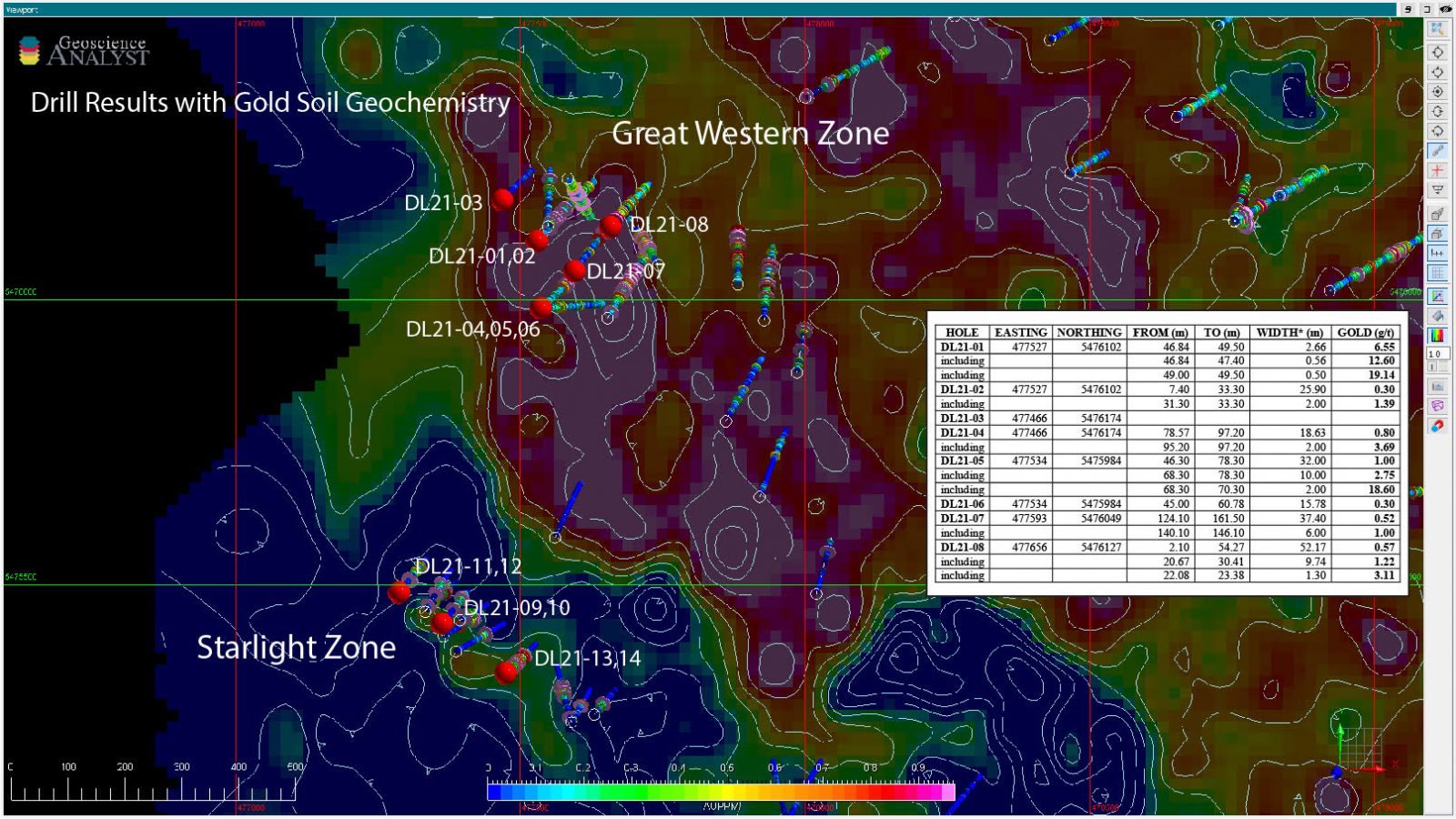 The Canadian Securities Exchange accepts no responsibility for the adequacy or Â accuracy of this release.