Saskatchewan is the largest exporter of agri-food products in Canada; however, it is also notable for hosting a variety of mineral resources and even heat for a new geothermal plant.

The Prairie province has approximately half of the world’s potash reserves and 8% of the world’s recoverable uranium reserves. The Athabasca basin of northern Saskatchewan has the world’s highest grade uranium mines. Its 2019 production of 18 million pounds of U3O8 are being used in Canada and globally to generate some 306 billion kilowatt hours of electricity which is equivalent to powering about 28 million homes with an almost zero carbon footprint – and there is a great deal of uranium yet to be discovered and to mine. Proven and Probable Reserves stand at 565.8 million pounds U3O8.

Global demand for electricity is expected to grow 76% by 2030, plus the increasing power usage through charging electric vehicles. The world is going to need a great deal of uranium as there are 442 current operable reactors, 54 reactors under construction, 439 reactors ordered, planned and proposed which could lead to a uranium shortage.

It has been estimated that between 2008 and 2028 the Saskatchewan mineral industry will invest over $50 billion in expansions and new mines.

For years, Saskatchewan has been near the top of favourable jurisdictions for exploration and mining investment which has encouraged mineral explorers to seek out prospective properties to investigate, particularly in light of higher gold and uranium prices. 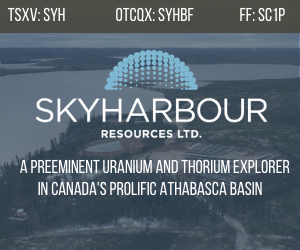 The company’s 2020 summer diamond drilling program is underway at its flagship 35,705-hectare Moore uranium project, located approximately 15 km east of Denison Mines’ Wheeler River Project and near regional infrastructure on the southeast side of the Athabasca basin.

Skyharbour acquired from Denison, a large shareholder of Skyharbour, a 100% interest in the Moore uranium project 39 km south of Cameco’s McArthur River uranium mine.

Moore is an advanced-stage uranium exploration property with high-grade uranium mineralization at the Maverick Zone. Historical drill results have returned up to 6% U3O8 over 5.9 metres, including 20.8% U3O8 over 1.5 metres, at a vertical depth of 265 metres.

Jordan Trimble, President and CEO of Skyharbour, recently stated: “We are excited to have this fully funded drill program commence at our flagship Moore uranium project. This will serve as an important near-term catalyst for the company as we continue to drill test the fertile Maverick structural corridor with the intent of expanding known high-grade zones as well as discovering new ones. Partner-funded exploration programs at Skyharbour’s other projects are slated to commence shortly as well. The uranium market has recently shown notable signs of an accelerating recovery including increasing uranium prices and improving sentiment as we enter a more seasonally active time of year. This acceleration appears to be due to several sector developments including mine closures and production curtailment.”

Additional drilling is also planned along the western extension of the Maverick structural corridor west of the Main Maverick Zone.

While focused on its core strategy as a discovery-driven exploration company, Skyharbour also employs the prospect generator model to advance and fund exploration at its other projects in the Athabasca basin.

As a part of Skyharbour’s prospect generator business, the company has signed option agreements whereby Orano Canada and Azincourt Energy can earn in up to 70% of the Preston Project through a combined $9.8-million in total exploration expenditures, as well as $1.7-million in total cash payments and Azincourt shares.

The company also owns the Falcon Point Uranium and Thorium Project which hosts an NI 43-101 compliant uranium resource as well as a high-grade uranium surface showing.

Skyharbour Resources has a strong management and technical team with track record of success. The company has 92.6 million shares outstanding.

Appia Energy Corp. [API-CSE; APAAF-OTCQB] is currently focused on delineating high-grade critical rare earth elements (REE) and uranium on its 100%-owned Alces Lake property as well as prospecting for high-grade uranium on its Loranger, North Wollaston, and Eastside properties – all located in the prolific Athabasca Basin area of northern Saskatchewan.

All the rare earths have simple mineralogy and are hosted 100% within monazite. The monazite host rock is enriched in valuable “critical” rare earth elements (CREE). CREE represents Neodymium (Nd), Praseodymium (Pr), Dysprosium (Dy) and Terbium (Tb). These four elements account for 23-25% of the TREO and represent ~85% of the potential value at Alces Lake.

The project is located close to a pilot plant and REE extraction lab in Saskatoon, Saskatchewan which is owned and operated by the Crown corporation Saskatchewan Research Council. 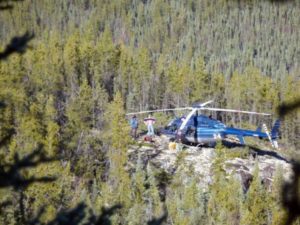 James Sykes, Vice-President, Exploration and Development, said: “Having confirmed our recently discovered showings, Ermacre and Oldman, as high-grade REE surface exposures is very exciting for us. Ermacre, located 600 metres northwest of the Charles Zone(s), now represents the most northern occurrence of high-grade REE mineralization exposed at surface on the property. We will continue Phase II exploration (diamond drilling) along the Ermacre-Hinge to Charles-Wilson corridor in search for continuity of the REE minerals system and additional high-grade REE zones. The Oldman and Ken occurrences, 6.5 and 7.5 km southwest of the Charles-Wilson zones, clearly demonstrate the extent to which the system can occur along our property’s 40 km-long geological trend. The confirmation of high-grades at Hawker is very encouraging. The historic Hawker workings will be targeted further in order to maximize the company’s potential for both REEs and uranium.”

Since detailed exploration began at Alces Lake in 2017, a total of 74 REE and uranium-bearing surface zones and occurrences of the REE and uranium minerals system(s) have been discovered on the property. To date, less than 15% of the property surface has been explored on the ground. Surface channel and diamond drill samples from within six zones (Bell, Charles, Dante, Dylan, Ivan, Wilson) have returned an average composite grade of 16.65 wt% TREO.

The company also has a 100% interest (subject to a 1% Uranium Production Payment Royalty and a 1% Net Smelter Return Royalty on any precious or base metals payable, provided that the price of uranium is greater than US$130/lb) in 12,545 hectares, with rare earth element and uranium deposits over five mineralized zones in the Elliot Lake Camp, northern Ontario.

SKRR Exploration Inc. [SKRR-TSXV; SKKRF-OTC] is active on several gold projects in Saskatchewan, including its flagship Olson property. The property is located within the Trans-Hudson corridor 100 km east of La Ronge, Saskatchewan, and 80 km south of SSR Mining’s Seabee gold operation. Under the terms of the option agreement with Eagle Plains Resources, SKRR may earn in up to a 75% interest in the property.

The Olson property has the same regional geology as the Santoy Mine and Seabee Mill, both high grade/high margin gold mining operations. Preliminary exploration at Olson has identified gold mineralization at several locations, including drilling intercepts of 18.3 metres grading 1.11 g/t gold and 8.5 metres of 2.82 g/t gold. 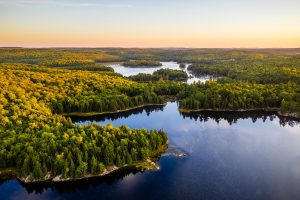 The 2020 Olson exploration program defined widespread gold mineralization in both soil samples and rock channel samples. Assay results include 17 rock samples over one g/t gold and 35 soil samples values over 0.1 g/t (100 parts per billion) gold. In the Jena-Juba trend, four samples returned assay results over one g/t gold with the highest value (OMOLR014) being 14.7 g/t gold from a sample of quartz vein.

With the information gathered in the first phase of exploration, the upcoming Phase 2 drilling program at Olson will target historically drilled zones, as well as previously undrilled and underexplored showings, both with a new understanding of gold mineralization controls.

To date, the Olson project area is host to 29 mineral occurrences defined by historical geological mapping, prospecting, trenching and 4,700 metres of diamond drilling.

In another development, SKRR Exploration has received a Level 2 exploration permit from the Saskatchewan Ministry of Environment authorizing work on the Leland gold property located 23 km southwest of SSR Mining’s Seabee gold operation. Under the terms of the option agreement with Taiga Gold, SKRR may earn up to a 75% interest in the property.

Fieldwork will include detailed prospecting and mapping, infill soil geochemical sampling, channel sampling of trenches, and ground truthing of electromagnetic anomalies generated by a 2019 drone survey. Results from the 2020 program will be integrated with historical data to identify targets for diamond drill testing.

In 2019, Taiga completed a three-phase geological and geophysical program with sampling highlights that included mineralization grading up to 5.4 g/t gold over 0.65 metres within 2.1 g/t gold over 3.22 metres (channel sample) from the Irving trench along the Simon-Irving trend.

The 2019 work discovered five new gold-mineralized occurrences along the Simon-Irving trend grading between 113 parts per billion gold and 3.5 g/t gold.

SKRR can also earn a 100% interest in the Irving Lake claims 120 km northeast of the town of La Ronge.

SKRR Exploration is already seeing encouraging exploration results from its Saskatchewan projects that bode well for more gold discoveries in these underexplored areas.