The non-brokered private placement of 8,893,635 charity flow-through shares are priced at $0.285 per share with total gross proceeds of $2,534,686. In a second-step transaction, and part and parcel of the completion of the Offering, New Gold Inc. acquired the 8,893,635 shares at a 30 % discount to the subscription price.

“Building strategic relationships with active partners in our community and jurisdiction is essential to Ximen’s long-term goals. Ximen is looking forward to enhancing its relationship with New Gold. Their initial decision to invest in Ximen projects and development plans is an excellent starting point,” states Christopher R. Anderson, Ximen’s President and CEO.

The Company will use the net proceeds from the Offering for exploration expenses on the Company’s British Columbia mineral properties.

The Shares are being issued as part of a charity flow-through arrangement. The Company will pay no commission or finders’ fee in connection with this Offering. The Offering is between arm’s length parties, and all securities issued pursuant to the Offering are subject to the applicable statutory hold period of four months and one day from the closing. The Offering is subject to the final approval of the TSX Venture Exchange.

Ximen Mining Corp. is focused on acquiring high-grade gold assets in southern BC, with easy access and solid infrastructure. Ximen aims to build a gold mining company with the blue-sky potential of a land package with multi-million ounces of gold. Ximen strives to always to take a 100% interest in all its projects and assets. The Company has bought out all the possible NSR’s on its key mineral precious metal assets and several other assets in the vicinity of its holdings. Simultaneously, Ximen is advancing the Kenville Gold Mine forward and on the path towards production. The focus remains on meeting all the established targets while at the same time maintaining aversion towards debt and dilution. All while moving forward with responsible development and sustainable mining and exploration practices building Ethical and Sustainable Value. 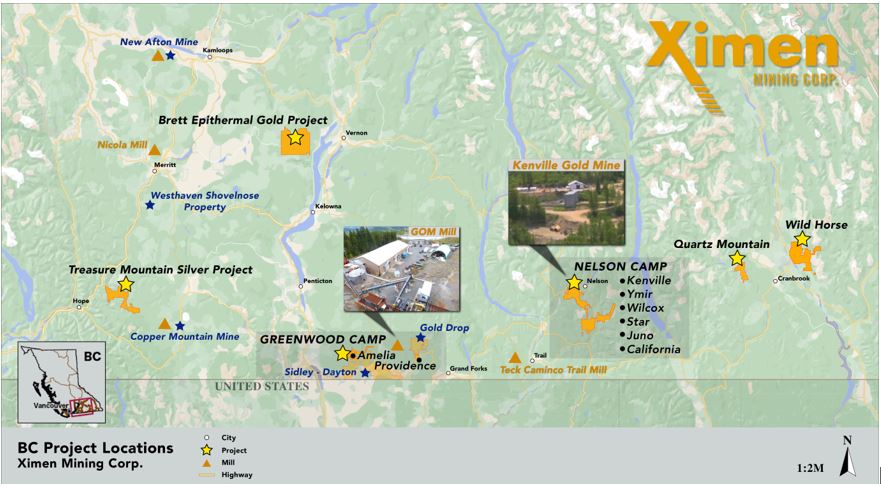 This press release contains certain “forward-looking statements” within the meaning of Canadian securities. This press release contains certain “forward-looking statements” within the meaning of Canadian securities legislation, including statements regarding the receipt of TSX Venture Exchange approval and the exercise of the Option by Ximen. Although the Company believes that such statements are reasonable, it can give no assurance that such expectations will prove to be correct. Forward-looking statements are statements that are not historical facts; they are generally, but not always, identified by the words “expects,” “plans,” “anticipates,” “believes,” “intends,” “estimates,” “projects,” “aims,” “potential,” “goal,” “objective,” “prospective,” and similar expressions, or that events or conditions “will,” “would,” “may,” “can,” “could” or “should” occur, or are those statements, which, by their nature, refer to future events. The Company cautions that forward-looking statements are based on the beliefs, estimates and opinions of the Company’s management on the date the statements are made, and they involve a number of risks and uncertainties. Consequently, there can be no assurances that such statements will prove to be accurate and actual results and future events could differ materially from those anticipated in such statements. Except to the extent required by applicable securities laws and the policies of the TSX Venture Exchange, the Company undertakes no obligation to update these forward-looking statements if management’s beliefs, estimates or opinions, or other factors, should change. Factors that could cause future results to differ materially from those anticipated in these forward-looking statements include the possibility that the TSX Venture Exchange may not accept the proposed transaction in a timely manner, if at all. The reader is urged to refer to the Company’s reports, publicly available through the Canadian Securities Administrators’ System for Electronic Document Analysis and Retrieval (SEDAR) at www.sedar.com for a more complete discussion of such risk factors and their potential effects.